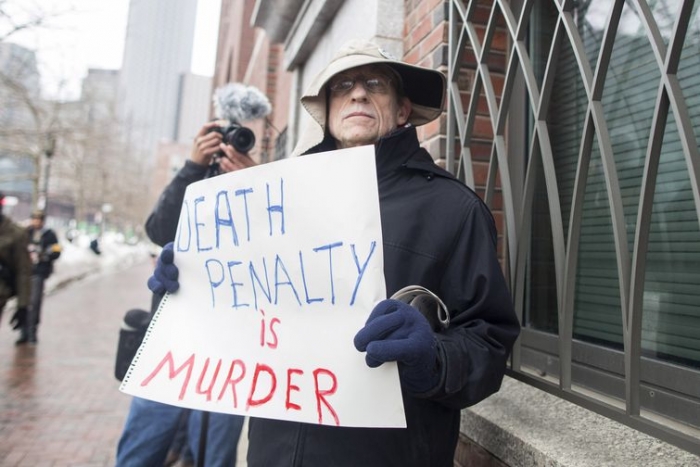 Nebraska's conservative legislators "argued that the death penalty is a wasteful and ineffective government program that costs too much and accomplishes too little," according to Robert Dunham, the executive director of the Death Penalty Information Center. That's probably correct: because of intense and extended litigation, imposing the death penalty in the US is significantly more expensive than sentencing someone to life without parole.

NEWS
The Next to Die: Watching Death Row
The Marshall Project

On March 7, 1965, some 600 civil rights activists marched in Selma, Alabama, demanding an end to racial discrimination. The demonstration was led by now-Rep....

Nathaniel Woods was executed in Alabama on Thursday (March 6), despite a temporary stay on the execution and pleas to reconsider the evidence against him in a...

The son of Martin Luther King has joined a growing list of activists and celebrities calling on Alabama’s governor to stop the planned execution of an inmate...

A Liar’s Testimony Convinced a Jury to Convict a Man of Murder. Will Florida Execute Him Anyway?

Two months after ProPublica and The New York Times Magazine published a joint investigation that cast doubt on key testimony in a Florida death penalty case,...

The Justice Department on Thursday said it would go back to executing federal death-row inmates for the first time in nearly two decades—a move capital...

The Next to Die: Watching Death Row

Looking back, we know quite a bit about who has been put to death in the United States. We know that the last person to be executed was Nathaniel Woods, who...

How quickly should courts change the law? Florida tests the limit.

Respect for precedent has been a cornerstone of the American legal system. But what happens if, to “fix mistakes” in the law, courts favor rapid change that...

(Reuters) - Dylann Roof, the white supremacist who killed nine black people at a South Carolina church in 2015, has appealed his conviction and death sentence...

COLUMBUS, Ohio – An Ohio lawmaker has an innovative solution to the state's problem with securing execution drugs: use fentanyl seized by police instead....

The Trump administration asked the Supreme Court Monday night to clear the way for four federal executions, after a judge in Washington, D.C., put them on hold...

“Find and fry the leaker or leakers. Burn them. We have to make an example of them.” Vice President Dick Cheney issued that edict after whistleblower Thomas...

Georgia Intends to Execute This Man, Whether or Not He Pulled the Trigger

The State of Georgia plans to execute Ray Jefferson Cromartie, 52, at the end of the month. DNA evidence might prove that another man pulled the trigger, but...

This is not jurisprudence but jurispretext. The headlines say the justices of the Supreme Court are “openly feuding” and “sniping” at one another over the...