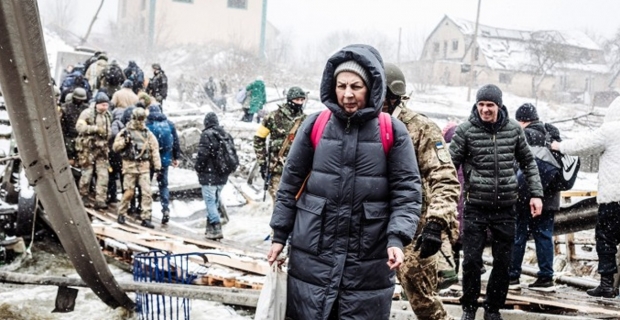 As Russia's invasion of Ukraine continues, so do questions about how the U.S. and other world powers may get involved.

The U.S. has been hesitant to offer Ukraine direct military support over fear of provoking an armed conflict with Russia. A plan for the U.S. and Poland to help provide more fighter jets to Ukraine's air force fell through, and Ukrainian President Volodymyr Zelenskyy implored U.S. leaders to help him defend against Russia while addressing Congress via video call on Wednesday. The same day, the White House announced an additional $800 million in military aid for Ukraine.

As Ukraine looks for help, so does Russia and President Vladimir Putin. The country reportedly called on China to provide military assistance for the invasion, and has also looked to fighters from Syria and other countries. The U.S. has warned China against getting involved. Elsewhere, India and many European nations continue to grapple with energy dependence on Russia and the future of trade and geopolitics in the region.

Voices across the American political media spectrum generally oppose direct U.S. involvement in the conflict, and survey data suggests that a majority of Americans agree. Commentators on the right generally focus on ways to support Ukraine's military without provoking Russia. The left focuses more on foreign aid through humanitarian efforts and refugee programs.

"The EU and US help Ukraine, China helps Russia; if that's how this goes, then it's a delineation that will make the war in Ukraine an even more consequential one. The White House has decided to make public its claim just as President Biden's top security adviser is due to meet China's most senior diplomat. It appears to be a tactical move, to put pressure on China; presumably to either confirm or deny it."

What the $800 million US security aid package to Ukraine includes

"It includes missile defense systems and drones that Zelensky requested, but not the Polish MiG-29 fighter jets that the Kyiv government has sought to help secure the skies. Here’s a rundown of what’s in the package, according to the White House: 800 ​Stinger anti-aircraft systems; 2,000 ​Javelin​ anti-tank missiles; 1,000 light anti-armor weapons; 6,000 AT-4 anti-armor weapons..."

"He can start by abandoning his fixation on Russian threats of escalation over the transfer of fighter jets to Ukraine, whose air force has been depleted. Ukrainian pilots could fly these jets home from U.S. military bases in Europe. The jets would then help Ukraine confront Russian bombers and ground support aircraft that are causing so much destruction — what Zelensky described as 'a terror that Europe has not seen for 80 years.'"

"Here in the middle of former President Donald Trump’s Midwest base, in a state where a sense of economic malaise lands hard on rural and working-class voters, many Republicans see higher gas prices as a small price to pay to help defend Ukraine."

What Is Our Moral Obligation in Ukraine?

"I say that the United States must supply military aid and should supply humanitarian aid. But I also say that we must be more consistent in determining who deserves outpourings of our humanitarian impulses. Human suffering is human suffering. It has been a constant in the story of mankind. Sometimes it overlaps with our national interests, and sometimes it does not. But our sense of morality must remain constant, and in it we must find a place for equity."