As Russian President Vladimir Putin continues his invasion of Ukraine, China's allegiances and purported plans to get involved are in the spotlight.

Reports across the spectrum suggest that China has shown a willingness to provide military support to Russia. As Russian forces reportedly run low on supplies, the country is believed to have asked China for ​equipment and other support. During a phone call with Russian leaders a day after the invasion, China's foreign minister said China "respects each country's sovereignty and territorial integrity" but also understands "Russia's reasonable concern on security issues." Weeks before the invasion, Putin and Chinese President Xi Jinping met and released a joint statement touting their "no limits" partnership.

Right-rated voices often called on the U.S. to take more steps to aid Ukraine and limit the impact of Chinese assistance for Russia. Some compared Putin's invasion to China's purported plans to take over Taiwan, and stressed the importance of Russian failure in Ukraine in order to make China reconsider. Writing a guest essay for the New York Times, the founder of a Beijing-based think tank that advises the Chinese government argued that China could mediate a solution to the conflict that would give Putin "sufficient security assurances" and protect "Ukraine’s core sovereignty," and said "there is no country better placed to do so." A writer for National Review (Right bias) responded to that essay, accusing the Times of publishing Chinese propaganda and downplaying the writer's connections to the Chinese government. 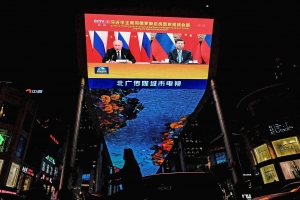 Casualties are mounting in Ukraine. Bombs continue to fall. More than 2 million refugees have fled the fighting.

Vladimir Putin seems to have assumed he could get a swift victory, underestimating the fierce resistance from Ukraine. Two weeks in, Russia is intensifying its assault on Ukraine, and Western nations in turn are intensifying their financial and economic punishments against Russia, including by triggering the financial “nuclear option” — banning some Russian banks from the SWIFT payment system. Meanwhile, Mr. Putin has put his actual nuclear forces on high alert.

Read full story
Some content from this outlet may be limited or behind a paywall.
See full media bias rating for New York Times (Opinion)
From the Center
1737
China
China's Behind-the-Scenes Role in Ukraine War
Newsweek 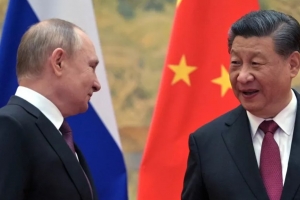 Xi Jinping's role in Ukraine is far less visible than Vladimir Putin's, but make no mistake: China is also a combatant in the war. What isn't yet clear is whether China will feel the consequences as Russia has.

On Friday, President Joe Biden announced that the United States, along with NATO members, European Union countries, and Group of Seven nations, will withdraw "most favored nation" trade privileges for Russia. Biden also announced bans on imports of Russian goods—seafood, vodka, and diamonds—and a prohibition on exports of luxury items.

These actions, at least on their face, run afoul of...

Read full story
Some content from this outlet may be limited or behind a paywall.
See full media bias rating for Newsweek
From the Right
1737
China
China won’t let Putin lose his ugly Ukraine war
New York Post (Opinion) 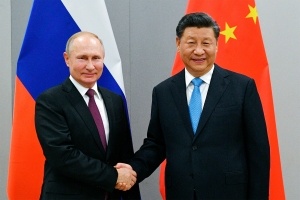 Who needs enemies when you have friends like Vladimir Putin?

This is what Xi Jinping must be thinking just six weeks after the two announced a “no limits” friendship to make the world safe for autocracies by taking on America and the other democracies, weakening Washington’s alliances in Europe and Asia and overturning the primacy of liberal democratic norms in place since the end of the Cold War in the early 1990s.

In recent days, the Russian president requested military assistance from his Chinese counterpart to fight a war when much of...