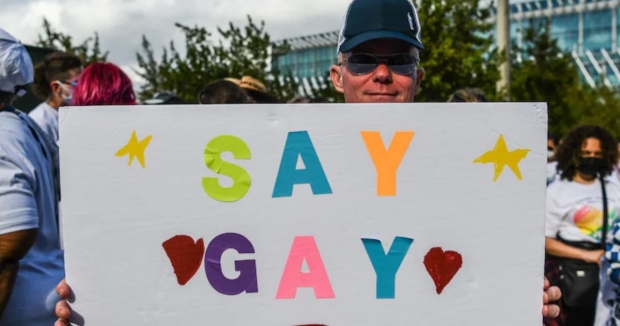 A demonstrator against the Parental Rights in Education bill in Florida on March 13. (Chandan Khanna/AFP/Getty Images)

A Florida bill that would restrict teaching about sexual orientation and gender identity in public schools for younger students is a hotly-debated issue in the state and nationwide. In the context of the ongoing “culture war” and constant debates about censorship, news coverage of it has been heavily biased.

Last week, Florida’s Senate passed the Parental Rights in Education bill, which would “prohibit classroom discussion about sexual orientation or gender identity” in kindergarten through third grade. It has been consistently framed as anti-LGBTQ+ by left-wing media outlets, and consistently defended by right-wing sources as protecting parents’ rights and combating “woke” teachers and activists. The left often call it the “Don’t Say Gay bill.” The right often argue that it doesn’t mention “gay” and is meant to protect students from explicit content.

Some balanced coverage of the bill does exist, but many reports about it reflect a clear bias one way or the other.

Some headlines about the bill were more balanced because they focused only on what the bill would do, rather than who it would purportedly satisfy or harm.

While still showing some signs of bias, these reports generally explained the thoughts and motivations of the bill’s supporters and opposition in a more balanced way than many other left- and right-rated sources did.

Liberal Media Bias in Coverage of the Bill

Many headlines and news reports from left-rated sources showed bias by calling the measure the “Don’t Say Gay bill” in their headlines, thus adopting the language of the bill’s staunch opponents.

After getting criticism from staff over donating to some of the bill’s sponsors and being accused of not taking an empathic stance on the legislation, Disney’s CEO said he opposed the bill, apologized to Disney staff about not acknowledging the bill sooner and cut off donations to Florida politicians. Some left-rated sources used that as an opportunity to highlight scrutiny of the bill.

At the heart of the media divide is likely a disagreement over who the bill protects or harms more. Many reports from left-rated sources and some center-rated sources focused solely on voices who said the bill would endanger LGBTQ+ rights and visibility while also raising concerns about unconstitutional censorship.

Conservative Media Bias in Coverage of the Bill

Many headlines from right-rated outlets instead focused on the Parental Rights in Education bill’s purported goal of protecting parents’ rights to be involved in what their children learn.

Some right-rated outlets highlighted poll data suggesting that people support the bill and that the bill is righteous. And similar to how the left framed the bill as anti-LGBTQ+, some on the right described it as “anti-grooming.”

While the left usually highlighted concerns about LGBTQ+ rights, reports from right-rated sources also often focused on voices who supported the bill and accused purportedly “woke” teachers and activists of trying to push LGBTQ+ identities and progressives ideologies on young children.

The Parental Rights in Education bill is not yet law, and is awaiting Gov. Ron DeSantis’s signature. There has not yet been a final decision on what age groups the restrictions would apply to.

In the meantime, use the AllSides balanced newsfeed and Balanced Search to guarantee yourself a diverse spread of coverage on this and any other story.