Walter Mondale, the former vice president under President Jimmy Carter, died Monday at the age of 93. He served as U.S. Senator from Minnesota from 1964 to 1976, and in 1984, he became the first presidential candidate to select a woman, Geraldine Ferraro, to be his running mate.

Mondale lost in a landslide defeat to President Ronald Reagan that year, but he remained a revered liberal elder with a list of accomplishments that are still relevant to many Democrats today. 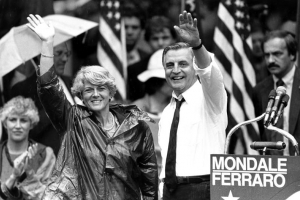 It was a sign of respect for a man many Americans remember largely for his near-shutout defeat for the White House in 1984. But well after his bruising loss, Mondale remained a revered liberal elder — with a list of accomplishments that are still relevant today....

Former Vice President Walter Mondale, who was also the Democratic nominee for president in 1984, died on Monday at the age of 93.

Kathy Tunheim, a spokesperson for the family, confirmed the former vice president’s death in an email to The Hill. Axios first reported the news of Mondale’s death.

According to Tunheim, Mondale died peacefully of natural causes at his home in downtown Minneapolis at 7:21 p.m. while surrounded by his immediate family.

Prior to serving as vice president during former President Carter’s single term in the White House,...

Walter Mondale, a Democratic vice president who was beaten by Ronald Reagan in a landslide presidential election in 1984, died at his home in Minneapolis on Monday. He was 93.

A statement from the Mondale family sharing news of Walter Mondale's death did not provide a specific cause.

Mondale was Jimmy Carter's running mate in 1976, beating Republican incumbent Gerald Ford and Bob Dole. Hamstrung by a weakened U.S. economy and energy crisis, Carter and Mondale lost reelection in 1980 to Reagan and George H.W. Bush. A U.S. senator for...