Lawmakers have failed to strike a bipartisan police reform deal after months of negotiations in the wake of the police killings of George Floyd, Breonna Taylor and others. In a statement Wednesday, President Joe Biden said he still hopes to pass a "comprehensive and meaningful police reform bill" and chastised Republicans for purportedly rejecting "modest reforms, which even the previous president had supported." Sen. Tim Scott (R-S.C.), a lead negotiator, said his Democratic "negotiating partners walked away from the table." A key point of disagreement was on reforming qualified immunity, which protects individual police officers from civil liability for misconduct. Democrats and Republicans seemed aligned on other details, including banning chokeholds, boosting funds for mental health resources and cutting off the transfer of military equipment to police. The future of bipartisan police reform legislation is now unclear.

Left-rated sources often framed Republican stubbornness as the reason for the talks failing; some highlighted how Democrats still plan to try to advance police reform legislation. Reports from right-rated outlets often painted Democrats as to blame for the failed negotiations, with some accusing them of an unwillingness to compromise. Others framed the "Defund the Police" movement as having hurt efforts to pass bipartisan legislation. 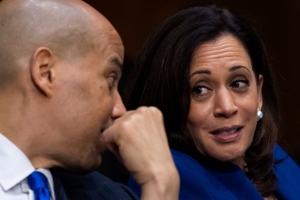 Biden released a statement Wednesday acknowledging that there is no longer a path forward for the George Floyd Justice in Policing Act, which had already passed through the House. Democratic New Jersey Sen. Cory Booker and Democratic California Rep. Karen Bass introduced the legislation earlier this year, but failed to garner enough Republican support in the Senate.

“The murder of George Floyd is... 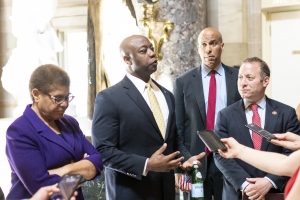 Police reform talks in Congress have fallen apart, as lawmakers could not strike a bipartisan deal despite the loudest calls in years to root out law enforcement violence against Black Americans.

“After months of exhausting every possible pathway to a bipartisan deal, it remains out of reach right now, even after working collaboratively with and securing the support of policing groups like the Fraternal Order of Police and International Association of Chiefs of Police for our proposals,” Sen. Cory Booker, a New Jersey Democrat who joined in reform talks for...

Read full story
Some content from this outlet may be limited or behind a paywall.
See full media bias rating for CNBC
From the Left
3852
Criminal Justice
Sweeping George Floyd police reform bill stalls as talks collapse
The Guardian 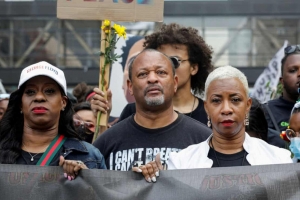 Bipartisan negotiations in the US Congress over a police reform bill that was prompted by the killing of George Floyd have collapsed.

“We did the best we could,” the Democratic congresswoman Karen Bass told reporters on Wednesday.

The House passed the George Floyd Justice in Policing Act in March, and Bass and the Democratic senator Cory Booker have since been working with the Republican senator Tim Scott to try to reach a bipartisan agreement on a bill that could pass the Senate.

But the talks dragged on for months with negotiators remaining at odds over...

A Union Scandal Landed Hundreds of NYPD Officers on a Secret Watchlist. That Hasn’t Stopped Some...

One judge said she believed the testimony of a Bronx defendant’s 64-year-old mother more than that of the two New York City police officers who arrested him...

A Black 10-Year-Old Drew an ‘Offensive Sketch.’ She Was Handcuffed by Cops.
ANALYSIS

Honolulu cops allegedly handcuffed and detained a 10-year-old Black girl with disabilities after she was accused of drawing an “offensive sketch of a student”...

He Calls Himself the ‘American Sheriff.’ Whose Law Is He Following?
ANALYSIS

The first thing to know about Mark Lamb, the sheriff of Pinal County, Arizona, is that he just plain looks like a sheriff. It could be the Justin...

A whistleblower identifying as a former high-ranking US Capitol Police official excoriated the department's leadership before, during and after the deadly...

Do police belong in America's schools?

An 18-year-old woman in Long Beach, Calif., who was shot in the head by a school safety officer earlier this week, was taken off life support on...

Guantanamo: A former prosecutor’s solution to an ‘unsolvable problem’

There’s no simple way to close Guantanamo Bay. According to one former prosecutor, political courage may be the key to justice in this case. When Omar...

As activists mobilized this summer to ask Minneapolis voters to replace their police department, one of the first prominent Democrats to slam the plan was a...

At police lines, not all journalists are created equal
OPINION

For a lot of journalism’s history, BIPOC experiences have been told through a white lens. Even when photojournalists and writers have come from diverse...

Attorney Andrew Branca of Law of Self Defense weighed in Friday on the Alec Baldwin on-set shooting incident that left one dead, cinematographer...

Walgreens announced Tuesday the closure of five more stores in San Francisco due to the surge of shoplifting that has plagued the city, Fox Business reported...