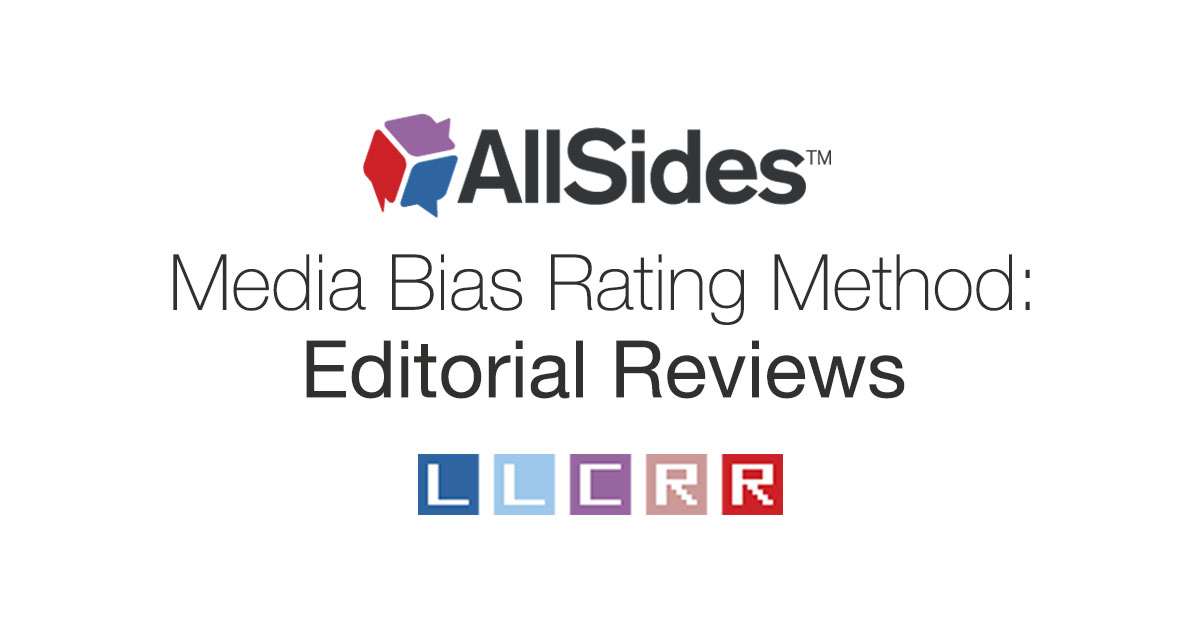 During an AllSides Editorial Review, a multipartisan panel of six or more people across the political spectrum, with equal representation of people from the left, center, and right, review news reporting from a source, look for indicators of media bias, and come to a general consensus on the source's bias. Our panelists are trained to spot common types of media bias.

The purpose of the AllSides Editorial Review is to determine media bias as it reflects the subjective judgements of people across the political spectrum. The overarching question that an AllSides Editorial Review of a media outlet seeks to answer is: Taking into account the numerous ways that a media outlet can display preferences, biases, and perspectives, what is the overall political bias of this outlet? Overall, would someone reading this outlet generally receive a Left, Lean Left, Center, Lean Right, or Right perspective?

AllSides rates content only — we do not determine media bias ratings by taking into account who owns or funds the media outlet or what agenda we believe its owners or editors may have. This can be important information and is included on our source pages, but our ratings reflect the bias of content only.

AllSides Editorial Reviews are conducted by a multipartisan panel. Each panelist has self-rated their bias using our bias rating quiz. A group of six panelists or more, with equal representation of people from the left, center, and right, gathers and reviews the works of a media outlet, looking for indicators of media bias. (For Small Group Editorial Reviews, we use a smaller panel of three people representing the left, center and right).

The panel reviews multiple elements, with special attention given to the media outlet’s homepage, politics section, most recent articles, photos, story placement and story choice, word choice, and homepage screenshots and content dating as far back as six months using online archival tools like the Wayback Machine. In the weeks or days leading up to the formal review, members of the panel may periodically review the works of the outlet on their own time.

The bias categories for Editorial Reviews are defined as follows:

AllSides Editorial Review panelists review the graphic shown above when making their subjective determination as to where the outlet’s bias falls on this numerical scale.

Editorial Reviews are just one methodology AllSides applies to media outlets. To determine a final AllSides Media Bias Rating, AllSides considers the results of all methodologies that have been applied to that outlet — Editorial Reviews, Blind Bias Survey data, community feedback, and third party data from academics and other groups.

During the Final Determination stage of rating a media outlet, we also determine our confidence level in the rating (initial, low, medium, or high) by considering how much data we have on the outlet and how consistent it is. Final Determinations are ultimately subjective, and are rarely needed to be done formally, as the results of our various methodologies usually match.

The AllSides Editorial Review panel is trained to understand and consider common types of media bias outlined in our resource guide. Some of the types of bias we take into consideration during Editorial Reviews are as follows:

On our source pages, AllSides provides readers with additional information about media outlets, such as who owns the company, the owner's political leanings, and the political leanings of its audience. We offer this information in the interest of transparency, but our Editorial Reviews only evaluate the content of the outlet, not its history or the partisan leanings of its ownership, staff or audience. We do not give a rating based on the fact that more liberals or conservatives read that outlet, or that it is owned by a liberal or a conservative, or that it is funded by someone thought to be liberal or conservative; we assess content only. Editorial Reviews seek to answer the question of what bias or perspective someone might receive simply from reading the outlet without necessarily knowing its history, ownership, audience, or funding.

AllSides does not use a formalized grading rubric to assess media bias, as we believe rubrics can introduce unintended bias themselves as well as fail to capture subjective elements adequately.

The Limits of the AllSides Editorial Review

As with all consensus-making processes, there may be someone on the panel who disagrees with the majority decision. The majority of the team may agree that a media outlet is Lean Left, while one team member firmly believes it deserves a Left rating. Or perhaps the team has a difficult time deciding if the outlet is Lean Left or Center, as the content appears on the border. These are subjective judgments, and no one is necessarily right or wrong. AllSides is transparent and provides details about these nuances and disagreements on the source page for each outlet.

There is no “accurate” measure of media bias. Bias is in the eye of the beholder and ultimately subjective. This is why, whenever possible, AllSides uses multiple methodologies to rate bias.

Unless otherwise noted, AllSides Media Bias Ratings™ are based on online content only, not broadcast, TV, video, or radio content. People who view AllSides Media Bias Ratings™ hoping to understand the bias of NPR radio news, for example, will find AllSides provides ratings for NPR’s online, written content only. This is an important distinction, as the bias of an outlet’s radio, TV, or broadcast content may differ significantly from its online content.

In addition, some perspectives and beliefs may be missing from the group of people who make up the panel. While we may have a Democrat on the Editorial Review team, perhaps they are a moderate rather than a progressive Democrat. Perhaps we have a centrist or a traditionalist conservative on the team, but not an explicit libertarian. Our Editorial Review team cannot feasibly include people from every single political category, as there are so many different ideologies; political thought is complex and has endless variation. This is part of why AllSides solicits community feedback on our bias ratings from our audience, which includes a nearly even split of people who consider themselves left, center, and right, and encompasses various ideologies. Community feedback does not determine our ratings, but acts as a signal that a bias rating may be off and trigger more research and review.

If the overall bias of a source’s editorial/opinion content differs significantly from the bias of its news section, we often provide a separate media bias rating for the opinion page. We also rate a number of individual commentators/opinion writers individually.

The opinion/editorial page media bias rating takes into account both the overall bias of the source’s editorial board and the paper’s individual opinion page writers. The editorial board’s bias is weighted, and affects the bias rating by roughly 60%. For example, The New York Times has a range of individual opinion writers, who have a range of biases. Meanwhile, The New York Times Editorial Board has a Left bias as of the time of this writing. Taking all of this into account, overall, we give the New York Times Opinion Page a Left media bias, even though some conservative writers may be present. This rating includes both the overall biases of the individual writers and the Editorial Board, but weights the Editorial Board.

AllSides Video Editorial Reviews are designed to be multi-partisan in the same way as Written Editorial Reviews, with each person self-rating their bias using our bias rating quiz. A group of six people or more from across the political spectrum gathers and watches a media outlet’s broadcast content. For Small Group Editorial Reviews, we use a group of three people representing the left, center and right. We then follow the same process as an Editorial Review of written content.

Like with our analysis of written content reviews, our participants are trained to understand and consider the types of media bias outlined in our guide. We look for things such as sensationalism, editorialization, the inclusion of subjective adjectives and qualifiers, story choice, and other elements.

For Video Editorial Reviews, we only evaluate the content of the outlet, not its history or the partisan leanings of its ownership or audience. AllSides Video Editorial Reviews seek to answer the question of what bias or perspective someone might receive simply from watching the outlet, not necessarily knowing its history, ownership, audience, or funding.

Some grading systems and rubrics can be unreliable. While rubrics can be helpful, they generally assign weights to different attributes, and predefined weights introduce bias of their own and undervalue less tangible attributes.

For example, suppose a media outlet published a story and used no photo, or a very standard stock photo that didn’t show bias, and coupled it with an extremely sensationalist or biased headline. In a numerical rating system in which bias is rated from 0 to 10 with 10 being the most biased, the photo may be rated “0” on the bias scale, and the headline perhaps an “8.” The average of these ratings is 4, indicating the piece has moderate bias. However, most people would agree the sensationalist headline significantly overrules a neutral photo.

Due to the limitations of rubrics, our approach assesses the overall impact of all elements of a story, taken together, and reflects the bias and imprecise nature of those things. With so many elements to consider — word choice, story choice, sensationalism, bias by omission, etc. — we find it is better to use the subjective judgement of Americans rather than a rigid system that may turn up ratings that do not reflect how a human being might perceive the article or media outlet.

Bias is subjective and contextual. Understanding what other media outlets are covering at the same time, and how, allows us to be cognizant of the full landscape. We can see what any given media outlet is covering, omitting, highlighting, or how they are framing an issue. We review news from other sources to get a sense of the entire media landscape, so that we can more easily identify bias in a broad context.