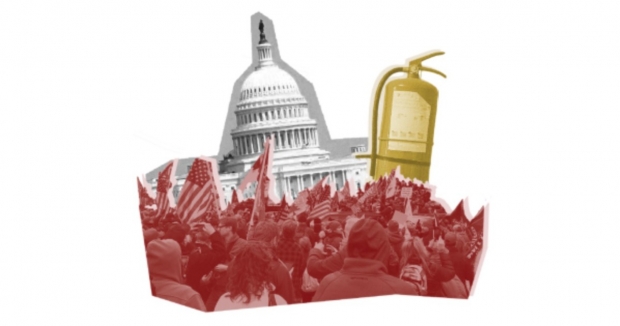 Illustration by Joseph Ratliff; Images from JumpStory and Wikimedia Commons

This is the third installment of our series on 2021’s Major Facts and Media Myths.

The claim that a pro-Trump mob murdered a Capitol Police officer on Jan. 6 is false, and was based on vague and conflicting statements from law enforcement and questionable reporting from major news sources, which largely stemmed from a New York Times (Lean Left bias) report.

When Capitol Police Officer Brian Sicknick, 42, collapsed and died the day after responding to the riot, rumors that the mob beat him to death received so much attention that the Justice Department, FBI and Washington police opened homicide investigations. But no evidence that Sicknick was beaten ever emerged.

Still, running off premature reporting and inconsistent statements from officials, some media outlets, such as MSNBC (Left) and CNN (Left), continually reported that rioters bludgeoned Officer Sicknick to death with a fire extinguisher. Despite the lack of evidence, the claim showed up in Trump’s impeachment proceedings and the House’s Jan. 6 committee hearings, and was repeated by President Joe Biden months later.

Let’s break down the media coverage and dominant opinions around the theory, and highlight the main facts and myths to be aware of.

Sicknick died from injuries that he sustained while being beaten by the pro-Trump mob that stormed the U.S. Capitol building on January 6. People used a fire extinguisher and pepper or bear spray to assault Sicknick.

What the Medical Examiner Said

In mid-April, Washington D.C. chief medical examiner Francisco Diaz announced that Sicknick died at roughly 9:30 p.m. on Jan. 7 of natural causes associated with two strokes. His official cause of death is listed as "acute brainstem and cerebellar infarcts due to acute basilar artery thrombosis."

Diaz didn't note any evidence that Sicknick had an allergic reaction to chemical spray, or that he was suffering from internal or external injuries of any kind. He didn’t comment on whether Sicknick had any pre-existing conditions, in the interest of privacy. Diaz added that “all that transpired” on Jan. 6 “played a role in [Sicknick’s] condition.”

The examiner’s report was highly anticipated and was followed by a wave of coverage that differed drastically from earlier coverage. Meanwhile, few corrections were made to previous stories that the report contradicted.

What Law Enforcement Have Said

Capitol Police at first said Sicknick died from injuries sustained “while on-duty” and “while physically engaging with protesters.” A day later, acting Attorney General Jeffrey Rosen said Sicknick succumbed to injuries "he suffered defending the U.S. Capitol, against the violent mob who stormed it on Jan 6."

Two men — Julian Elie Khater, 32, of State College, Pa., and George Pierre Tanios, 39, of Morgantown, W.Va. — were arrested in March and charged with assault with a dangerous weapon, conspiring to injure officers and assaulting federal officers, including Sicknick. Prosecutors claimed the pair sprayed Sicknick with chemicals. There is video appearing to show Sicknick reacting after being sprayed, but there is no evidence that the chemicals contributed to his death.

What The Left and Center Have Said

The narrative that Sicknick was beaten to death went viral when the New York Times published an anonymously-sourced story on Jan. 8 under the headline: “He Dreamed of Being a Police Officer, Then He Was Killed by a Pro-Trump Mob.”

House Democrats cited the New York Times report in their Feb. 2 trial memorandum to advance their attempt to impeach Trump. As recently as June, President Joe Biden repeated the claim that the Jan. 6 mob “killed a police officer” — a falsehood that very few mainstream fact-checkers addressed.

On Feb 12, the New York Times added a brief note to the top of this story, describing “new information” that “questions” the details originally provided to the Times. To date, no other sources have confirmed the original account published by the Times on Jan. 8.

ProPublica (Lean Left bias) published a much less viral story on Jan. 8, the same day as the Times story, that suggested a different course of events. It included interviews with Sicknick’s family, who said he “texted them Wednesday night to say that while he had been pepper-sprayed, he was in good spirits.”

But the New York Times story about the fire extinguisher and life support took off. Within a day, left-rated media widely reported that federal prosecutors were opening a murder investigation into Sicknick’s death.

Reuters (Center bias) published an interview with Sicknick’s father on Jan. 9, in which he said his son “was pepper-sprayed and hit in the head,” and that “ambulance crews resuscitated him twice as he was rushed to a nearby Washington hospital” before he died the next day. The interview was quickly picked up widely by outlets on both the left and right — neither of which questioned the account.

In the following weeks, prosecutors struggled to build a homicide case against those accused of killing Sicknick. Slowly, the media made quiet and limited updates to their original coverage. Some made no corrections at all.

On Feb. 2, CNN (Left bias) reported on how investigators were unable to build a murder case in Sicknick’s death, and said due to a lack of evidence of blunt force trauma, some investigators “believe early reports that he was fatally struck by a fire extinguisher are not true.”

When the medical examiner’s report was released in April, many sources on the left and center, such as NPR (Center bias) and the Washington Post (Lean Left bias), highlighted how the results would “make it difficult for prosecutors to pursue homicide charges.”

Despite a lack of evidence for the beating, tweets from the Times, the Associated Press (Center bias) and others that say Sicknick was hit with a fire extinguisher and include other false details remain unaddressed. Unlike misleading posts about COVID-19 or the 2020 election, these posts about Sicknick are not accompanied by third-party fact-checking when viewed on the platform, despite Twitter’s policy of adding fact-checking labels to top stories. (AP and Reuters collaborate with Twitter on this feature.)

Many reports from left and center that describe Sicknick’s death as the result of injuries from clashing with protesters, such as the NYT story and one from Reuters (Center bias), remain uncorrected and viewable online.

The situation’s factual evolution hasn’t done much to correct the narrative on the left that the pro-Trump mob murdered a cop on Jan. 6, which subsequently fueled Democratic politicians’ criticisms of former President Donald Trump.

Not all on the left and center were convinced, however. On Feb. 16, when writing about the “false and exaggerated claims still being spread about the Capitol riot,” journalist Glenn Greenwald (Center bias) said the fire extinguisher claim “was false in all respects” and accused the New York Times and others of rushing to blame Trump supporters for deliberate violence.

What The Right Has Said

At first, many major right-rated outlets published stories echoing the New York Times’ fire extinguisher claims without skepticism. Like the left’s early coverage, almost none of it has been corrected.

Others on the right argued that the fire extinguisher story was questionable or false within a month of Sicknick’s death. All right-rated media eventually shifted to debunking the story and criticizing Democrats and other news sources for advancing it without evidence.

On Jan. 8, National Review (Right bias) reported that Sicknick died “after he was reportedly hit in the head with a fire extinguisher.”

On Jan. 29, the Daily Caller (Right bias) said Sicknick “was hit in the head with a fire extinguisher during the breaching of the Capitol on Jan.6” and attributed that account to CNN.

Fox News (Right bias) reported on Feb. 7 that Sicknick was “struck in the head by a fire extinguisher” by rioters and died from his injuries. Strangely, the outlet also reported a day earlier on Feb. 6 that “media reports” about Sicknick’s death “have been conflicting.” A month later, the outlet again described conflicting accounts of Sicknick’s death, though its Feb. 7 article remains uncorrected.

By April, Fox News was covering the right’s criticisms of left-rated media coverage of the story.

The New York Post (Lean Right bias) published frequent updates on the Sicknick story in the weeks following his death, all of which repeated the fire extinguisher claim without skepticism, and none of which have been updated. It also published a video on Jan. 11 appearing to show a rioter throwing a fire extinguisher and striking a police officer in the helmet.

Even in its March 24 report about Sicknick being pepper-sprayed, the Post described without citing evidence how “at some point, [he] was also struck in the head with a fire extinguisher.”

Other right-rated voices and media critics were much more skeptical early on.

A Feb. 9 article from Revolver News (Right bias) painted the fire extinguisher narrative as blatantly false and suggested that a conspiracy between Democrats and the media sought to manufacture the story.

On Feb. 11, National Review writer Andrew McCarthy (Right bias) published an article examining the lack of evidence for the fire extinguisher story and explaining the conflicting reports about the death, what Sicknick’s family was told, where Sicknick went after the riot, and so on. The writer criticized House Democrats for using the story in their impeachment proceedings without evidence and in spite of contradictory details.

This narrative quickly took hold among most right-rated news sources. Many soon accused major left-rated media outlets like the New York Times and CNN of misleading the public about Sicknick’s death and ignoring the medical examiner’s report. Few, however, addressed their own erroneous coverage.

Others, such as the liberatarian Reason Magazine (Lean Right bias), also accosted law enforcement for a lack of transparency about Sicknick’s death, and blamed that vagueness for distorting the media narrative. Reason reporter C.J. Ciarmella argued that “placing the blame squarely on the media ignores law enforcement's long history of laundering misinformation when it suits its purposes.”

Is It True or False?

There is no evidence that the people who stormed the U.S. Capitol on January 6 beat a police officer to death.

Officer Sicknick collapsed in his office around 10:00 p.m. on Jan 6. after returning from the Capitol. Washington D.C.'s chief medical examiner determined that he died of natural causes in the hospital the following night. The examiner said that the riot played a role in Sicknick’s condition, but his autopsy found no evidence of trauma or an allergic reaction.

There is no evidence that Sicknick was ever bleeding or struck with a fire extinguisher, as the New York Times originally reported.

There are videos of Sicknick walking away after protesters breached a barrier and appearing to bend over after apparently being sprayed with the chemicals around 2:00 p.m. on Jan. 6. The videos were shown by the Justice Department in the trials of Khater and Tanios. The former remains in pretrial detention; the latter was released on bond.

The narrative that rioters beat a cop to death on Jan. 6 was born out of premature law enforcement statements and irresponsible media coverage. We at AllSides believe this example speaks to the need for patience and balance in journalism, especially when covering political violence and death.