One woman is dead after being shot Wednesday at the U.S. Capitol building in Washington, D.C., which is now secure after being breached by hundreds of Trump supporters. People clashed with police and entered the building seeking to disrupt Congress during Wednesday's electoral vote tally, which was adjourned before likely moving to confirm President-elect Joe Biden's victory. Lawmakers and Vice President Mike Pence were evacuated and moved to an undisclosed location, along with the soon-to-be-counted physical votes. President Donald Trump, who held a rally making unproven claims of decisive voter fraud in D.C. Wednesday morning, tweeted a request for supporters to remain peaceful and avoid violence amid the chaos. Biden also addressed the nation, saying the events represented an assault on democracy and casting blame on Trump. House Speaker Nancy Pelosi's office released a statement saying lawmakers will continue the tally Wednesday night.

The news received major coverage from across the political spectrum. Some coverage from the right tended to focus on Trump's calls for his supporters to be peaceful. Many voices from the left tended to focus on Trump's encouragement of protests in the weeks leading up to Jan. 6 as well as his ongoing election challenges, and framed the protests as a "coup" and as Trump's "legacy." Updated 1/6/21 at 6:55 p.m. ET

From the Left
308
Elections
US Capitol secured, woman dead after rioters stormed the halls of Congress to block Biden's win
CNN (Online News) 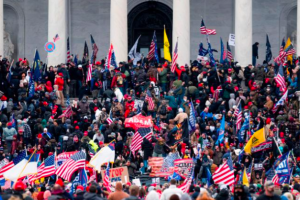 The US Capitol is once again secured but a woman is dead after supporters of President Donald Trump breached one of the most iconic American buildings, engulfing the nation's capital in chaos after Trump urged his supporters to fight against the ceremonial counting of the electoral votes that will confirm President-elect Joe Biden's win.

Shortly after 1 p.m. ET Wednesday hundreds of pro-Trump protesters pushed through barriers set up along the perimeter of the Capitol, where they tussled with officers in full riot gear, some calling the officers "traitors" for...

House Speaker Nancy Pelosi said on Wednesday that lawmakers would resume the count of electoral votes to confirm the November election result once the U.S. Capitol is cleared after pro-Trump rioters breached the building.

She said that decision was made after consultations with fellow congressional leaders and calls to the Pentagon, Justice Department and Vice President Mike Pence.

The female protester shot inside the Capitol on Wednesday has died.

Sources said the woman succumbed to her injuries.

Law enforcement sources told The Post that the woman was apparently shot by Capitol Police.

Battleground states ask: Is voting in America too easy – or too hard?

The right to vote is central to democracy, though not easy to implement. Yet behind it stands an idea worth fighting for – that each individual matters. How...