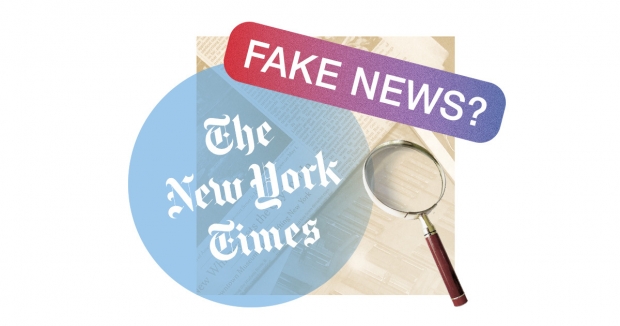 What constitutes propaganda, fake news, or misinformation is a point of major disagreement among the left and right. But many major media sources have at times advanced fake news in the form of false, unconfirmed or misleading stories, and we can usually tie those errors to their media bias.

Media outlets that favor the political left or right may repeat claims or stories that suit their worldview and agenda, even if those stories turn out to be unfair, misleading or false.

There is broad disagreement as to what ought to be referred to as “fake news” in general.

Today, many left-leaning mainstream media outlets, including CNN, MSNBC, and The New York Times, have begun to more often refer to “misinformation” — fictional, made-up information or false narratives. In the past, when outlets on the left referred to “fake news,” it was largely in reference to purely false or made up information.

Related: What is Fake News?

However, media outlets and people on the right, as well as some on the progressive left, have been known to use a broader definition of “fake news” to describe media coverage that may include some factual information but is overly biased, deceptive, or manipulative. They believe that established media powers are employing bias, misrepresenting facts, failing to do good-faith research, focusing on the wrong things, pushing false narratives, and/or lacking credibility — all amounting to “fake news.” For those using this definition, they may see the New York Times as fake news.

Meanwhile, people from all sides of the political spectrum — left and right —have noted that the term “fake news” can be used to discredit anyone or anything someone disagrees with or doesn’t like.

An entire news outlet isn’t “fake news” because it posted one incorrect or false story. Mistakes do happen. Often, good journalists who make a mistake or accidentally publish false information issue apologies and corrections, and try to rectify the situation.

However, there are some examples of the New York Times publishing what some may say amounts to “fake news.”

The narrative that Capitol Police Offier Brian Sicknick was beaten to death went viral when the New York Times published an anonymously-sourced story on Jan. 8, 2021 under the headline: “He Dreamed of Being a Police Officer, Then He Was Killed by a Pro-Trump Mob.”

Besides the Times’s anonymously-sourced story, no other details supporting this account emerged. And as prosecutors struggled to build a homicide case against those accused of killing Sicknick, the New York Times made limited updates to its original coverage. On Feb. 12, the Times added a brief note to the top of its original story, describing “new information” that “questions” the details originally provided. To date, no other sources have confirmed the original account published by the Times on Jan. 8.

RELATED: Facts vs Myths: Did a Pro-Trump Mob Beat a Cop to Death?

The Times’s article currently states that "Medical experts have said [Sicknick] did not die of blunt force trauma, according to one law enforcement official. Instead, investigators increasingly believe that a factor may have been an irritant such as mace or bear spray that was sprayed in the face of Mr. Sicknick, the law enforcement official said."

In mid-April 2021, Washington D.C. chief medical examiner Francisco Diaz announced that Sicknick died at roughly 9:30 p.m. on Jan. 7 of natural causes associated with two strokes. His official cause of death is listed as "acute brainstem and cerebellar infarcts due to acute basilar artery thrombosis."

Despite the examiner’s conclusion and a lack of evidence for the beating, tweets from the Times saying that Sicknick was hit with a fire extinguisher remain unaddressed.

House Democrats cited the New York Times report in their Feb. 2 trial memorandum to advance their attempt to impeach Trump. As recently as June 2021, President Joe Biden repeated the claim that the Jan. 6 mob “killed a police officer” — an unsubstantiated claim that very few mainstream fact-checkers addressed. This is a clear example of a major news outlet spawning an unfounded claim that evolved into political misinformation.

Related: Did The New York Times Spread Disinformation About a Capitol Officer’s Death?

A June 2020 opinion piece from Sen. Tom Cotton (R-Ark.) in The New York Times, titled “Send in the Troops,” drew criticism from people on the left and some within the Times’ newsroom over purported misinformation.

In the article, Cotton argued for the military to crack down on protests and riots stemming from the murder of George Floyd. Cotton wrote that members of Antifa, a far-left antifacist movement, was "infiltrating protest marches to exploit Floyd's death for their own anarchic purposes."

Some Times staffers said that claim had been debunked and shouldn’t have been published, as did other left-rated media outlets such as the Washington Post (Lean Left bias).

Many voices on the right, such as the New York Post’s Editorial Board (Right bias), maintain that members of Antifa contributed to violent crimes during riots in the summer of 2020.

The Times’s opinion section added a lengthy note atop Cotton’s column explaining how “the essay fell short of our standards and should not have been published,” and how the Times had “failed to offer appropriate additional context — either in the text or the presentation — that could have helped readers place Senator Cotton’s views within a larger framework of debate.”

A March 2021 article from the New York Times, titled “For Political Cartoonists, the Irony Was That Facebook Didn’t Recognize Irony,” referred to The Babylon Bee as a "far-right misinformation site.”

After Dillon’s threat, the Times amended the article, removed the descriptor and published a clarification about the labeling dispute between Snopes and The Babylon Bee. Snopes (Lean Left bias), a fact-checking website, has on several occasions “fact-checked” satirical content from the Babylon Bee.

The Times’s amendment to the article reads: "An earlier version of this article referred imprecisely to the Babylon Bee, a right-leaning satirical website, and a controversy regarding the handling of its content by Facebook and the fact-checking site Snopes. While both Facebook and Snopes previously have classified some Babylon Bee articles as misinformation, rather than satire, they have dropped those claims, and the Babylon Bee denies that it has trafficked in misinformation."

What Does Fake News Mean to You?

So, is the New York Times “fake news”?

There are cases of the Times publishing examples of false or unproven claims, but the vast majority of its content is based in fact. Still, only a few instances of false information are enough to qualify the New York Times and others as “fake news” for some people.

In our polarized democracy, people have very different opinions about what constitutes fake news. AllSides rates media bias and has developed the AllSides Media Bias Chart™ to help you easily identify different perspectives, compare coverage, and find the truth.

See more on fake news and fact-checking from AllSides.