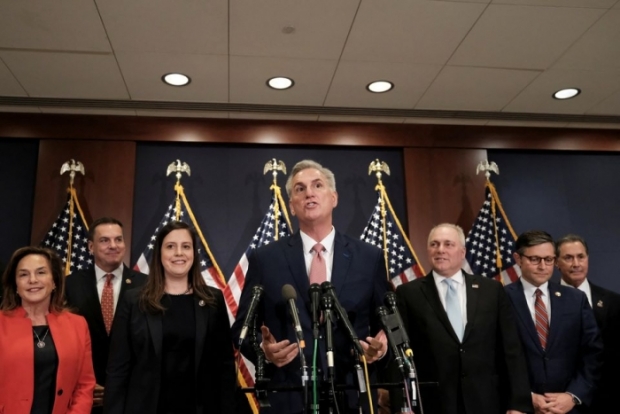 Democrats beat expectations in the 2022 midterm elections, but Republicans still took back the House of Representatives.

As of Thursday, Democrats hold 50 Senate seats to Republicans' 49, with the final seat to be filled after Georgia's runoff next month. Either way, Democrats hold the tie-breaking vote in Vice President Kamala Harris. Wins for Democratic incumbents in Arizona and Nevada proved pivotal.

Meanwhile, Republicans secured a majority in the House, though it's much slimmer than many expected. While the party underperformed compared to predictions, key wins in California and New York, and some help from redistricting, gave Republicans a decisive edge.

Congress returned for a "lame duck" session this week, in which some lawmakers who lost reelection bids will be casting their final votes before leaving office. One of the first actions was a bipartisan group of Senate negotiators saying they reached a deal to codify same-sex marriage.

The struggles for power within the Republican Party, such as between former President Donald Trump and Florida Gov. Ron DeSantis, or between Senate Minority Leader Mitch McConnell and Sen. Rick Scott, have been a primary focus of post-2022 elections coverage across the political spectrum. Hours after Scott announced that he'd challenge McConnell for his Senate leadership role, McConnell bested him in a 37-10 vote from other GOP lawmakers.

The fact that a Democrat-controlled Senate will likely approve lots of Biden judicial nominees, and that the GOP-controlled House will likely investigate Hunter Biden and work to limit spending as a way to combat inflation, were also frequent themes in coverage across the spectrum. Voices on all sides continue to focus on Trump's role in Republicans' 2022 underperformance, and many writers on both left and right voiced opposition to his announcement of his 2024 campaign.

See more of our 2022 elections coverage:

"The victory gives Republicans the power to rein in Biden's agenda, as well as to launch potentially politically damaging probes of his administration and family, though it falls far short of the 'red wave' the party had hoped for."

What Keeping the Senate Means for Joe Biden's Presidency

"Although the Georgia runoff next month is no longer crucial for Democrats to control the Senate, expanding Democrats' majority to 51-49 would give the party an additional edge in passing the few bills that are able to advance with a simple majority. Senate Democrats can also reject bills passed by a GOP-controlled House and set their own legislative agenda."

"The Senate win for Democrats also has other benefits for the Biden administration for the next two years. The party will be able to confirm the president's judicial nominees as well as vote against bills passed by a likely Republican House and uphold Biden's legislative agenda."

Biden doesn’t get it; America voted against him on Election Day

"Mr. Biden lost the House — and make no mistake, it was Mr. Biden who lost the House. Why? Because Americans are fed up with soaring inflation, skyrocketing food and gas prices, out-of-control crime, and the ongoing crisis at the southern border. Now, Republicans didn’t pull off the massive margin predicted by pollsters (how do these guys get it so wrong every time?!). But they will take over the House and slam the brakes on the president’s runaway spending train."

"Even though the Republican majority is poised to be much thinner than expected – with a likely margin of just a couple seats – all indications are that House Republicans are poised to push ahead with a wide-ranging set of investigations into all corners of the Biden administration, including the messy US withdrawal from Afghanistan, Covid-19 vaccine mandates and the Justice Department’s handling of the various investigations related to Donald Trump."

What Senate Democrats can do alongside a House GOP majority

"There is effectively no overlap in the parties’ priorities, and the odds of bipartisan compromises on major issues are non-existent. Those hoping for constructive policymaking in the next Congress should probably start preparing themselves for a far more frustrating two-year period."

Story Of The Week, 2022 Elections, US House, US Senate, Politics, US Congress