Senate Minority Leader Mitch McConnell (R-Ky.) was reelected to that position by his peers on Wednesday, just hours after Sen. Rick Scott (R-FL) announced a bid to challenge McConnell for Senate Republican leadership.

Key Quotes: “I believe it’s time for the Senate Republican Conference to be far more bold and resolute than we have been in the past. We must start saying what we are for, not just what we are against,” Scott wrote when announcing his challenge. At the time, McConnell told reporters, "I have the votes. I will be elected. The only issue is whether it will be sooner or later".

For Context: McConnell faced criticism after Republican underperformance in the midterm elections, with some Republican senators blaming McConnell's comments last August about the "quality" of Republican candidates. That pushback wasn't enough to sway support for him in the chamber, as he defeated Scott 37-10 in the Wednesday vote. After being reelected, McConnell is on track to be the longest serving party leader in Senate history.

How the Media Covered it: Sources across the political spectrum covered the leadership challenge, and the arguments for supporting or opposing both McConnell and Scott. Updated 11/16/22 at 1:32 p.m. ET with news of McConnell's reelection. 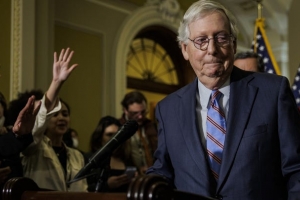 Senate Minority Leader Mitch McConnell on Wednesday won reelection as Senate GOP leader, fending off a challenge from Sen. Rick Scott and setting himself up to become the longest-serving party leader in the history of the Senate.

Several senators had called for the election to be postponed. Sen. Ted Cruz, R-Texas, said Tuesday he would offer a motion in the Republicans' Wednesday meeting to delay it until after the Georgia runoff.

But the effort failed and McConnell, R-Ky., beat Scott, R-Fla., and maintain his firm grip on GOP power in the Senate. With... 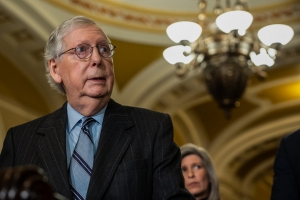 Scott (R-Fla.) launched the long-shot bid on Tuesday, determined to challenge the “status quo” under McConnell after the GOP failed to take control of the Senate. McConnell is now on track to be the longest serving party leader in the chamber’s history.

McConnell prevailed over Scott in a 37-10 vote.

Some Senate Republicans had pushed for delaying the leadership elections, but that vote failed,...

A majority of GOP senators voted to elect McConnell leader after a motion backed by Sen. Ted Cruz (R-Texas) and other conservatives to delay the leadership election until after the Dec. 6 Georgia runoff failed.

Scott’s last-minute challenge to McConnell represented the toughest competition the senior Republican senator has faced for the top leadership...