Amid Feud With DeSantis, Many Republicans Turn on Trump

Many conservative politicians and media figures were quick to blame former President Donald Trump after voters refused to give Republicans their expected “red wave” on Election Day.

For Context: With record inflation and favorable poll numbers, Republicans expected to perform better than they did. However, many Trump-backed candidates failed to meet these expectations. Trump has also been feuding with Florida Gov. Ron DeSantis, whom he labeled “DeSanctimonious” at a recent event. DeSantis won reelection over challenger Charlie Crist (D) by nearly 20 percentage points on Tuesday. By comparison, Trump won Florida by about 3 points in 2020.

What the Left said: Voices from the left generally passively agreed with the right’s conclusions about Trump’s impact — but didn’t like DeSantis either. An MSNBC (Left bias) columnist said DeSantis’ “rise is because of his authoritarian sympathies and attitudes, not in spite of them.”

With Trump The Big Loser In ’22 Midterms, DeSantis Now Frontrunner For ’24
Joseph Curl 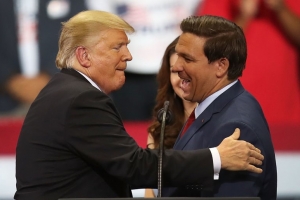 He wasn’t even on the ballot, but former President Donald Trump was the big loser on Election Day 2022.

A plethora of pre-Election Day polls showed Republicans with a healthy lead, and pollsters went so far as to predict a ‘red tsunami.’ Instead, it was more like a pink trickle.

“Definitely not a Republican wave, that’s for darn sure,” Sen. Lindsey Graham (R-SC) said as the results came in Tuesday.

With ballots nationwide still being counted, the GOP held a small lead in the House — although polls had shown... 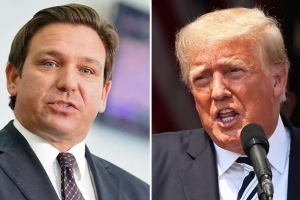 DeSantis’s odds in the 2024 presidential race jumped to 28 percent on Wednesday, while Trump’s dropped to 18.4 percent, according to Election Betting Odds, a tracking website run by conservative pundit John Stossel and his executive producer Maxim Lott that looked at the odds offered by multiple other forums.

Taking aim at DeSantis, Trump goes further than he should have
Steve Benen

The New York Times published an article that quickly made the rounds among political insiders, especially in the Republican Party. Its lede was straightforward:

For months, former President Donald J. Trump has been grumbling quietly to friends and visitors to his Palm Beach mansion about a rival Republican power center in another Florida mansion, some 400 miles to the north. Gov. Ron DeSantis, a man Mr. Trump believes he put on the map, has been acting far less like an acolyte and more like a future competitor, Mr. Trump complains. With his...