Where Does Biden Stand on Abortion?

President Joe Biden's stance on abortion has evolved over time.

Speaking to reporters Tuesday, Biden said "basic fairness and the stability of our law demand" that Roe v. Wade be preserved. He called abortion protections "a fundamental right" and pledged to "work to pass and sign into law" legislation codifying Roe v. Wade, while also saying he's "not prepared" to judge whether the Senate should remove the filibuster to do that.

In the past, Biden's stance on abortion rights has been inconsistent. In 1981 as a senator, he voted for a constitutional amendment to allow states to overturn Roe. He then opposed it when it came up again for vote in 1982. Biden was also a longtime supporter of the Hyde Amendment, which banned federal funding for abortions, before shifting to oppose it during his 2020 presidential campaign.

Coverage from many right-rated outlets, as well as some left- and center-rated ones, frames abortion as an uncomfortable issue for Biden. Many news sources on the right highlight Biden's former support for allowing states to overturn Roe, and frame him as a hypocrite for invoking his Catholic faith while also supporting abortion rights. Left-rated outlets haven't covered Biden's personal abortion stance as much. One analysis from AP Politics (Lean Left bias) said leading the fight for abortion rights is "not a natural role for [Biden], despite his longtime defense of a woman’s right to choose." 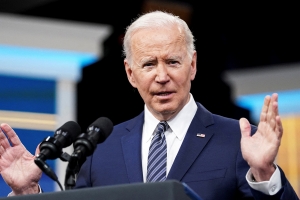 Predictably, President Biden has had nothing meaningful to say about the outrageous, criminal leak of a draft Supreme Court opinion, but he has been quick to demagogue the justices in the putative Court majority for overturning Roe and Casey, as well as Republicans and abortion opponents. What’s at stake, the president says, is “about a lot more than abortion,” and he warned that “this MAGA crowd is really the most extreme political organization in recent American history.”

Putting aside that widespread, vibrant opposition to the taking of unborn life long predates the political emergence of Donald Trump and his...

Read full story
Some content from this outlet may be limited or behind a paywall.
See full media bias rating for Andrew C. McCarthy
From the Left
280
Abortion
Biden says the 'right to choose is fundamental,' but is 'not prepared' to call for change to filibuster to protect abortion rights
CNN (Online News) 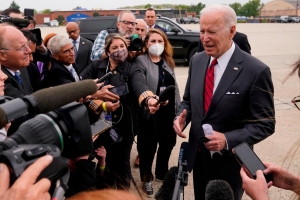 President Joe Biden on Tuesday urged Congress to pass legislation codifying Roe v. Wade and said a woman's right to have an abortion is "fundamental," but said he wasn't ready to call for an end to the filibuster to push for abortion rights legislation.

"Roe has been the law of the land for almost fifty years, and basic fairness and the stability of our law demand that it not be overturned," Biden said in a statement after Politico published a draft of a Supreme Court majority opinion that would strike down Roe v. Wade.... 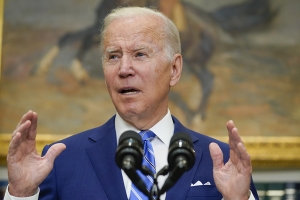 President Biden’s longtime discomfort with the issue of abortion, fueled by his Catholicism and his personal and complex stance on access, has come under scrunity this week with the leak of a Supreme Court draft opinion that shows a majority of justices supporting the reversal of Roe v. Wade.

The president is often criticized for attempting to balance his faith with his support for abortion access. But Biden hasn’t publicaly used the word abortion out loud during his presidency until this week and he also hasn’t called for an end to the...