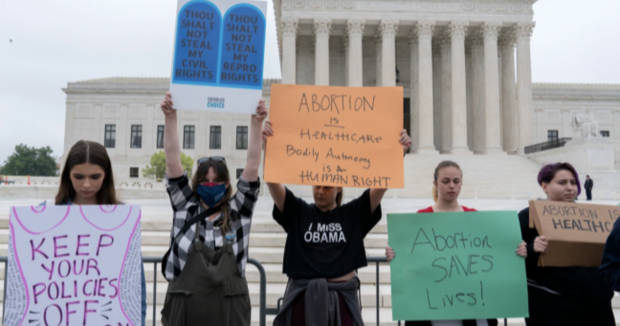 If the opinion becomes final, the decision would effectively remove court-mandated federal protections for the right to pre-viability abortions, and move the responsibility to state (and perhaps federal) legislatures. "Pre-viability" describes the legal standard that abortion should be permitted before a fetus can survive on its own.

Chief Justice John Roberts confirmed that the draft opinion was real while vowing an investigation into the leak, calling it a "singular and egregious breach" of trust.

The leak and apparent decision to overturn Roe were by far the week's biggest story for most major news sources, regardless of their bias. Coverage from right-rated sources often concentrated on the leak, speculation about who leaked the news and whether it constitutes a crime, and its potential consequences for the court. Coverage from left-rated sources more often focuses on the expected restrictions for abortion access nationwide if Roe is overturned. Left-rated voices are typically opposed to the idea of overturning Roe; right-rated voices are generally supportive.

In other news, follow along with our daily updates on the conflict, and read more balanced coverage from this week:

"The throngs of demonstrators amassed outside the US Supreme Court, enraged over a report that a draft majority opinion would strike down abortion rights protected by Roe v. Wade, chanted a crisp, clipped demand to Democratic officials: 'Do something!'"


What Was the Strategy Behind the Supreme Court Leak?

"... if you were simply following a crude strategic logic, the fact that what’s been leaked is a draft from months ago might suggest that a leaker on the conservative side hopes to freeze a wavering justice — Kavanaugh being the obvious candidate — into their initial vote."

Majority of voters support abortion rights as demonstrators rally across US

"The poll of 998 voters also found that a plurality of Americans – 41% – said the country would be a worse place to live if the U.S. Supreme Court overturned the 1973 Roe v. Wade decision that established the right to abortion nationwide. It was conducted hours after the publication of a draft opinion by the top court, signaling that the justices were ready to do just that."

"The president is often criticized for attempting to balance his faith with his support for abortion access. But Biden hasn’t publicaly used the word abortion out loud during his presidency until this week and he also hasn’t called for an end to the filibuster in order for Congress to codify Roe v. Wade as he has for other legislative matters."

"Despite the warnings from liberals that LGBT rights will be the next target of the Supreme Court, Alito specified in his leaked draft, as Blackmun did in the original ruling, that the issue of abortion is substantially different from other issues typically lumped in with abortion in political discourse."

Overturning Roe Would Be a Win for Democracy

"If the reports of Roe’s imminent demise are true, actual American voters will get to decide on abortion law for the first time in almost 50 years. It’s understandable that such a prospect would be terrifying to pro-choicers who have grown accustomed to their views on the issue being insulated from democratic accountability. But their sudden concern for “democracy” is, to put it lightly, ironic."