Will Your State Ban Abortion if the Supreme Court Overturns Roe v Wade?

The Supreme Court has voted to overturn Roe v. Wade, according to a draft opinion obtained by Politico (Lean Left bias). What will this mean for abortion access where you live?

The Supreme Court confirmed the authenticity of the draft opinion, written by Justice Samuel Alito. The vote on overturning Roe was reportedly 5-4, with Chief Justice John Roberts joining the court’s 3 liberal justices. Both pro-life and pro-choice demonstrators gathered Monday night at the Supreme Court and in cities around the country.

Without Roe, state governments will determine their own abortion policies. While many states like California and New York have laws protecting abortion rights, many others have “trigger” laws that would automatically ban all or nearly all abortions. Texas’ trigger law, for instance, would make performing an abortion a felony.

Coverage of the Supreme Court’s leaked draft opinion dominated headlines across the spectrum Tuesday morning. Left and center-rated outlets were more likely to publish maps of state abortion laws. Coverage from the right focused more on the leaking of the draft opinion. 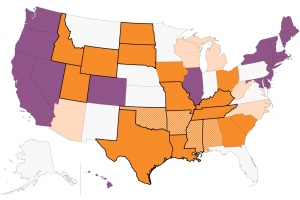 The Supreme Court may soon be ready to overturn the only federal abortion protections in the country, according to a draft of an opinion obtained by Politico. The court is expected to announce its ruling, on Dobbs v. Jackson Women’s Health Organization, sometime before July.

“We hold that Roe and Casey must be overruled,” the draft document says, citing two landmark Supreme Court rulings protecting the right to abortion, the 1973 Roe v. Wade decision and the 1992 Planned Parenthood v. Casey decision. Together, they establish a constitutional right to an abortion until about 24 weeks into a pregnancy, or when...

Read full story
Some content from this outlet may be limited or behind a paywall.
See full media bias rating for Washington Post
From the Center
280
Abortion
"Trigger law" would ban abortion in Texas if Roe v. Wade is overturned
Axios 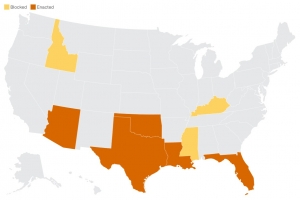 A so-called "trigger law" that would go into effect in 30 days if the Supreme Court overturns Roe v. Wade would make performing abortion a felony in Texas.

Driving the news: According to a draft opinion obtained by Politico — which Axios cannot independently verify — the U.S. Supreme Court intends to overturn the landmark 1973 case, reversing five decades of constitutional protection for abortion. 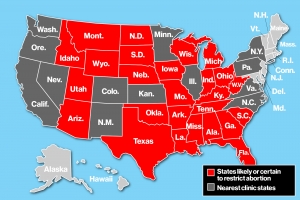 If Roe v. Wade is overturned by the US Supreme Court, 26 states are likely to restrict abortion, impacting more than 40 million women of child-bearing age, according to a report.

The Guttmacher Institute, a New York-based pro-choice research organization, reported last year that 22 states already have anti-abortion laws that would kick in as soon as Roe v. Wade falls.