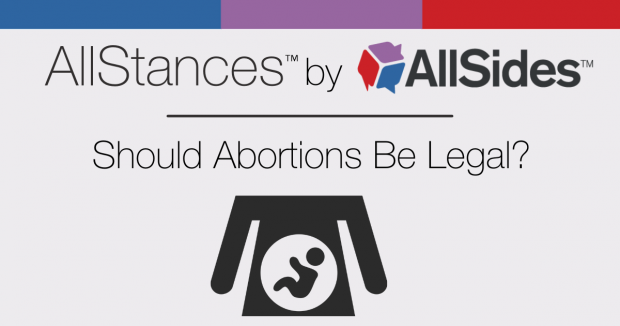 What are the arguments for and against abortion? Is abortion murder, or is it a constitutional right that should be protected?

Explore all opinions, perspectives, stances, and arguments for and against abortion rights with AllStances™ by AllSides.

The debate around the legality of abortion stretches back to 1818 with the State of Connecticut v. Ammi Rogers case, which led to Connecticut becoming the first state to pass a law criminalizing abortion. Since then, abortion policy has been a key point of contention in U.S. politics.

Americans who believe women should have access to safe and legal abortions call themselves “pro-choice,” while “pro-life” Americans believe that abortion should be banned in all or most circumstances.

Some polls have shown a partisan gap in views on abortion policy, with Democrats more likely to say that abortion should be legal in all or most cases. Polls have also shown a good deal of common ground on abortion policies.

The issue has been at the forefront of national politics with the controversial Texas Heartbeat Act, which bans abortion once a fetal heartbeat is detected (typically around six weeks into a pregnancy). The legislation also authorizes private citizens to bring civil lawsuits against abortion providers or other individuals breaking the law. Other Republican states have now followed in Texas' footsteps and passed similar laws that restrict abortion access.

Does a woman’s autonomy over her own body outweigh the rights of a fetus, or should all human life be protected at all pregnancy stages? Does access to safe and legal abortions lead to better outcomes for women, particularly in developing countries? Or does the negative psychological aftermath of abortion on women mean we should discourage this practice?

Explore all the arguments, stances and perspectives around abortions. (Keep in mind that stances aren't mutually exclusive — some viewpoints might align with multiple stances.)

Stance 1: Abortion Should Be Legal Under All Circumstances

CORE ARGUMENT: Abortions are a constitutional right, and women’s right to choose what happens to their bodies should not be limited in any way.

Stance 2: Abortions Should Be Legal Up Until the Third Trimester

CORE ARGUMENT: Abortion is wrong when the fetus is more developed and could survive on its own, but abortions earlier in pregnancy should be up to the mother.

Stance 3: Abortions Should Be Allowed Only in Rare Cases

CORE ARGUMENT: Abortions should only be legal under certain circumstances such as rape, incest, and the health of the mother.

Stance 4: Abortion Should Be Banned

CORE ARGUMENT: Abortions are morally wrong — they end an innocent life and have a negative effect on relationships between men and women.