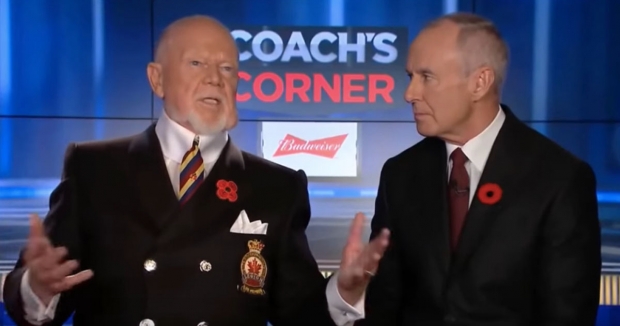 Longtime TV personality Don Cherry, considered by many to be a legendary personality due to his 38-year career, was fired by Sportsnet Monday after he said not enough people (or immigrants, depending on whom you ask) in Toronto wear poppies to honor veterans on Remembrance Day. The subsequent coverage revealed significant media bias on the left and the right.

View Cherry’s comments in full below:

Wearing artificial poppies every November 11 is a Canadian and British tradition. It’s meant to honor veterans and those who died in war, and was started in 1921.

Many media outlets with Left and Center AllSides Media Bias Ratings reported on Cherry’s comments as racist, divisive and anti-immigrant; those on the Right covered his comments more charitably, reporting that Cherry was simply criticizing all of those who do not honor military veterans.

As AllSides outlines in our 11 Types of Media Bias guide, media bias is often revealed in how a journalist spins a story or when they frame opinion statements as fact. The beliefs of individual journalists in the case of Don Cherry’s firing were often revealed in their word choices.

For example, in a Yahoo! News piece (Lean Left bias), a reporter labeled Cherry’s comments as “racist,” “divisive,” “derogatory,” and “insensitive.” This characterization of Cherry’s remarks represents an opinion, but this piece was not clearly labelled as such, and ran as a news piece: 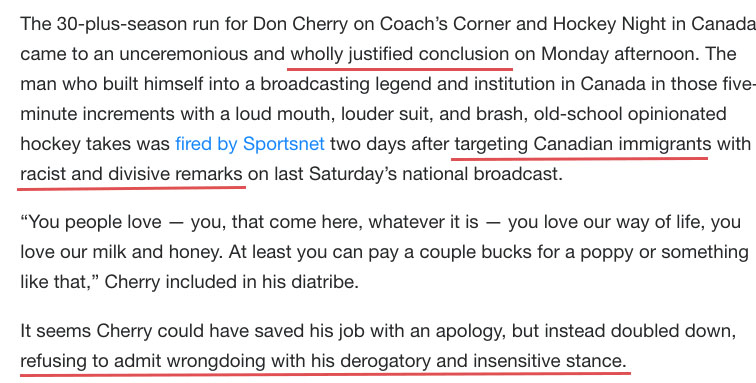 Some reporters also employed slant, a type of media bias when a news outlet only tells part of a story. One example was in coverage from the New York Times (Lean Left bias), which wrote that Cherry’s comments were “widely viewed as a racist attack on the patriotism of immigrants,” omitting the fact that many people on the other side did not find Cherry’s comments to be racist (evidenced in the replies to this tweet):

Some right-wing media outlets employed sensationalism in their coverage, such as The Post Millennial (Lean Right bias), which wrote that people on Twitter were “losing their minds” over Cherry’s comments. The Post Millennial also framed Cherry’s comments more charitably than left and center outlets, writing that he was criticizing all of those, immigrant or native, who do not pay their respects to veterans, rather than characterizing his comments as a racist attack targeted at people due to their race: 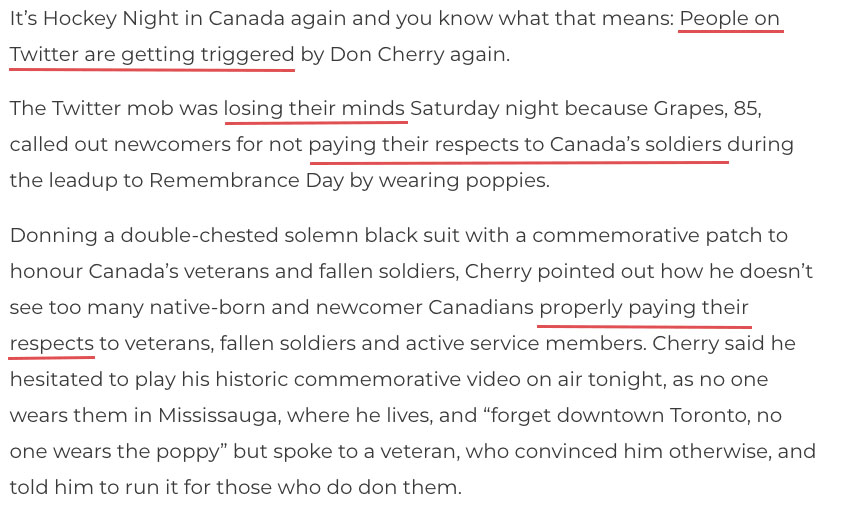 Those on the left largely view Cherry’s comments as racist and anti-immigrant because the left tends to define racism as not limited to conscious intent, but as encompassing unconscious bias. This is why they took his use of the words “you people” to be derogatory, or a racist microaggression. The left often charges someone with racism without explicit evidence the behavior or remarks of the accused were based on race, due to their belief that racism can operate as unconscious bias. In other words, many of those on the left believe that even though Cherry didn’t explicitly say the word “immigrant” or mention race outright, his bias against immigrants and people of color was implied.

On the other hand, the definition of “racism” encompasses a more narrow range of thought and behavior for conservatives. Conservatives see racism as an endorsement of one’s own racial group’s superiority, a belief about another racial group’s inferiority, or harmful behavior directed at someone specifically because of their race. Conservatives often require a higher standard of proof, relying on explicit evidence rather than implicit assumptions to charge someone with racist behavior. Because it's debateable as to whether or not Cherry was singling out immigrants, the right defends his comments as a critique of behavior that applies to all (Cherry himself attempted to clarify this after the fact). They don’t believe this remarks were racist, because a) he didn’t explicitly mention immigrants or race or say that only immigrants are guilty of not wearing poppies b) he didn’t endorse racial superiority or say that people who don’t wear poppies are inferior on the whole — just that their specific behavior deserves criticism.

The differences in media coverage around Don Cherry’s firing reveal why it’s important to know how to spot bias in the news and read different perspectives. In a polarized media environment, where bias often masquerades as fact, it’s crucial to decide what you think for yourself.

This piece was reviewed by Henry Brechter, Daily News Editor at AllSides. He has a Center bias.