Our records indicate that this outlet does not have a paywall. If this is incorrect, please email us to let us know.

In the July 2021 AllSides Blind Bias Survey, in which people across the political spectrum rated original content from Yahoo News without knowing the source, the average rating was Lean Left. 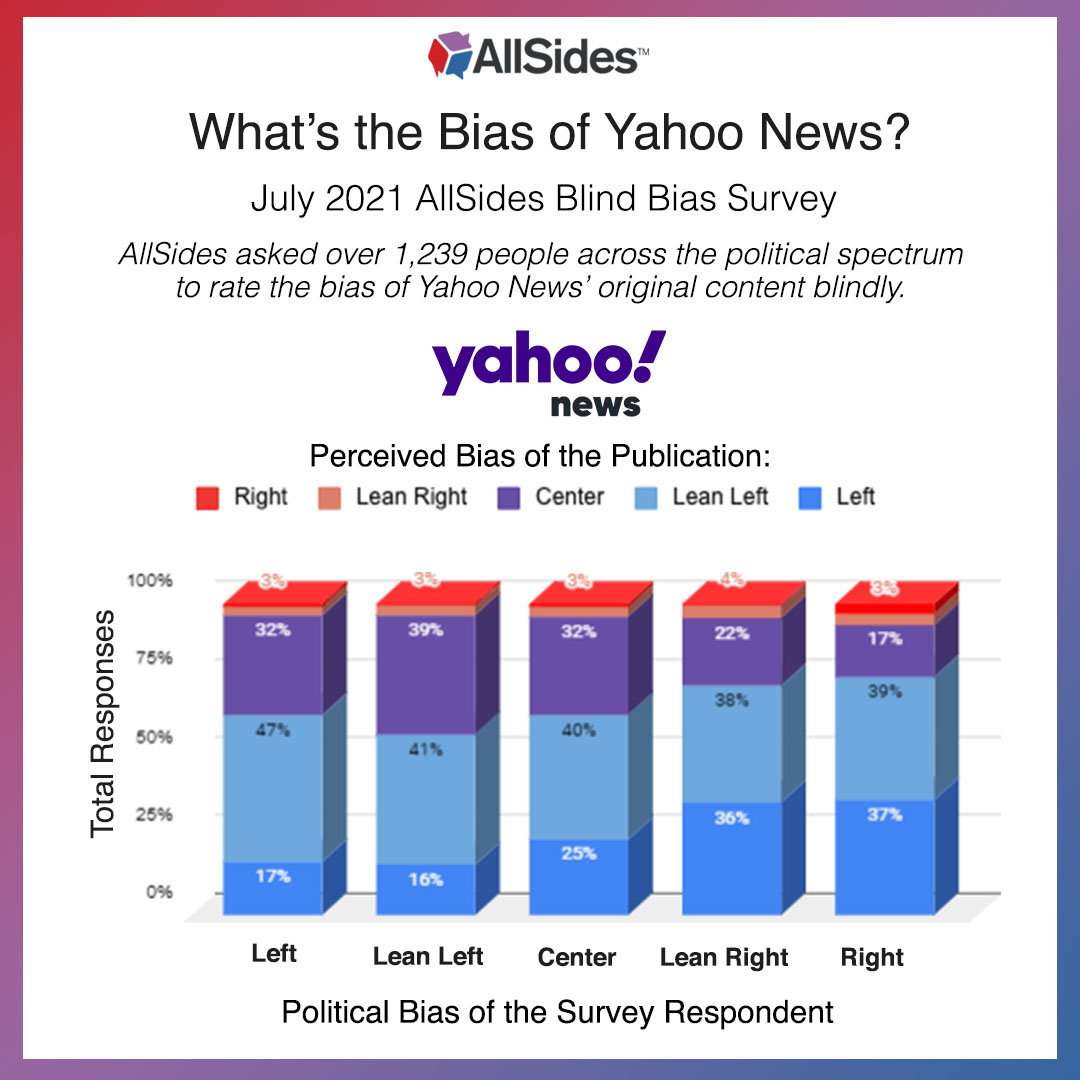 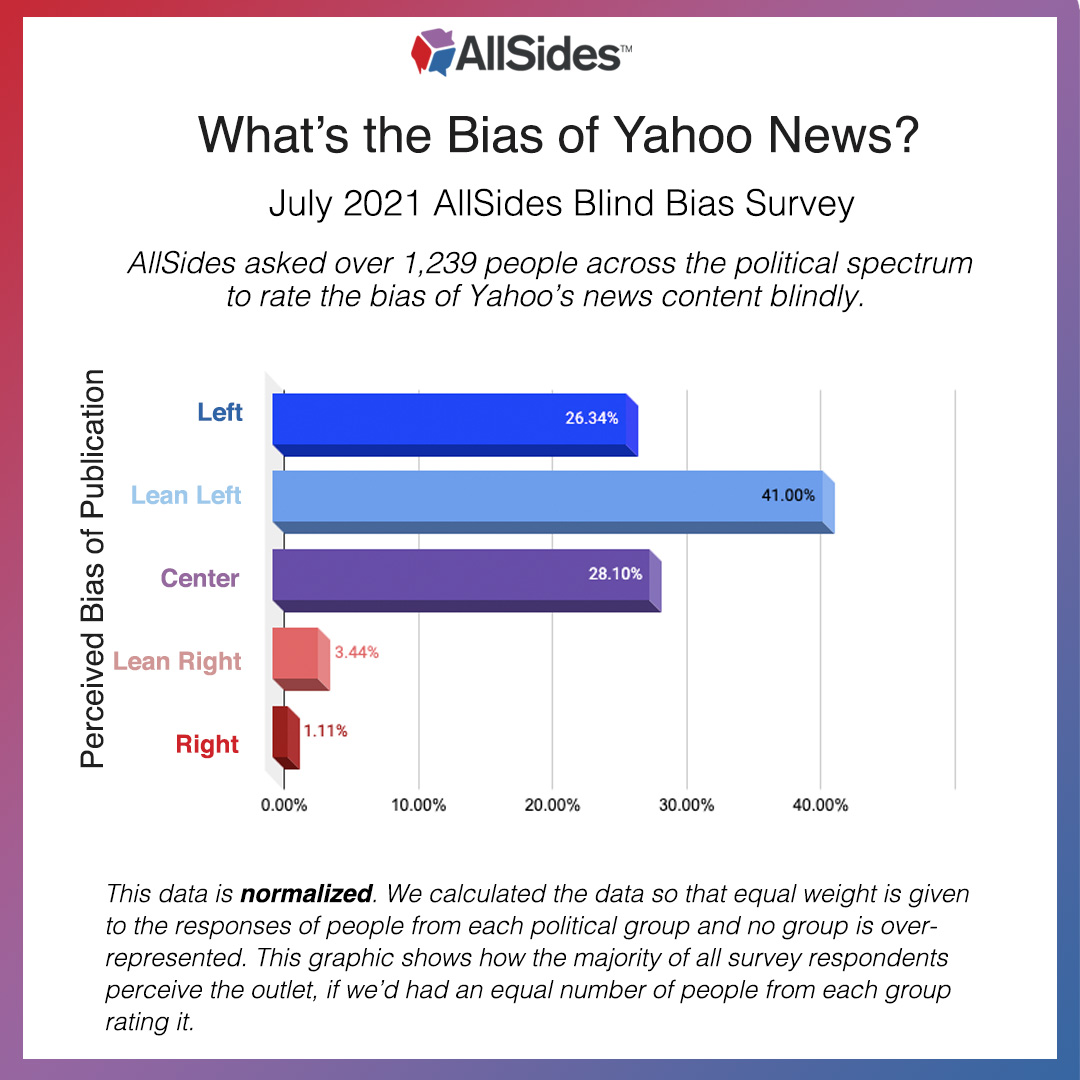 Yahoo News content is personalized to the reader to some degree. One way we noticed this was through our CEO who loves Star Trek. Every time he opens Yahoo!, he sees headlines about the show! Each member of the AllSides team saw slightly different articles on the Yahoo homepage, though there was a lot of overlap in what was featured for all of us. We also used the Internet Archive Way Back Machine to see previous captures of the Yahoo News page, and those pages do not capture our individual preferences.

Yahoo News features both original reporting and content that is curated from partners. Media outlets including the New York Times, the Daily Beast, Reuters, National Review, Associated Press, and others were featured when we conducted our review. The AllSides team arrived at its media bias rating of Yahoo! by judging all of the news that Yahoo listed, regardless of whether it was Yahoo original content or if it came from another source. We made no distinction about the source of the news, but, like other news sites, considered what news was covered (or not covered), the headlines, the position of those articles on the page, and the content of the articles.

Although a small majority of the AllSides community who voted (3,000 votes), agreed with our previous media bias rating of Left, our team had noticed anecdotally that Yahoo News had changed its news coverage and approach. We had personally become fans of The 360, one of their news services, so we decided to do a new, formal editorial review.

We were pleased to find that Yahoo News is less biased than it has been in the past. Yahoo News has shifted more towards the Center in recent years, though it is not balanced enough to warrant a Center rating. Some conservative media outlets and perspectives are represented on the site, though the site appears to favor news on topics commonly of interest to those on the left. The team agreed that Yahoo is not a far Left outlet, and that it does not employ sensationalism or extremism. We were happy to see that, in a media landscape where many outlets are becoming more extreme or biased, Yahoo is moving towards balance.

There was even some discussion about giving it a Center rating, but the consensus was that there is still some Left Leaning bias. The news industry in general is mostly comprised of Left media outlets, so it may be that Yahoo's curation reflects the majority of the landscape. Regardless of the reason, Yahoo's choice of article topics leans a little to the left. For the most part, right-leaning perspectives and issues of importance to people on the right are not represented as often.

A 2014 Pew Research Center study defining where news audiences fit on the political spectrum found 41% of Yahoo News! consumers are of mixed political persuasion, compared to 36% of web respondents; 24% of readers are mostly liberal, and 18% are mostly conservative.

AllSides previously rated Yahoo's media bias as Left. In August 2018, AllSides conducted an editorial review that included people from all over the political bias spectrum. We had a difficult time determining if Yahoo warranted a Lean Left or Left media bias rating. We decided on Left.

AllSides noted that Yahoo's media bias was revealed not so much in how their original content is reported, but in what topics they report on and curate. At the time, we found that much of Yahoo!'s curated content came from the Huffington Post, ThinkProgress, and other Left-leaning outlets. We determined that Yahoo News is consistently Left, and they don't distinguish clearly between Opinion, hard news and aggregated content. Yahoo's media bias is largely revealed in the choices of what they choose to feature and aggregate.

Yahoo News is a news website that originated as an internet-based news aggregator by Yahoo, according to Wikipedia. By 2011, Yahoo expanded its focus to include original content.