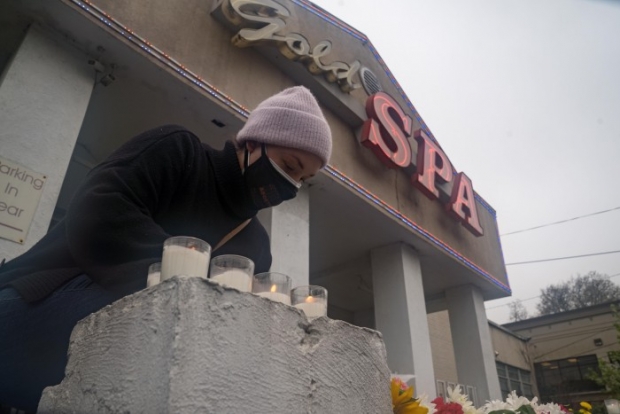 A series of shootings in Atlanta, Georgia, on March 17 that left eight people dead was followed by another mass shooting in Boulder, Colorado on Monday in which 10 people were killed. The Atlanta shooting sparked widespread speculation among media and activists about a race-based motivation; police reportedly have no evidence that racism motivated either of the shootings, which led some to criticize the media's focus on racial narratives. Six of the eight people killed in the Atlanta shooting were Asian women, and all 10 victims in Colorado were white. After the Atlanta shooting, President Joe Biden and Vice President Kamala Harris addressed the nation, condemning racism; after the Colorado shooting, Biden urged the Senate to pass gun control legislation, including an assault weapons ban. The White House also suggested Biden would consider taking executive action on guns.

All sides of media covered the shootings, the alleged shooters and the victims extensively. Left-rated media often focused more on the victims, their stories, and the push for gun control, and tended to tie the Atlanta shooting to data that suggests hate crimes against Asian Americans are rising. Right-rated media focused more on reactions to the shooting in the political world, as well as potential gun rights legislation. Some right-rated voices accused mainstream media and prominent people on the left of unjustly creating a racial narrative around both shootings.

Perspectives: Why did many news outlets tie the Atlanta shooting to racism, even though there's no evidence of a racial motive? Were they justified in doing so?; and despite stereotypes to the contrary, surveys say that many Republicans and Democrats both support international cooperation and alliances.

More from AllSides: Sick of "fact checks" that aren't really just checking the facts? Use our Facts and Fact Checking portal to compare facts, fact-checking and analysis from across the spectrum; Download the AllSides mobile app for balanced news on the go. Available for iOS and Android; and you can support our work and mission by becoming a Sustaining Member of AllSides. Sustaining memberships allow you to read AllSides ad-free.

"Democrats have used the deadly shootings to call for an end to the filibuster, claiming it would be impossible to get the ten Republican votes that would be required to pass new gun restrictions in the Senate, such as background check expansion and gun bans that President Biden has supported."

"Several prominent leftists took to social media and immediately assumed the shooter in Boulder, Colorado, was white before details about his identity were released. Police revealed Tuesday morning the shooter was 21-year-old Ahmad Al Aliwi Alissa. The suspect was injured during a shootout with police and taken to the hospital. The new information led some users to issue corrections or delete their posts, which assumed the shooter’s race and motives."

"Colorado, a state where open carry is legal, has suffered through some of the most deadly mass shootings in American history, including the 1999 Columbine shooting and the Aurora theater attack in 2012, which have fundamentally changed safety measures in modern day America...While Colorado now has universal background checks, a large-capacity magazine ban and state database background checks, advocates say the state is missing assault weapon restrictions, waiting periods, open carry regulations and gun owner licensing."

House to take up immigration reform bills amid border crisis

"Obviously, there are still a lot of unknowns, and a lot hasn’t been confirmed yet. But it’s very clear to me that six Asian women were killed, and there were specific Asian businesses that were targeted. I cannot stress enough how pervasive this fear has been. We’re afraid to go in public and go to our jobs. Just simple day-to-day living has been compromised in the past year."

"Advocates for strengthening hate crime laws say the current statutes are too narrow and rely too heavily on interpretations of a suspect’s motivations, which are often difficult to attribute to a single factor...Critics of expanding hate crime laws say stronger prison sentences for individual criminals will do little to eliminate prejudice. They argue that it’s foolish to expect the criminal justice system to lead the way to a more tolerant society."

"Mass shootings – incidents that injure or kill more than four people, not including the perpetrator – rose nearly 50% in 2020 amid the pandemic that left millions unemployed and millions more teenagers idle. USA TODAY analysis of Gun Violence Archive statistics show mass shootings rose from 417 in 2019 to 611 in 2020, including 95 incidents in June 2020 alone."