Police reportedly have no evidence that racism motivated the recent mass shootings in Atlanta and Boulder, Colo. However, news media on all sides covered the tragedies through a racial lens. Many left- and center-rated outlets framed the Atlanta shootings alongside reports of rising anti-Asian hate crimes after it was revealed that six of the eight victims in Atlanta were Asian women, that the shootings occurred at Asian-owned businesses, and that the alleged shooter is white. Some right-rated media concentrated on race following the Boulder shooting, and the fact that the accused shooter is Middle Eastern and that the 10 people killed were white.

Commentary about this media coverage often differed along partisan lines. Some left-rated voices accused mainstream media of unjustly downplaying potential racism the Atlanta shootings, saying outlets failed to adequately serve underrepresented communities with their reporting. Many right-rated voices accused media of rushing to create a racial narrative in the Atlanta shootings; some also criticized left-leaning figures for assuming the Colorado shooter was white. Other voices criticized both left and right-rated media for concentrating too much on racial narratives and not enough on potential solutions to gun violence and crime. 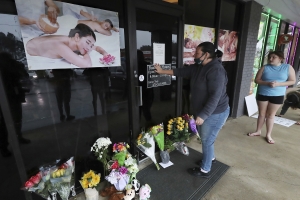 On March 17, the day after the Atlanta spa shootings that killed eight people — six of whom were women of Korean and Chinese descent — the Asian American Journalism Association (AAJA)’s website crashed.

“We’re troubleshooting @AAJA website, which is crashing from the traffic after we released guidance on covering the Atlanta shooting. It’ll be back up shortly, but please share these screenshots in the meantime,” AAJA president and Washington Post reporter Michelle Ye Hee Lee tweeted.

The AAJA had outlined guidance for newsrooms to cover the mass shootings without... 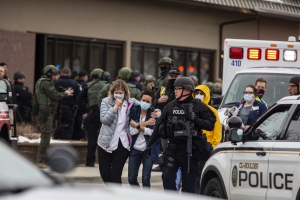 Every time there is a mass shooting in the U.S., partisans on both sides hold their collective breath waiting for the perpetrator to be identified in order to see whose worldview will be vindicated. The left gets excited about murders involving police officers shooting unarmed black people, as well as those perpetrated by white supremacists or believers in QAnon; the right highlights Muslim terrorists and Antifa. Yet the number of killings in 2020 that can be attributed to all of these causes put together is in the dozens, representing a...

Read full story
Some content from this outlet may be limited or behind a paywall.
See full media bias rating for Newsweek
From the Right
5183
Media Bias
The left, mainstream media turn Boulder shooting into yet another racial powder keg
Tucker Carlson 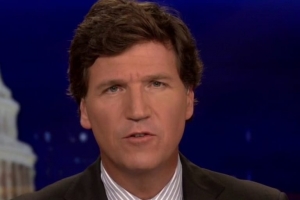 After lunch on Monday, a man walked into a grocery store in Boulder, Colorado and shot 10 people to death. One of those slain was a police officer called Eric Talley. Eric Talley had seven children. His youngest child was just five years old. Your heart breaks for his family.

Police responded quickly to the massacre and they arrested a 21-year-old suspect. Here's how CNN described the scene.

LUCY KAFANOV, CNN: We know that the suspect is in custody. He was injured. They have not released any details about who...