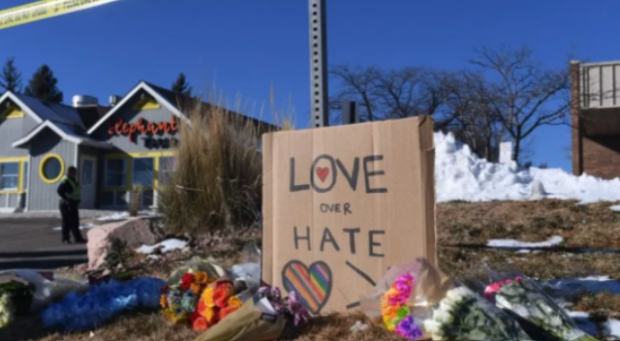 On Saturday, Nov. 19, close to midnight, a 22-year-old suspect entered an LGBTQ+ club called Club Q in Colorado Springs, shot and killed five people, and wounded several more. Here’s how coverage of the shooting has differed on the left and right.

What the Left is Saying

On social media, a number of politicians and public figures criticized Lauren Boebert (R-CO) and commentators on the right for pushing anti-LGBTQ rhetoric that, in their view, encouraged the attack.

Alexandria Ocasio-Cortez (D-NY), Rep.-elect Robert Garcia (D-Calif.), Rep. Brianna Titone (D-CO), and Chasten Buttigieg (husband of Secretary of Transportation Pete Buttigieg) were among the politicians commenting on Boebert’s reaction. After the shooting, Boebert tweeted, “The news out of Colorado Springs is absolutely awful. This morning the victims & their families are in my prayers. This lawless violence needs to end and end quickly.”

Detractors drew attention to her constant support of gun rights and her comments about drag queens, saying she was hypocritical and her rhetoric contributed to the causes of the shooting.

Editorials did not shy away from joining in critiquing Boebert.

HuffPost (Left) described her as “a gun-promoting extremist known for anti-LGBTQ rhetoric, said victims of a mass shooting in her state ‘are in my prayers.’"

BuzzFeed’s (Left) headline: “Here’s How Rep. Lauren Boebert Smeared LGBTQ People On Social Media Before Offering Prayers For The Victims Of The Colorado Springs Gay Club Shooting.”  It described Boebert as “known for her anti-LGBTQ rhetoric, pro-gun activism, comments against Muslims, and support for far-right conspiracy theories” and critiqued her tweet responding to the shooting for “not mention[ing] that the shooting had taken place at a gay club — a notable omission, considering her proclivity for tweeting about the LGBTQ community, typically with unabashed disdain.” Buzzfeed continues by generalizing conservatives as hateful toward LGBTQ+ people saying, “Boebert's "grooming" comments stem from a growing wave of anti-LGBTQ rhetoric that has coalesced into a right-wing moral panic. Conservatives have repeatedly smeared LGBTQ people and their allies as pedophiles and child predators — baseless claims that have roots in age-old anti-gay tropes and conspiracy theories like QAnon.”

USA Today (Lean Left) posted an article that said, “While gays and lesbians have long been targets for abuse, the transgender community, in particular, has come under attack recently as conservatives try to strip away their protections against discrimination.”

Michelle Goldberg argued in the New York Times opinion section (Left) that “During the early years of Donald Trump’s administration, conservatives downplayed the contempt for homosexuality and gender nonconformity that had once been central to their movement, foregrounding racial resentment instead.”

A number of articles from left-rated media included discussion of the effects of “far-right” influencers or “hate-mongering Republicans.” Many articles honed in on anti-LGBTQ+ rhetoric using Marjorie Taylor Greene (R-GA), Boebert, and DeSantis as examples, but not targeting all conservatives or Republicans.

Axios (center) reported that the alleged shooter identifies as non-binary almost three days after the shooting. Some outlets on the left covered the story including CBS (Lean Left), NBC (Lean Left), and The Independent (Lean Left), but the store was more widely covered on the right, showing story choice bias.

Regarding motive, some left-rated outlets reported on the suspect’s relationship with Encyclopedia Dramatica, a website MSNBC (Left bias) labeled a “hate site” tied to multiple mass killings; Vice (Left bias) called it “a site that does intentionally offensive and overly edgy Wikipedia-style entries about internet figures.” The suspect reportedly endured years of harassment from the site, including accusations of pedophilia.

Some reporting from the left specifically focused on potential anti-LGBTQ motives. A Daily Beast article quoted the suspect’s neighbor, who said they had used anti-gay slurs and sometimes got into arguments with their mother after “saying hateful things.” A Vice article cited “trans activists” who warned that the suspect identifying as non-binary could be a “troll,” or an ironic joke intended to provoke an audience.

What the Right is Saying

An opinion piece in the Washington Examiner (Lean Right), “Leftists pounce on the Club Q tragedy to attack not the shooter, but the GOP” emphasizes the trend on the left of citing Republicans as blameworthy for harmful rhetoric in the years leading up to the shooting.

More outlets on the right reported on the suspect’s gender identity than those on the left. Since the shooter being non-binary could cast doubt on the idea that they were motivated by right-wing rhetoric, covering this angle could be seen as an attempt to deflect criticism and frame Democrats as jumping to conclusions.

In an op-ed, The American Conservative (Right bias) compared the media’s coverage of the Club Q shooting to the recent shooting at a Virginia Walmart, and highlighted evidence suggesting that the Club Q shooting was not motivated by LGBTQ hate. “Andre Bing and Anderson Aldrich committed mass murder in recent days,” writes Rod Dreher, “But only one of these killers is useful to the Left's narrative.”

Is the left politicizing a tragedy? Or does hateful rhetoric lead to hate crimes, as they suggest? Does the right have a homophobia and transphobia problem? Or is the left overgeneralizing and overemphasizing?

You can use AllSides LGBTQ+ Community page to understand the LGBTQ+ perspective and others on the Colorado shooting, and read balanced news to better understand where the left and right are coming from. That way, you can form your own opinion and avoid media bias.