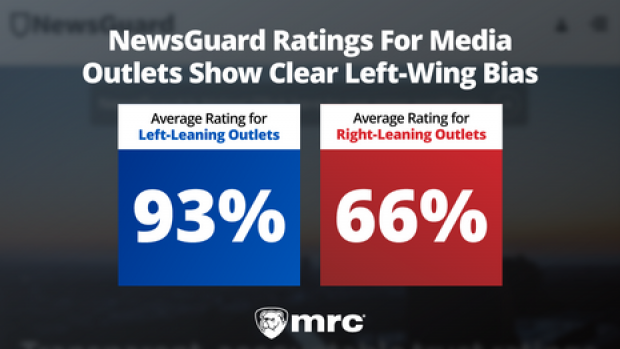 According to MRC’s research, NewsGuard, the browser extension that provides trust ratings for more than 7,000 news and information websites, rates left-wing outlets 27 points higher on average for trust than news organizations on the right.

The AllSides team had an internal conversation about the study. Our team contains people from the left, center, and right. Depending on your perspective/political bias, one of three conclusions could be drawn from MRC’s report:

The alleged disparity in NewsGuard’s ratings, if true, might not be an indication of inaccuracy on the part of outlets on the right, but more so the fact that right-leaning outlets often prioritize opinion and analysis in order to balance out the left’s mainstream media dominance. Left-wing outlets typically have more money and resources to conduct original reporting. Opinion and analysis are by definition “less credible” than supposedly straight news reports, since they deal in the subjective and not objective realm. Perhaps NewsGuard conflates the two, rather than evaluating news reports separately from opinion and analysis.

For MRC’s part, the conclusion is that NewsGuard has a liberal bias.

“MRC Free Speech America analyzed the NewsGuard ratings of media outlets based on a list compiled by AllSides classified by their “bias” on a left-to-right scale,” they write. “The average NewsGuard score for the “left” and “lean left” outlets — which included leftist outlets like Jacobin and The Nation — was 93/100. While the average rating for “right” and “lean right” outlets — which included Fox News, Washington Times and New York Post — was a low 66/100. That’s a 27 point disparity.

MRC points to a number of what they say are examples of high-scoring media outlets pushing misinformation, and argues that they don’t deserve such high credibility scores. Examples include:

MRC also notes that The Federalist (Right) scored 12.5 on NewsGuard, and says a key reason given for the low rating is that The Federalist questioned the efficacy of mask mandates for COVID-19 (AllSides was not able to independently verify NewsGuard's reasoning). MRC says some studies show that cloth masks were only 37% effective at filtering out virus particles, and another preprint study did not find an “association between mask mandates or use and reduced COVID-19 spread in US states.” One AllSides team member on the left noted other studies argued scientific evidence supports mask wearing.

MRC says that organizations that receive a perfect 100 from NewsGuard include The New York Times, The Washington Post, NBC News, Politico, The New Yorker, TIME, Yahoo! News, The Guardian, The Economist and USA Today — all rated Lean Left or Left by AllSides.

Why Some May Consider the Right Less Credible Than the Left

Some consider right-rated outlets less credible than their left-rated counterparts because of the use of sensationalism. Outlets like the New York Times, Washington Post and NBC News do not as often use words that elicit shock which are common in content from Fox News, New York Post or Breitbart (think: "Trump Slams Netanyahu," "Biden Lashed Out...") The bias of left-rated sources is often more subtle and tricky for the untrained eye to spot, as it is more evident in the stories they choose to cover, the viewpoints they prioritize or omit, slant, the use of subjective qualifying adjectives, or the sources they quote. But because sensationalism bias is much more immediately and obviously noticeable, some assume outlets on the right are less credible overall.

Most major right-rated outlets are also younger and smaller than major outlets on the left and lack the resources to conduct original reporting. This may negatively impact the perception of credibility, but not the reality of credibility. Meanwhile, legacy outlets on the left and center often tout their commitment to nonpartisanship and transparency. Whether these values actually shine through in their work might not matter as much to media critics.

No Media Outlet Is Perfectly Credible

In fact, we doubt any media outlet should have a 100% credibility rating. That is not terrible – no one is perfect and we all make mistakes.

Journalists tend to lean left, which reflects in their work. Most large, legacy outlets lean left based on analysis by us and others, and these "establishment press" outlets are often assumed to be more trustworthy by established journalists. NewsGuard’s review staff is mostly made up of longtime mainstream journalists, and an overreliance on establishment press experience may hurt Newsguard’s credibility. According to NewsGuard’s website, at least four people review any given credibility rating for a media outlet —  an analyst, at least one senior editor, and co-CEOs Steve Brill and Gordon Crovitz. We applaud this peer review, though warn against a potential lack of sufficient political or thought diversity. It may help if NewsGuard incorporated the perceptions of people who are not industry insiders, like AllSides does – we balance expert Editorial Reviews with Blind Bias Surveys that can be taken by anyone.

We give kudos and appreciation for any group that helps people to better understand differences in the news. Media literacy is essential in a technological world. However, it is a tall order to do that reliably and in a credible way. We hope NewsGuard can do that, and hope that our analysis can help them with their worthy cause.

At AllSides, we often remind people that we rate bias rather than credibility because an outlet can be credible (meaning, it cites sources, clarifies errors, and draws upon facts) yet still has a political agenda or a bias that can warp the reader’s view.

Just because an outlet is credible doesn’t mean it isn’t biased; likewise, just because an outlet is biased doesn’t mean it isn’t credible. Journalists can use verifiable facts and well-cited sources while still spinning a political narrative or reporting things with a bent that is meant to convince you of their side or to advocate for specific narratives and policy agendas.

AllSides has written at length about why we don’t rate accuracy or credibility. In short, we do not assume we know the truth on all things, nor do we entirely trust ourselves to reliably and accurately recognize truth versus fiction, or (as is more often the case) a gray area.

You may believe that left outlets do generally report more accurately, or that organizations rating accuracy have a lean left bias in which they let misinformation or inaccuracies from left outlets slide. Whatever your belief, rating credibility is tricky; in a world with mass amounts of information, there will always be people arguing the other side. That’s why we display a balanced newsfeed and media bias ratings so you can compare, contrast, and find the truth.

(Update March 18 and 25, 2022: We got feedback from NewsGuard that some people interpretted this report as our endorsement of MRC's research, which was not our intent. AllSides neither endorses nor rejects this MRC report, as we did not assess its methodology in detail ourselves. Many organizations use our media bias ratings in research and analysis, and we often report on their findings. We added a third possible conclusion and made additional edits to remove the unintended implication that we endorse the findings of this particular analysis. We also clarified some examples of accuations of disinformation and included a correction and a detail about the research that were provided by the NewsGuard's team.)