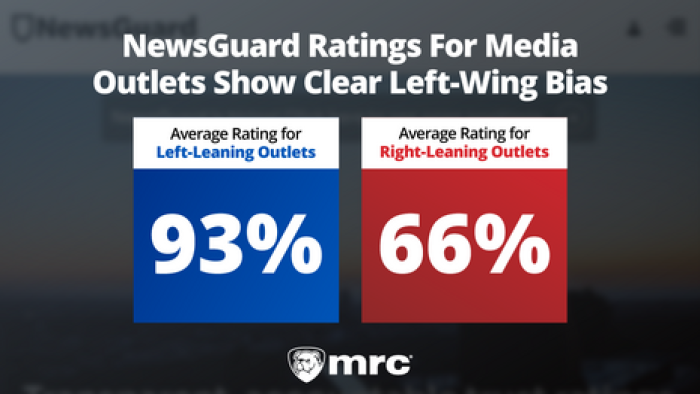 A new analysis reveals the extraordinary left-wing bias of website ratings firm NewsGuard, which should concern every American given that it is expanding its reach into cable and broadcast TV news. Liberal outlets were rated 27 points higher on average than news organizations on the right.

MRC Free Speech America analyzed the NewsGuard ratings of media outlets based on a list compiled by AllSides classified by their “bias” on a left-to-right scale. The average NewsGuard score for the “left” and “lean left” outlets — which included leftist outlets like Jacobin and The Nation — was 93/100. While the average rating for “right” and “lean right” outlets — which included Fox News, Washington Times and New York Post — was a low 66/100. That’s a 27 point disparity.

There were 31 total outlets listed as “left” or “lean left” and  24 outlets listed as “right” or “lean right” by AllSides. AllSides included the opinion sections of news websites separately. MRC Free Speech America excluded any outlet that was characterized as “opinion” to keep the focus on news organizations for the analysis.