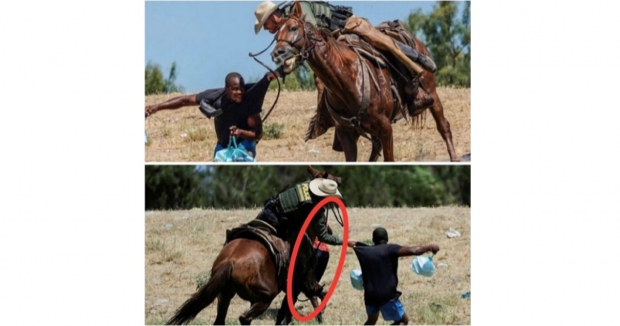 This piece is from an author rated as Lean Right.

Media bias by photo was on display as the press covered the recent migrant crisis in Del Rio, Texas, where over 16,000 unauthorized migrants have recently streamed across the border to a makeshift encampment under a bridge.

A photo of a Border Patrol agent appearing to whip a migrant was widely shared in the press and by reporters on Twitter — yet its misinterpretation fueled media bias by photo and possible misinformation.

"This is absolutely horrifying. Like something out of the 19th century," The Atlantic (Lean Left) staff writer Adam Serwer tweeted. "I don't know about anyone else but I wasn't aware border patrol agents were authorized to use whips on human beings."

But the image isn’t what it appeared to be. Another angle of the photo clearly shows the agent grabbing the migrant, not whipping him. What many thought was a whip actually was a rein, a tool used to drive a horse. And in the initial photo, the agent’s hand grabbing the man’s shirt is still visible behind the reins. 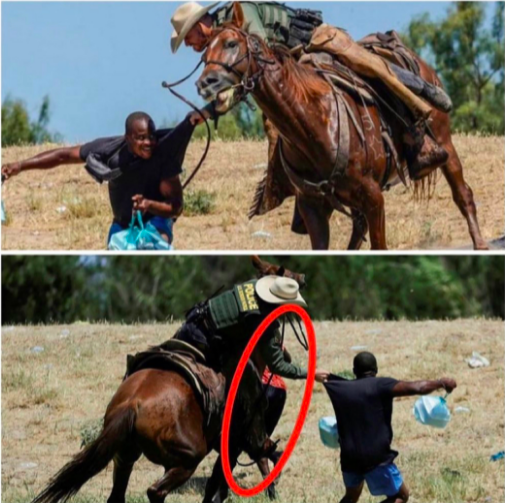 Yet the media quickly ran with the presumption, with outlets on the left and in the center publishing headlines assuming agents were whipping migrants. We compiled some of the headlines below, from outlets such as CBS (Lean Left), Democracy Now (Left), Forbes (Center), Seattle Times (Center) and Newsweek (Center).

Many state or presume that the agent was indeed whipping the migrant. Others took greater care to say it was “apparent” (which could mean either “seeming” or “clear and obvious”). Most employ sensationalist phrases and pull quotes (“greeted by whips and shackles,” “How is that ok?” “sickened by images,” “white supremacy,” “troubling,” “horrifying”):

Meanwhile, others pushed back on the idea.

In an interview with Fox News (Right bias), National Border Patrol Council Vice President Art Del Cueto refuted claims that agents were whipping migrants. He said agents are not assigned whips, and the methods used were within protocol.

The National Fraternal Order of Police also tweeted, “For all you Twitter warriors out there: these are NOT whips. And no, Border Patrol agents are NOT "whipping" people. They are REINS... Stay with us here, like a steering wheel is used to drive a car, the reins are used to “drive” the horse.”

For all you Twitter warriors out there: these are NOT whips. And no, Border Patrol agents are NOT "whipping" people.

They are REINS... Stay with us here, like a steering wheel is used to drive a car, the reins are used to “drive” the horse.

Thanks for coming to our TED talk. pic.twitter.com/r0n2kXHqvy

Other outlets did too, mostly on the right or local outlets unrated by AllSides. Some, like National Review (Right bias), called the whip idea a “narrative.” Others, like The New York Post (Lean Right), highlighted remarks from Homeland Security (DHS) Secretary Alejandro Mayorkas’ and Border Patrol Chief Raul Ortiz’s. While Ortiz said an investigation would take place, both men said they see nothing wrong with how the agents acted. Mayorkas explained that agents use long reins to control their horses. National Review also highlighted Chinese Communist Party (CCP) state media propaganda that reinforced the “whips” idea. 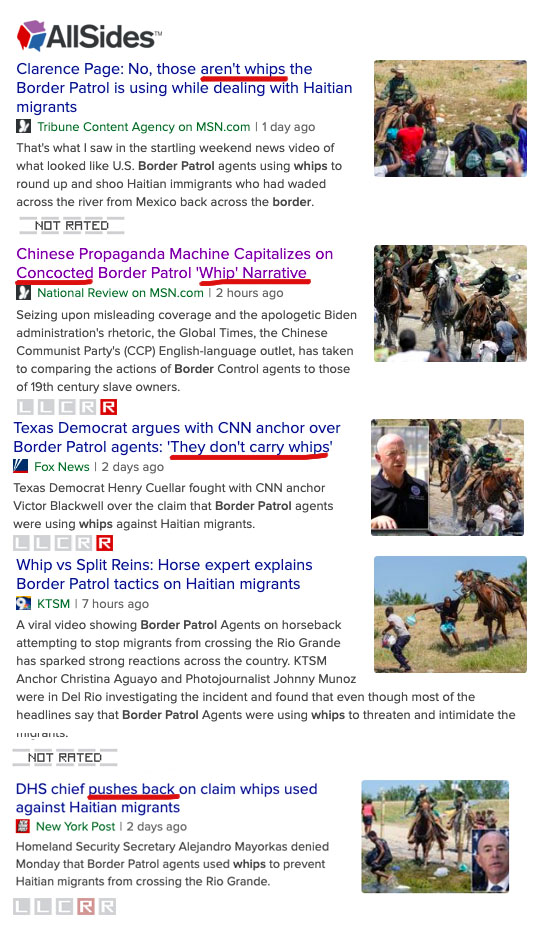 The center-left media angle has had real repercussions: the men accused of whipping migrants have been assigned to desk duty, and many who read the news likely think our Border Patrol agents were employing tactics they weren’t actually using — an example of misinformation. While it’s possible that agents somehow used their horse’s reins to whip at migrants, there’s no current evidence of it, and a DHS investigation is currently underway to determine if any wrongdoing by the border patrol agents actually occurred.

Media Bias by Photo is Common

Media bias by photo is a type of media bias in which photos are used to shape the perception, emotions or takeaway a reader will have regarding a person or event. In the case of the Haitian migrants, those who believe it's too hard for people to become American citizens and that migrants should be welcomed and processed instead of deported interpreted the “whips” image as reinforcing their perspective that the U.S. border policy is cruel and inhumane. It could also simply point to a sort of urban or elite bias — it’s safe to assume journalist urbanites don’t typically know much about riding horses and the equipment used to do so.

We highlighted another case of media bias by photo recently on Biden’s presser on Afghanistan, when mostly right-wing media outlets seized on an image of Biden looking down and appearing exasperated or worn down. People who criticized Biden’s Afghanistan withdrawal used the image to drive home their perspective on the situation and of Biden’s leadership.

Whenever you are reading the news, it’s important to keep media bias by photo in mind. Photos may not always be what they seem, and they may be used to reinforce a particular perspective or worldview. In order to get the full story, always explore information across the political spectrum.