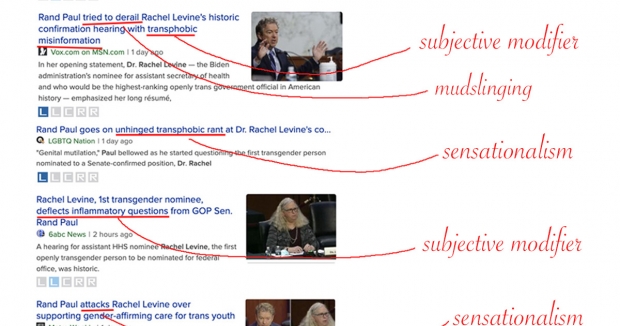 Media bias was on full display following an exchange during Dr. Rachel Levine’s confirmation hearing last Thursday in front of the U.S. Senate.

Dr. Levine is President Joe Biden’s nominee for Assistant Secretary of Health and is transgender. During the hearing, Sen. Rand Paul (R-KY), who is also a physician, asked Dr. Levine about whether or not she believes minors are capable of making the decision to change their sex, by means such as hormone blockers.

Sen. Paul asked, “Do you believe that minors are capable of making such a life-changing decision as changing one’s sex?” And later, “Do you support the government intervening to override the parent’s consent to give a child puberty blockers, cross-sex hormones, and/or amputation surgery of breasts and genitalia?”

Here’s a video of the exchange:

Both the left and right both covered the exchange quite differently, displaying numerous types of media bias. The left was more likely to add subjective qualifiers to characterize Sen. Paul’s questions, to accuse him of lying, or to label him or his questions as transphobic; right-wing media was more likely to point out that Dr. Levine appeared to evade the question. Both sides used sensationalist language.

Here’s a smattering of left-wing headlines, plus one center, on the exchange. I’ve underlined keywords that indicate bias: 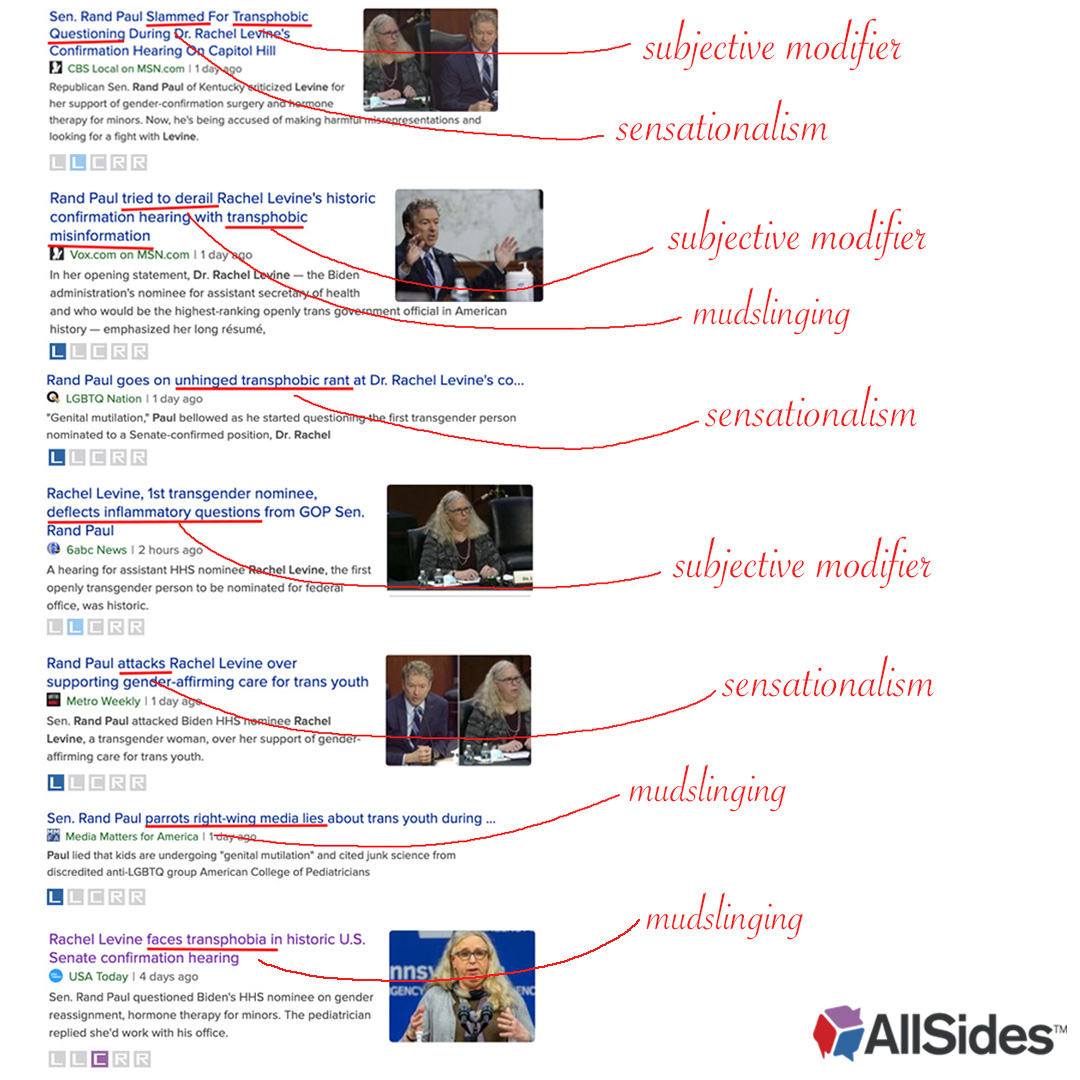 Another type of media bias on display is mudslinging. Mudslinging is when the media attacks someone’s character. Here, Media Matters (Left bias) accuses Sen. Paul of lying, Vox (Left) says he tried to “derail” the hearing, and USA Today (Center) accuses him of transphobia — accusations about his inner world, that he has poor character and harbors fear and ill will.

Finally, we see subjective modifiers presented as fact. Some of the subjective modifiers used in the headline samples above are “unhinged,” “inflammatory” and “transphobic.” All point to interpretations of Sen. Paul’s underlying attitudes, beliefs and feelings that can’t be objectively verified, but are the result of someone deriving meaning from his remarks.

Subjective modifiers are descriptors based on personal opinions, assumptions, beliefs, tastes, preferences, or interpretations; they reflect how the writer interprets something. They largely reflect the meaning derived from an event, so they are colored by the writer’s specific perspective or lens and cannot be verified using concrete facts and figures. Someone else may come away with a different meaning of the same event.

There are objective modifiers — “blue”; “old”; “single-handedly”; “statistically”; “domestic” — for which the meaning can be verified through observation. On the other hand, there are subjective modifiers — “suspicious”; “dangerous”; “extreme”; “dismissively” — which are a matter of interpretation.

Subjective characterizations are okay in opinion and analysis reporting that is clearly labeled, but should be avoided in hard news pieces that are presented as fact. None of the above articles were labeled analysis or opinion.

Right-wing media characterized the exchange much differently. They showed their bias via sensationalism, and by highlighting Dr. Paul’s accusation that Levine dodged the question: 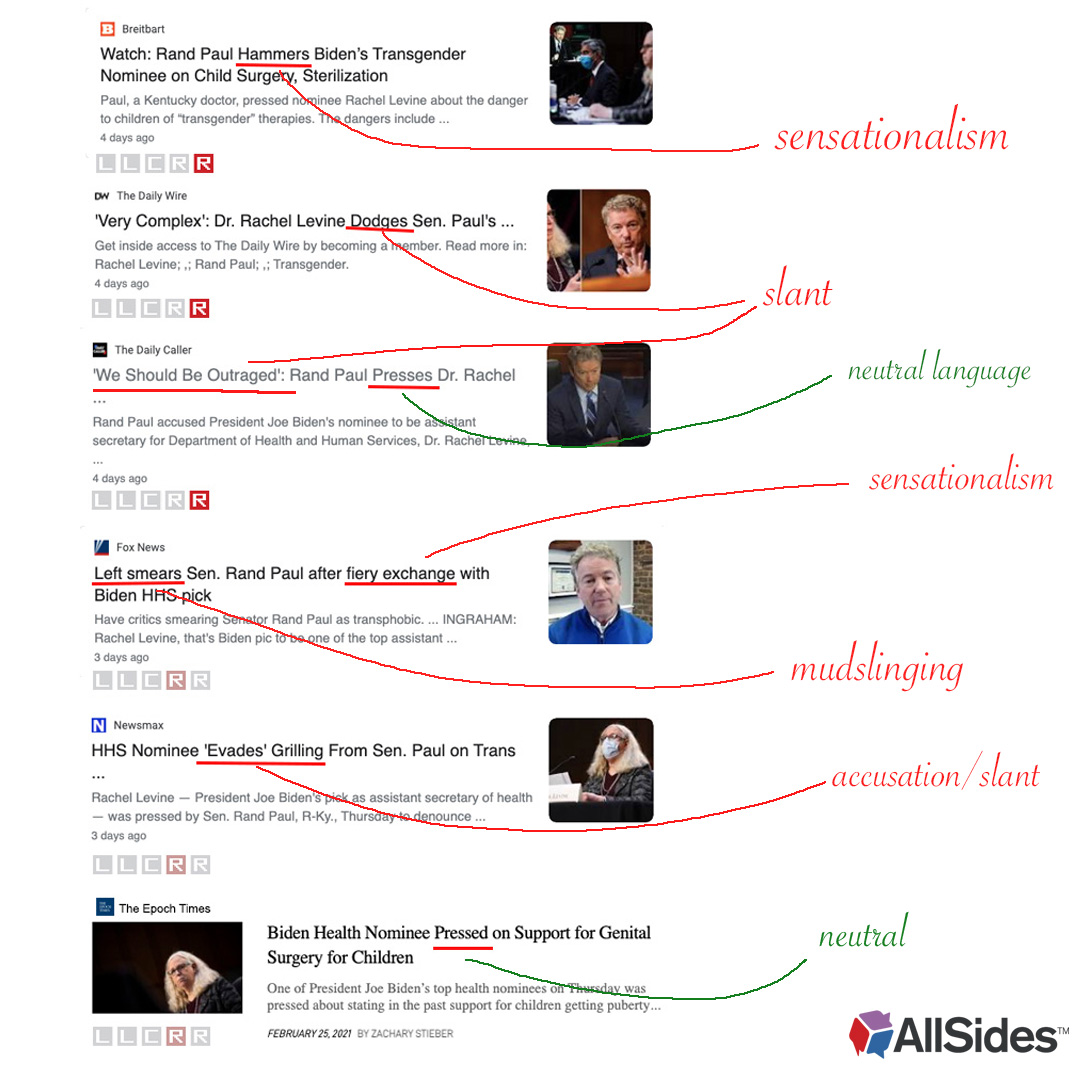 Some right-wing media outlets used toned-down descriptions of what Paul did, saying he “pressed” the nominee. This language is relatively neutral— to ask a question is to press for information. Yet others used sensationalist language, saying he “hammered” Levine or had a “fiery exchange” with her.

Others, such as Newsmax (Lean Right) and the Daily Wire (Right), focused on Paul’s accusation that Levine was dodging the question. This may be considered to be slant, which is when journalists highlight, play up or focus on one particular angle.

Fox News (Lean Right) also engaged in mudslinging back at the left, stating that they had “smeared” Paul. However, that particular piece could be said to clearly be an analysis piece, as it was a headline from The Ingraham Angle, an opinion-based talk show. The others were not labeled analysis nor opinion.

Both sides were sensationalist because sensationalism makes you click. When you see a headline that there was a “fiery exchange” or an “unhinged rant,” it piques your curiosity. Editors use these tactics to make sure you click on their content so they can earn ad revenue. But as media consumers, we have to be aware that the way things are characterized are often used for this purpose primarily — to get us to click — at the expense of accurately describing what happened.

We also have to understand that media outlets serve partisan agendas. That’s why they insult the other side or attempt to show them in a bad light with mudslinging. It’s democracy 101: everyone wants to sway your opinion in their favor, and this is done via the news media. Your beliefs ultimately affect who you donate to, which politicians and news outlets you support, how you vote — even what you buy. Shaping your beliefs is big business, both politically and economically!

How to Report More Neutrally

In my Google and DuckDuckGo searching, I found three non-inflammatory, relatively neutral headlines, from RealClearPolitics (Center), The Epoch Times (Lean Right) and Yahoo! News (Lean Left, but when you click the article, it’s actually a reprint from Fox News — Lean Right).

All of these get to the crux of what happened without mudslinging, sensationalism and spin. What are some other neutral ways we could have constructed this headline? Perhaps:

Paul to Levine: Should government or parents make decisions on child gender treatment?

Are these headlines longer? Yes. Do they more accurately describe what happened? I’d also say yes.

Although journalists are incentivized to inflame things to get clicks, media consumers deserve just the facts. Unfortunately, we typically get spin, subjectivity and mudslinging instead. Reading media across the political spectrum and comparing headlines can be a bulwark against this, as well as learning how to spot the types of media bias.