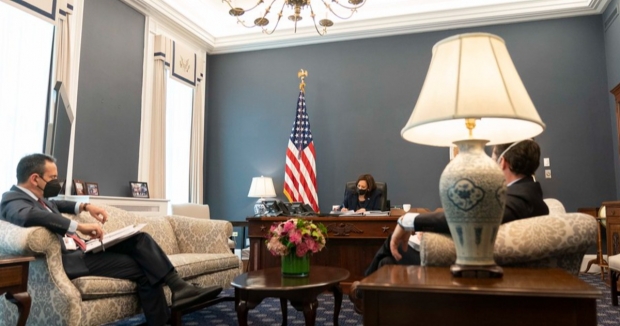 There are — as there almost always are —more than two sides to Vice President Kamala Harris’ management of her immigration assignment from President Joe Biden. But for the dedicated followers of biased media, it’s likely only one “reality” prevails.

As you’ll see from the headlines shown below, reports from left-rated media often tend to paint the assignment as a political challenge for Kamala, who they often frame as a target of criticism in the political world — especially online and from conservatives.

Coverage from right-rated sources often takes a different approach, often framing Harris’ conduct as poor, her management skills as inadequate and the southern border as in need of dire, dramatic action.

These consistently differing narratives on either side of the spectrum fuel online filter bubbles, in which consumers only see information that confirms their preexisting beliefs. Left- and right-rated media tend to have audiences that align with their bias, so it’s typical for those readers to see ideas and themes in the news that they already agree with.

Filter bubbles drive alternate online realities. By calling them out and acknowledging truths on both sides of the situation, we can begin to “burst” them and foster a more civil solution.

Here are the filter bubbles for the left and right on Kamala Harris and immigration, deconstructed for your reading convenience:

Criticism of Harris: Unfair, or Warranted?

If you mainly read left-rated news, you’ve probably seen these points about Harris trying to carefully navigate her immigration task:

“...but her interactions with foreign leaders have been positive…”

“...and meanwhile, she’s also the target of widespread criticism.”

NBC News was one of several outlets to cover a report from the women’s rights group Time’s Up!, published last October, about purportedly sexist and racist media coverage of Harris.

The report concluded that news reports about Harris’ “vice presidential nomination disproportionately focused on her race and gender,” and that roughly 25% of the coverage “incorporated at least one racist or sexist stereotype — most of which derived from the repetition of President Donald Trump’s ad hominem attacks on Harris.”

In general, left-rated media seem to give the impression that Harris is facing a challenging political situation head-on, while framing criticism of her as partisan.

Conversely, if you mainly read right-rated news, you’ve probably seen the following points about how Kamala’s immigration leadership is a failure:

“She’s not visiting the Mexico border, suggesting a lack of urgency on her part....”

“...plus, she can’t articulate her goals properly…”

“...and now, even her own party and constituents are turning on her.”

Some right-rated media outlets, especially NewsBusters (Right bias), have also criticized left and center-rated media outlets for purportedly soft coverage of Harris, accusing them of protecting her and putting a positive spin on her public appearances.

The image from right-rated outlets of Harris’ immigration management is clear: she’s failing, the situation is worsening, and the White House seems unable/unwilling to take necessary action.

Some Sources Breaking the Trend?

Again, there are more than two sides: outlets on left and right have sometimes addressed the other side of the common narratives you’d typically expect them to push.

An analysis from CNN (Left bias) on Monday began by describing a “fumble” and a “misstep” by Harris:

“Several allies and former aides to Vice President Kamala Harris had "flashbacks" last week as they watched her fumble a politically sensitive question during her first foreign trip, seeing the misstep as part of a broader pattern of messaging challenges that have dogged her since her presidential campaign.”

Meanwhile, some on the right say too much criticism is being directed at Harris when it should be more focused on Biden.

“If Ms. Harris has no good answer for the chaos at the border, that’s because the administration she serves hasn’t given her any good answers. And that’s on her boss.”

Before we completely pop the filter bubbles on Kamala Harris and her immigration assignment, let’s inspect them a bit more. What’s driving the divides in coverage?

On one hand, 19% of news coverage of the early Biden administration has been negative, while 62% was negative in Trump's early days as president, according to Pew Research Center (Center bias). Maybe there are just less negative stories to cover, or maybe journalists are asleep at the wheel.

After the Four Year War between the media and the Trump White House, it’s very possible that left-rated and mainstream journalists — either burnt out and unmotivated, or triumphant and willfully ignorant — are less adversarial now. This bias and/or laziness would inevitably trickle down to coverage of Harris, who, at least since being chosen as Biden’s VP, has seemingly benefitted from favorable (if not subdued) mainstream media attention.

On the other hand, it’s also possible that biased media are framing Harris’ role unfairly.

She’s not going to single-handedly solve the complex southern border crisis, nor was she assigned to; her real assignment was to lead migration-related diplomacy with Latin American nations.

“Pretty much everyone—reporters, members of Congress, advocates—gets confused about what the parameters of her role are,” notes Edward Issac-Dovere in The Atlantic (Lean Left bias). Possibly too eager to take aim at Harris, right-rated sources may be firing blindly.

There are relevant, valid points to acknowledge on both sides of this argument. But if you read in a filter bubble, you’ll only get part of the story. This is essentially a roadblock between you and an accurate understanding of the situation. So, how can you get around it?

When presented with a key fact about immigration or any other subject, you should assume there might be one that contradicts it. And if you don’t see it in the story you’re reading, go looking for it with our Balanced Search tool or on our Immigration page.

Remember that biased media outlets often fail to provide the whole picture. But in the short term, the solution starts with you reading beyond the first layer — which is often the thinnest.

Henry A. Brechter is the Managing Editor of allsides.com. He has a Center bias.