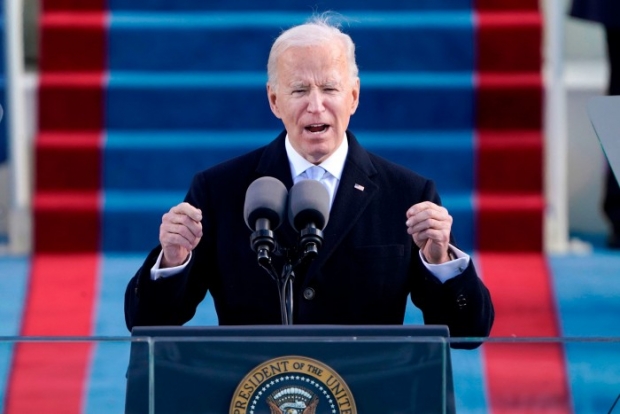 On Wednesday, Joe Biden was sworn in as the 46th President of the United States in Washington, D.C. by Chief Justice John Roberts. The ceremony was scaled back amid the COVID-19 pandemic, and more than 20,000 National Guard troops were stationed in the city in anticipation of possible political unrest. Shortly before Biden's oath, Kamala Harris received the vice presidential oath from Supreme Court Justice Sonia Sotomayor, making history as the first female vice president and the first vice president of South Asian and African American descent. In his first address as president, Biden expressed his hope for "an end to this uncivil war that pits red against blue."

In addition to the inauguration ceremony, coverage from across the political spectrum focused on pardons and commutations Donald Trump issued in his last hours as president, as well as Trump's farewell event on Wednesday morning. Many reports also concentrated on the executive actions Biden signed on his first day in office, and on Harris being the first woman elected as vice president. Left-rated outlets often painted Trump and his departure in a negative light; some right-rated sources framed Biden's executive actions as a "wave" meant to appease Democrats.

While there was media speculation about potential violence, the inauguration went forth without disruption. Elsewhere, there were signs of politicians reaching across party lines. 17 freshman Republican lawmakers wrote to Biden expressing their intent to "rise above the partisan fray"; and as the Senate is now split 50-50, Senate Majority Leader Chuck Schumer (D-N.Y.) is working with Minority Leader Mitch McConnell (R-Ky.) to ensure equal membership on committees and equal budgets for Republicans and Democrats.

On the Blog: Surveys suggest that the majority of Republican and Democrats share Martin Luther King Jr.'s value of nonviolence; and a recent Blind Bias Survey and extensive team reviews survey impacted two of our major source ratings: CNN and Fox News.

Other news and more from AllSides: The U.S. reported its 400,000th coronavirus-related death this week, as an independent panel faulted the World Health Organization and China for responding too slowly to the pandemic; Download the AllSides mobile app for balanced news on the go. Available for iOS and Android; and you can support our work and mission by becoming a sustaining member of AllSides. Sustaining memberships allow you to read AllSides ad-free.

"With some 17 executive actions ready for his signature, he plans to immediately plunge into the work of extracting the nation from myriad crises, including a pandemic that shows no signs of abating, a botched vaccine rollout, an economic downturn and deep divisions inflamed by former President Donald Trump. Biden and his family walked onto the White House grounds on their own, hours after Trump had left Washington, refusing to attend the swearing in of his successor."

"A little after noon on Wednesday, @WhiteHouse shared its first tweet under the Biden administration, to 1.6 million followers. “Today, the work begins,” it said. Then, just after 12:30 p.m., Mr. Biden issued his first tweet from the @POTUS account. “There is no time to waste when it comes to tackling the crises we face,” he wrote. “That’s why today, I am heading to the Oval Office to get right to work delivering bold action and immediate relief for American families.”"

"Biden did not mention former President Donald Trump by name throughout the speech, instead focusing on his faith that divisions between Americans can be healed. Biden also called on Americans to turn their full attention toward combating the coronavirus. “For those who did not support us, let me say this: Hear me out as we move forward. Take a measure of me and my heart,” Biden said."

"CNN was eager to celebrate President Trump leaving the White House on Wednesday morning and the hyper-partisan network’s news anchors and executives couldn’t resist offering their opinions about the outgoing commander-in-chief. Jake Tapper, who is billed as a straight news anchor despite regularly offering his thoughts, declared that Trump was "disgraceful" as he prepared to board Marine One and head to Joint Base Andrews."

"He will ask the Department of the Interior to review the boundaries and conditions of the Grand Staircase-Escalante, Bears Ears, Northeast Canyons and Seamounts Marine National Monuments. That order will also place a temporary moratorium on all oil and natural gas leasing activities in the Arctic National Wildlife Refuge...Biden also plans to revoke the Trump administration’s orders to exclude noncitizens from the census and apportionment of congressional representatives."

"U.S. allies and adversaries will also watch the new administration closely for plans with Iran. Former President Donald Trump withdrew the U.S. from the Iran nuclear deal, imposed sanctions on the country and carried out an attack that killed a top Iranian military leader. Iranian President Hassan Rouhani said he hopes Biden administration officials "sincerely return to the law and show their honesty in practice; we will also fulfill our own commitments," according to Iran's Press TV."