President Donald Trump left the White House for the last time as president on Wednesday morning, telling reporters, “I just want to say goodbye—but hopefully it’s not a long-term goodbye. We’ll see each other again.” Trump flew on Marine One to Joint Base Andrews, where he spoke to a gathering of his supporters, thanked his family, and wished the new administration “great luck and great success.” Trump then boarded Air Force One to fly to Mar-a-Lago in Palm Beach, Florida. While Trump did not attend President Joe Biden’s inauguration, as all but three of his predecessors had done, he did continue the tradition of leaving a note for the incoming president.

Reporting in some left-rated outlets, particularly CNN, described Trump’s departure in less favorable terms, describing him as a “pariah” and noting First Lady Melania Trump’s historically low approval rating. Coverage in some right-rated outlets took a more positive angle, pointing to a “booming economy” and the popularity among Republicans of some of Trump’s accomplishments. 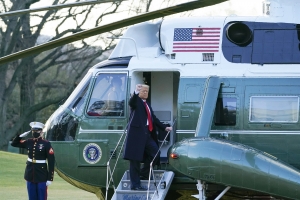 President Donald Trump arrived in Florida just before 11 a.m. on Wednesday, with an hour left in his presidency, as he opted to skip the swearing in and instead retreat to his residence on the coast.

Air Force One buzzed Mar-a-Lago shortly before landing. Trump departed Washington in the morning, delivering a send-off speech to supporters at Joint Base Andrews and then boarded Air Force One as president a final time. 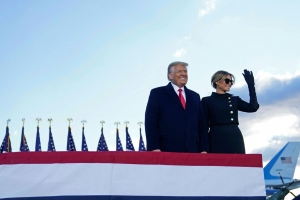 President Trump and his family took off on Air Force One at 9 a.m. on Wednesday morning for the final time en route to Florida.

The big picture: Trump's final hours as president were punctuated by his decisions to snub his successor's inauguration and grant pardons to many of his allies who have been swept up in corruption scandals.

Simultaneously, congressional leaders were en route to attend Catholic mass with Joe Biden, hours before he is sworn is as the 46th president of the United States.
A White House... 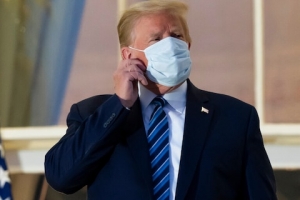 President Trump on Wednesday morning told supporters that "we will be back in some form" after he departed the White House for the final time as president, just hours ahead of the inauguration of President-elect Biden.

Trump made the comments at Joint Base Andrews as he was about to fly to Mar-a-Lago in Florida. Trump landed on Air Force One in Florida with about one hour left in his term.

As Trump walked to the podium in Joint Base Andrews, he was greeted by a 21-gun salute with...

The Manhattan District Attorney's Office has obtained former President Donald Trump's tax records, executing a subpoena for the long-sought documents after the...

In one morning, the Supreme Court looked to rid itself of the Trump era
ANALYSIS

Donald Trump took a drubbing at the Supreme Court on Monday, as the justices in a flurry of orders dealt critical blows to his efforts to shield his tax...

Biden is locking up migrant children. Will the world still care with Trump gone?
OPINION

This week, the Biden administration did the unthinkable. It reopened a Trump-era detention site for migrant children. The detention center, a reconverted camp...

In many ways, Merrick Garland’s Monday confirmation hearing for Attorney General was almost exactly what his 2016 hearing for the Supreme Court would have been...

Trump plans to use his CPAC speech as a 'show of force' to exert control over the GOP,...

Former President Donald Trump plans on using his upcoming speech at the Conservative Political Action Conference (CPAC) as a "show of force" to exert control...

Top Republicans are split on President Trump’s first post-presidential appearance at a key meeting of conservatives in Florida this week. “I don’t believe...