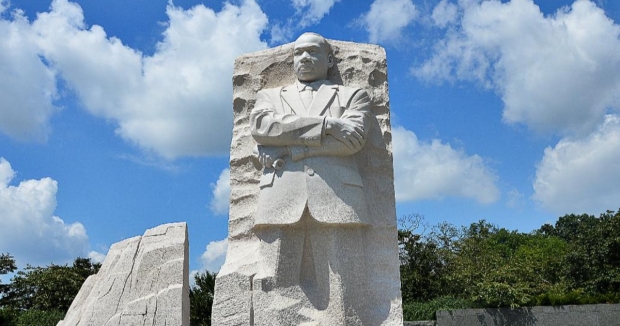 Monday is Martin Luther King, Jr. Day. Of his many profound legacies, one is his longstanding commitment to political nonviolence to achieve social change.

That goal to avoid political violence may seem threatened in America today, but surveys suggest Americans still side with nonviolent political actions.

The Martin Luther King, Jr. Research and Education Institute at Stanford University provides a detailed encyclopedia of his life, including his commitment to nonviolence. King’s journey toward nonviolence began as a freshman at Morehouse University. He then became more deeply acquainted with the work of Mohandas Gandhi while in seminary. He first used nonviolent practices during the 1955 Montgomery Bus Boycott, and he continued using nonviolence throughout the Civil Rights Movement.

Some other figures advocated for more violent means of achieving racial equality. Yet King’s commitment to nonviolence remained strong until the end.

In our present day, Americans still oppose political violence, though some trends are concerning.

The Washington Post and ABC released a poll this past Friday showing that nearly 90% of Americans – including 80% of Republicans – opposed the breach of the Capitol. This result nearly exactly matches a survey from PBS Newshour released a week earlier.

Before the election, these researchers found that more than half of Democrats and Republicans believed there would be no justification for violence if the other side won. Thus, a majority in both parties are aligned with King in favor of nonviolence.

Only a minority of 15-20% of each party thought there would be “a lot” or a “great deal” of justification for violence, a decided minority.

Yet as the authors noted, justification of political violence is also higher on the political extremes among those who consider themselves “very liberal” or “very conservative.” They also found a notable worsening in attitudes since 2017. Between 2017 and 2019, the share of Americans reporting they would feel at least “a little” justified with political violence against the other side rose by nine percentage points.

Finally, a couple of the authors found that violent events tend to increase public approval of more violence, which would be a troubling outcome of the Capitol breach.

Realizing King’s vision of a nonviolent political future will not be easy, but there are key levers. For instance, the researchers focused on lethal mass partisanship note the importance of leadership at all levels strongly renouncing violence among their supporters.

And while both left-rated and right-rated sources are reporting questions about whether a few Republican members of Congress coordinated in some way with protest organizers before the breach, no member of Congress has explicitly supported the Capitol breach since it occurred on January 6.

Yet nonviolence is not inevitable. Dr. King had to advocate for it tirelessly during the Civil Rights Movement. Americans today must make it clear that nonviolence remains the only acceptable means of political interaction.