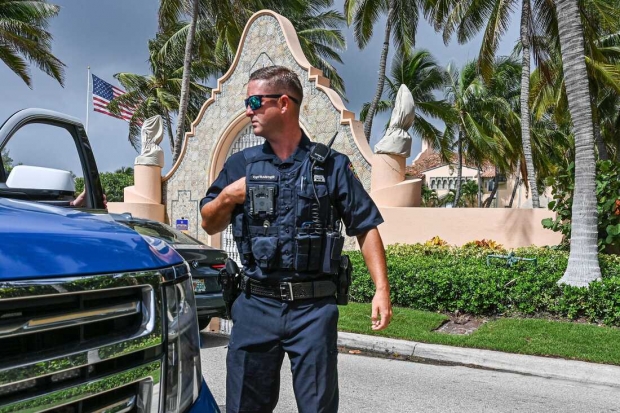 Did the FBI “raid” former President Donald Trump’s Mar-a-Lago estate in Florida? Or did they “search” it?

In general terms, both words can be used to accurately describe what happened when the FBI executed a search warrant and seized documents at Trump’s home in early August. But differences and inconsistencies in how news sources use the terms may reflect media bias by word choice.

While many outlets across the political spectrum use the word “raid” in their coverage or used the terms “raid” and “search” interchangeably, other major sources, like the Associated Press (Lean Left bias) and Wall Street Journal (Center bias), strictly describe the event as a “search,” while using the word "raid" to describe other similar FBI activities. For some, this raises questions of possible bias against Trump.

Inconsistencies in Use of “Search” vs “Raid”

The Associated Press’s coverage of the FBI’s trip to Mar-a-Lago strictly refers to it as a “search.” The word “raid” is only seen either in quotation marks or as part of a quote from someone speaking about the event.

Notably, this breaks from AP’s coverage of other FBI raids. One June 23, an AP article used both “raid” and “search” to describe federal agents executing a search warrant at the home of a former top Justice Department official.

In April 2021, federal agents conducted a similar search at the office of former Trump counsel Rudy Giuliani, when they arrived unannounced and seized potential criminal evidence. In that case, AP’s headlines and articles used the word “raid” throughout.

Other AP articles on the FBI executing search warrants relating to Jan. 6 rioters, the NYPD union, and a Republican lawmaker in Tennessee all use the word “raid.”

It’s unclear what, if any, differences between the Trump raid and the Giuliani raid may have led the news outlets to describe them with different words.

An email to AllSides from AP Standards Editor John Daniszewski said that AP feels "that search is a more appropriate and accurate word based on what we know about the turn of events at Mar-a-Lago," and that this "was not a sudden invasion but the culmination of several months of back and forth over the records question."

Some would argue that news outlets made a deliberate political choice of words to make the “search” sound less dramatic, when in reality it was a significant and unprecedented intrusion on a former president’s private property. Others might argue that “raid” is overly dramatic since federal agents didn’t break in or try to arrest anyone, but rather just searched for and seized documents.

The inconsistency isn’t limited to news outlets. Wikipedia’s article titled “FBI search of Mar-a-Lago” also refers to it as a raid later in the text. Atop that page as of this writing, there was a message saying that “A request that this article title be changed is under discussion.” And Wikipedia editors themselves are in disagreement about whether to call it a “raid” or “search” in the page’s title.

Wikipedia’s article on police raids defines them as “an unexpected visit by police or other law-enforcement officers with the aim of using the element of surprise in order to seize evidence or arrest suspects.” According to the Washington Post (Lean Left bias) and other sources, the FBI’s appearance at Mar-a-Lago on Aug. 8 was unannounced and “apparently came as a surprise to the Secret Service agents tasked with protecting the former president’s residence.”

What’s the Difference Between an FBI Raid and a Search?

On its own, “raid” seems a much more dramatic word than “search.” But they’re often used to mean similar things when it comes to FBI investigations and the execution of search warrants.

Merriam-Webster published an article the same day of the Mar-a-Lago search breaking down the difference. “Is there a simple answer about which word best describes this event? Not really,” begins the breakdown.

The article highlights how some people use “raid” broadly to mean “a sudden invasion by officers of the law.” It then explains that others see a clear distinction between the two words. To them, “a search is what happens when officers are acting on a search warrant, and a raid is a sudden forceful incursion made when surprise is necessary to apprehend someone.”

This definition suggests that the term “search” is more appropriate in this case since Trump lawyers were present and were not surprised by a sudden forceful incursion. On the other hand, the FBI’s entrance is seen by many as a “sudden invasion” since it was unannounced and unprecedented.

Merriam-Webster’s article concludes by saying that “one’s feelings about the F.B.I. taking things from Trump’s residence may well influence which word one chooses to use to describe it.”

An article from The Blanch Law Firm, a criminal justice-focused firm in New York City, defines an FBI raid as “a search of the residence, office, or otherwise private area of any person that is believed to have information relating to a crime and could result in the seizure of anything to be considered ‘evidence.’”

Teri Kanefield, a writer for Washington Post (Lean Left bias), argued that the “connotations of ‘raid’ suggest what Trump wants to suggest: a siege; his home was ‘occupied’; and law enforcement harassing him,” which she said was not the case. Glenn Kirschner, an MSNBC (Left bias) writer, said “it wasn’t a raid. It was a court-authorized search warrant. As for it being ‘unannounced,’ every search warrant is unannounced, so the occupants don’t have an opportunity to move or destroy evidence.”

Throughout this article and the rest of our original content on this story, AllSides will use the terms “raid” and “search” interchangeably when describing the FBI’s execution of its search warrant at Mar-a-Lago in an effort to minimize word choice bias and present readers with more perspectives. We based this decision on the observation that neither word appears to be defined clearly enough to use exclusively in the case of this story.

Many Sources on Left, Center and Right Use Both “Raid” and “Search”

Right-rated outlets such as Fox News (Right bias) and The Epoch Times (Lean Right bias) tend to use the word “raid” more in their Mar-a-Lago coverage, but many other reports and analyses from news sources across the political spectrum used both “raid” and “search,” often switching back and forth within the same article. This suggests that distinguishing between the two matters less to many journalists.

Some left- and center-rated outlets used “raid” in their headlines:

Vox (Left bias): What we know, and what we don’t know, about the FBI’s raid on Donald Trump

New Yorker (Left bias): What the F.B.I.’s Raid of Mar-a-Lago Could Mean for Trump

…and some right-rated sources used “search” in their headlines.

Some sources even used the words interchangeably between different headlines and articles:

So the distinction clearly doesn’t matter to many news sources. But what’s behind the decisions of those news sources that use the terms very selectively?

It’s possible that some news sources are making a conscious decision to avoid using the word “raid” since that’s how Trump and many other conservatives refer to the event.

With the right leaning heavily into the argument that the raid represented a political attack, and with some extremists threatening violence against the FBI, a journalist may decide to stop using the more dramatic word – “raid” – when they may have used it in other cases not involving Trump. In their minds, this might act to depolarize the situation.

Whether that’s biased is a wholly subjective debate. Those who say it is would argue that journalists were trying to minimize the event because they don’t like Trump.

News sources should be clear about why they’re using certain words and not others, especially with major stories like this. Otherwise, they risk feeding into mass confusion, polarization, and the perception that their editorial choices seek to serve political sides rather than objectively report on the news.

See the latest balanced news and more on the Mar-a-Lago raid.