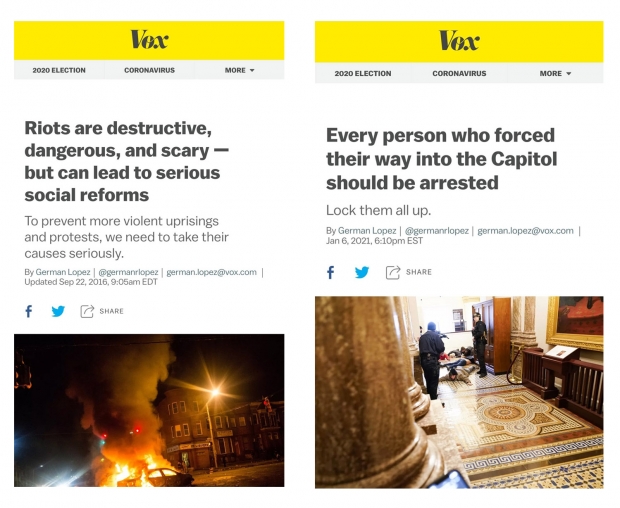 A protest at the Capitol turned chaotic and violent Wednesday when protesters stormed into the building and one woman was shot and killed by Capitol police; a cop died from his injuries and three others died from “medical emergencies." The event illustrated yet again how the media treats coverage of protesters and rioters differently based on whether or not they agree with their cause.

Wednesday’s events — which you can get a recap of here — were certainly chaotic, outrageous and frankly, saddening. But they also showed how left-wing media framed Capitol Hill protesters much less sympathetically than they framed other violent protesters or those who swarmed federal buildings in the past.

Consider the coverage of those who occupied a Senate building to protest Supreme Court Justice Brett Kavanaugh’s appointment in 2018 and those who participated in violent riots against police actions this summer, in which police precincts were set on fire, city blocks were looted and torched, and people were beaten and killed in the streets. While the events are not all exactly the same, their similarities and the differences in how they were viewed are important to note.

Differences in media coverage are the result of very different beliefs about what is true, who is right, and what is considered a justified act of civil unrest. Violence or destruction should be reported on the same way, regardless of the rightness or wrongness of the reasons behind the unrest. Whether it was justified or not should be independent of how media reports on protest and violence. However, it appears that often the reporter’s opinion of the validity of the underlying reasons — or perhaps of the importance of the people or property in harm's way — greatly impacts their description of the violence, protesters, or lack of violence.

Here are some of examples of how media outlets framed protesters differently depending on whether they agreed with the underlying beliefs of those taking action:

In 2018, when protesters stormed and occupied the Hart Senate Office Building atrium on Capitol Hill to try to prevent Brett Kavanaugh’s nomination to the Supreme Court, ABC News said the protesters “gathered" and noted they were charged with “unlawful demonstration." This week, however, ABC wrote that Capitol Hill protesters were a “mob" who “broke into the Capitol" via an “invasion," quoting DC Mayor Muriel Bowser as saying it was “textbook terrorism":

"Whose courts? Our courts!"

ABC also took a different approach when covering this summer’s Portland riots. ABC never used the word “violent" in coverage we reviewed, even though it described police officers being punched and pelted with rocks, but it did use the word “violent" when describing Wednesday’s events on Capitol Hill. It classifies Capitol Hill protesters as an “angry mob," but Portland rioters as engaging in a “scuffle" (click to enlarge image):

In an article about a wave of riots that occurred in numerous U.S. cities after the death of George Floyd this summer, AP characterized the events as “tense protests" and a “night of unrest," even while also describing violence at them — noting “police cars set ablaze and reports of injuries mounting on all sides." The word “violent" and “mob" is never used, though it did say the protests “raged."

AP used much stronger language to describe the protesters who stormed the Capitol Wednesday — “violent mob," “one of the most jarring scenes ever," “rioters," “stunning attempt to overturn the nation’s election."

In Sept. 2016, Vox wrote about riots that occurred following a police shooting in North Carolina, seeming to justify them. Vox wrote the headline: “Riots are destructive, dangerous, and scary — but can lead to serious social reforms." Yet this week, Vox was not so sympathetic toward protesters opposed to alleged election rigging, writing: “Every person who forced their way into the Capitol should be arrested". 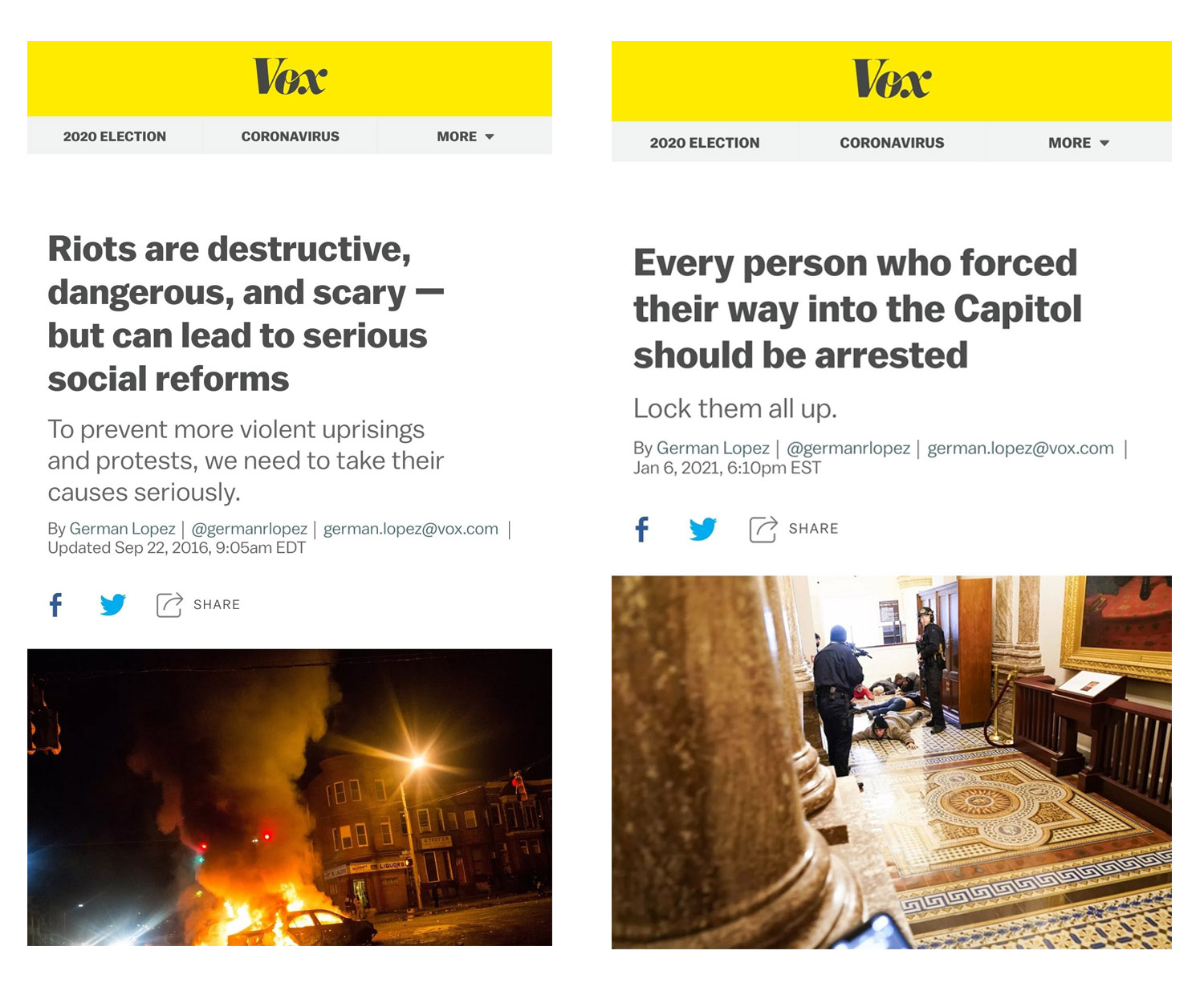 The first piece said the question “Why are people destroying their own communities in such senseless violence? …. misses the point." It continued:

This sentiment, experts previously told me, underplays the real anger behind riots and urban uprisings. "People participate in this type of event for a real reason," Darnell Hunt, a UCLA professor who's studied the 1992 Rodney King riots in Los Angeles, said. "It's not just people taking advantage. It's not just anger and frustration at the immediate or proximate cause. It's always some underlying issues.

The second piece, however, took a much different tone:

If America wants to prevent another event like Wednesday’s storming of the Capitol in Washington, DC, officials should make all efforts possible to arrest and prosecute every single person involved in the violent protests — events that some branded as an attempted coup by President Donald Trump and his supporters.

This is not simply a matter of vengeance. It’s a real-world example of a common concept in criminological theory focusing on the best way to use punishment to deter future crimes.

Like the other outlets, MSNBC took a very different tone with those who stormed Capitol Hill Wednesday. These protesters didn’t “take over," instead they were a “mob of Trump supporters who stormed the U.S. Capitol." MSNBC also quoted a retired U.S. Navy admiral calling it an “insurrection":

Fmr. Adm. James Stavridis says Wednesday's chaos at the U.S. Capitol was an insurrection against the U.S. government.

"For me, the saddest moment was watching them attempt to take down the flag of the U.S., to put up a Trump sign."https://t.co/fPMAnsda7O— MSNBC (@MSNBC) January 7, 2021

What about media outlets on the right? They were more balanced, with right-rated media outlets using strong terms for both summer events and Wednesday’s Capitol Hill storming. Some outlets, like The Daily Wire, used the term “riot" to refer to both summer BLM protests and yesterday’s events; in a separate article, it also called Capitol Hill protesters a “pro-Trump mob":

Newsmax was also more balanced, though it should be noted that Newsmax runs pieces that are not original but are re-posted from various wire services and media outlets such as Reuters and Bloomberg. Newsmax chose to run both original and third-party articles that characterized the summer’s events as “riots" “protests," “unrest," “scuffles," and “clashes"; on Thursday, its homepage included numerous articles that prominently called Wednesday’s Capitol Hill events “riots".

Breitbart used the word "riot" in relation to summer unrest when police themselves had declared something a riot; see examples here and here. For Wednesday's events, the language was perhaps a bit less strong, noting Trump supporters "stormed" the Capitol and that they "swarmed Capitol Hill and entered the building," "breaking down doors to enter."

In 2018, Reuters wrote: "Activists rally inside the Senate Hart Office Building during a protest in opposition to Supreme Court nominee Brett Kavanaugh." The tone was much different Thursday — activists didn't "rally," Trump supporters "stormed the U.S. Capitol in a harrowing assault on American democracy."

Many people believe that summer riots, anti-Kavanaugh protests, and the Capitol Hill storming were very different from each other and deserving of different coverage and word choice, and would say it was wrong to suggest that they are at all similar in any way. Others believe that summer riots and anti-Kavanaugh protests were not justified, yet the Capitol Hill storming was. Still others would say that rioting, violent protest and occupation is never appropriate or justifiable, and all acts of rioting and occupations should be described in the same strong terms.

The bottom line is, differences in media coverage are the result of very different beliefs about what is true, who is right, and what is a justified act of civil unrest. In protest events over the last 3 years, media used softer or harder language depending on who the violence and occupations were coming from:

“Storming" versus “taking over."

We saw similar bias in coverage of protests earlier this year, including in the summer when the media painted Donald Trump rallies as coronavirus “superspreader" events, but did not mention the virus at all when reporting on protests against police brutality, and in coverage of London and Portland riots.

How Should These Events Be Covered?

When is it appropriate for the news media to support or condemn lawlessness and violence? Are media outlets meant to be moral arbiters? We’d think that civil societies and their media outlets should always condemn and vilify lawlessness and destruction across the board in the strongest terms, no matter who it’s from or what they’re angry about. But it’s not always so simple, and bias is always clear. What if these were pro-freedom protests in say, North Korea — would we have the same attitude, or find violent protest tactics justified in light of severe state oppression?

At the very least, events should be accurately described, no matter what side the violence and destruction is coming from. Yet we often disagree wildly on what an accurate description is, and it’s often informed by which side we agree with.

This is essentially media bias 101: slant. Reporters will often include justifications and descriptions of the grievances that rioters have when they agree with those grievances, but will ignore or downplay grievances when they don’t agree with them.

Journalists that agree police brutality is an epidemic and that America has a problem with racism will highlight evidence to back that up and will use softer language to describe destruction and chaos that seeks to make that cause heard. On the other hand, that same journalist may disagree that widespread election fraud happened or that an unfair election will tip the U.S. toward one-party rule, so they use stronger terms and admonish any unrest that seeks to make that cause heard or demand change.

This article isn’t to say who’s right or wrong, though we all have our opinions. This is simply to point out that slant and spin often are revealed in word choice. The media often acts more like a public relations arm for their side, not an objective viewer. This is why we see so much imbalance when it comes to reporting on rioting and violence, and we must read widely to get a broader view.