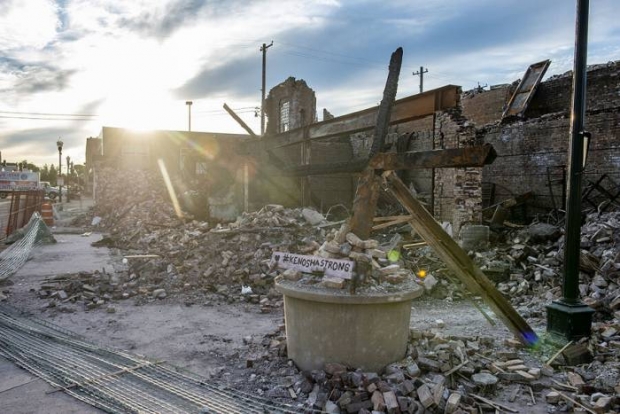 Kenosha, Wisconsin became the newest site of anti-police brutality protests and violent rioting after Jacob Blake was shot by police on Aug. 23. In the days following Blake's shooting, 17-year-old Kyle Rittenhouse was arrested as a suspect in a shooting that killed two and wounded one. President Donald Trump visited Kenosha Tuesday; Joe Biden plans to visit the city alongside Blake's family on Thursday.

Coverage from some right outlets painted Trump's Kenosha visit as a look at "riot damage"; some reports from left-rated sources framed the visit as an effort to secure an important battleground state. Reports from left- and right-rated outlets similarly framed Biden's planned visit as a test to see if he can accomplish the "unity" he's recently campaigned on. Left-rated voices have tended to blame Trump and police for the violence, while many right-rated voices have blamed Democratic leaders.

On the Blog: Many outlets included, emphasized or omitted details in their coverage of the Rittenhouse shooting, often in line with their media bias rating; and AllSides found that media outlets like the Associated Press sometimes mix subjectivity into news articles

More from AllSides: AllSides is committed to helping students think critically in a polarized media and political landscape. Check out our list of remote learning resources; AllSides created a Facts and Fact Checking portal, where you can see the latest fact checks on a variety of topics and issues. You can also now support our work and mission by becoming a sustaining member of AllSides. Sustaining memberships allow you to read AllSides ad-free.

The thin blue line between violent, pro-Trump militias and police

"The events in Kenosha are the latest in a long line of cases in which self-styled vigilantes have gathered under the banner of the “thin blue line” — a flag and movement devoted to the defense of law enforcement and the president — and engaged in violence with counterprotesters while police stood back. Days before the killings in a Wisconsin, a so-called Back the Blue rally in Gilbert, Arizona, saw armed pro-police demonstrators beating counterprotesters while law enforcement looked on."

"It’s weird enough that a Republican party that campaigned for so long on the war on terrorism finds it so hard to see homegrown terrorists in places like Kenosha...But the weirdest thing in Biden’s America is that Donald Trump can only echo Joe Biden. One of them said this week, “I know most cops are good and decent people. I know the risk they take every day with their lives.” The other said: “The vast and overwhelming majority of police officers are honorable, courageous, and devoted public servants.” Which candidate hates law enforcement again?"

"Mr. Blake’s shooting, the three nights of burning and looting that followed, and a white teenager’s fatal shooting of two aggressive protesters have thrust this Midwestern city into the national spotlight. President Donald Trump surveyed the damage and met with law enforcement officials on a visit today, during which supporters and protesters engaged in shouting matches along the presidential motorcade’s route. As pundits and officials across the political spectrum turn Kenosha into a rallying cry for racial justice or law and order – or both – residents offer a more nuanced view."

Is it possible to rid police officers of bias?

"How implicit racial bias factors into the decisions taken by officers when they choose to use deadly force is still being researched. Some simulations have found that police officers are more likely to mistakenly shoot unarmed black people, while others have shown that officers are more hesitant to shoot armed black suspects than armed white suspects."

Steve Cortes for The Dispatch

Liberal Media Alternate Between Denying and Excusing Rioters and Looters

"In May, Northwestern University journalism professor Steven Thrasher wrote for Slate that destruction of property was a “reasonable response to the crisis of policing.” That may seem extreme enough, but now one writer has gone down the path of a full-blown defense of looting. Vicky Osterweil, a trans woman described as a “writer, editor, and agitator, and a regular contributor to The New Inquiry,” recently wrote a book titled “In Defense of Looting: A Riotous History of Uncivil Actions.” The book has a crowbar on the cover."