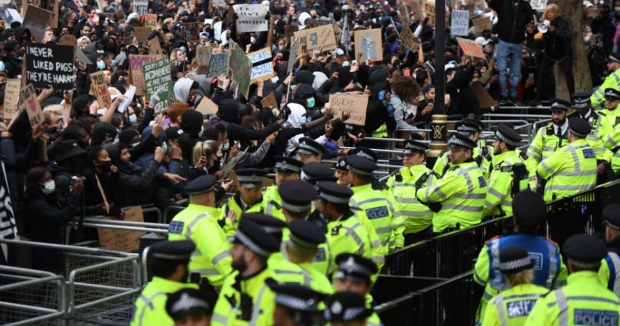 After protests and riots erupted in London over the weekend, seemingly inspired by similar gatherings in the U.S. over alleged racism in policing, some Twitter users pointed out apparent media bias in a BBC headline. 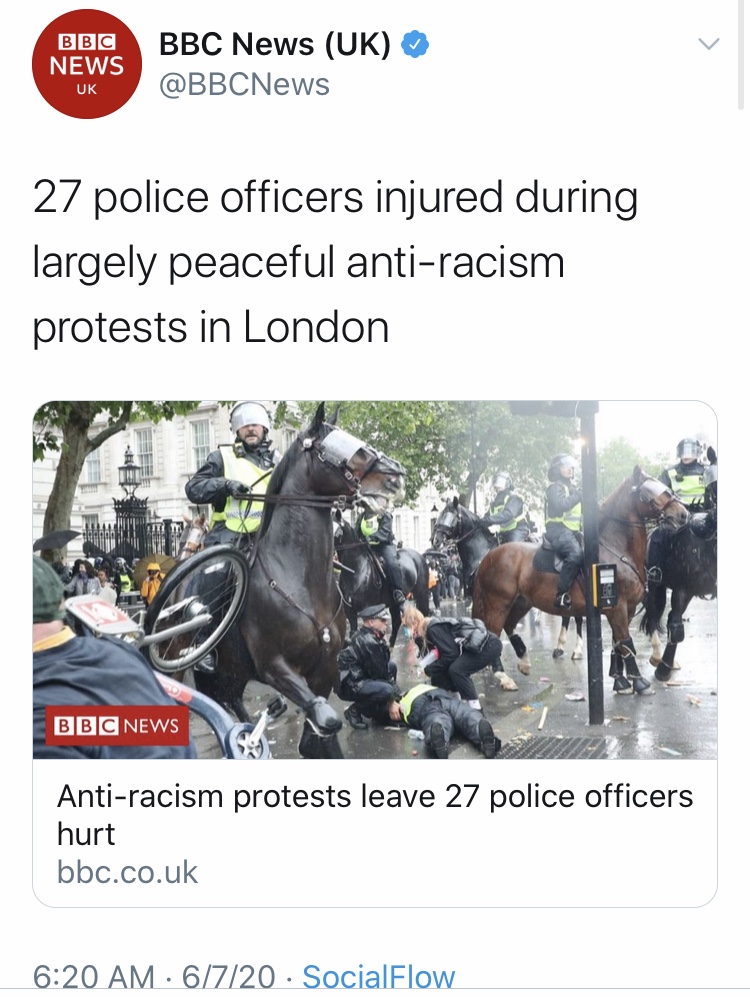 The tweet led many on Twitter to point out the apparent contradiction and flawed logic, a type of media bias in which faulty reasoning is given to misrepresent a situation or lead the reader to arrive at conclusions that are not justified by the given evidence. “Largely peaceful,” the critics said, is not backed up by evidence.

Some videos show London police retreating while being pelted with objects, including bottles and traffic cones. Others show police using batons to beat back unruly crowds, and protesters shoving bikes and other objects at police horses. To fight the characterization of the protests as “largely peaceful,”some users on social media shared photos of bloodied police officers — including a female officer who was thrown from her horse after someone allegedly threw a brick at her and is now suffering from a collapsed lung and shattered ribs — as well as unruly crowds and a man attempting to light fire to British flags. Others pointed to reports that 49, not 27, police officers were injured Sunday in London.

It could be that only the most violent videos get shared widely on social media, due to negativity bias. There were indeed videos to bolster the view that the events were largely peaceful: some videos show a calmer crowd, with protesters largely just standing around. Some shared videos of protesters dancing to bolster their opinion that the BBC’s characterization is correct.

Of course, whether or not protests and riots were “largely peaceful” is inherently a subjective call. If we get outside our filter bubbles, we can see the full picture: at least 27 police injured, some seriously, officers chased/mobbed, protesters pelting police and horses with objects, unruly crowds, people dancing, and people standing around. The evidence seems to show this was not a largely peaceful event. If only one or two were injured, and no objects thrown, "largely peaceful" would be correct. But media outlets sometimes employed slant, a type of media bias, to conceal the true picture.

For example, CNN repeatedly stated that a police horse that ran through the crowds simply bolted, while failing to report what may have caused it to do so — it was allegedly spooked by protesters throwing objects at it. BBC also drew criticism for stating the police officer “knocked herself off her horse.”

The BBC’s reporting and characterization of events as “largely peaceful” led many online critics to satirize the headline, borrowing the same logic and crafting faux, exaggerated “headlines” of other events:

“Titanic sinks after striking an iceberg during largely peaceful travel over the North Atlantic Ocean,” user Ban the BBC tweeted.

“Largely peaceful” is a subjective judgement. My personal opinion is that BBC is engaging in flawed logic by characterizing the event as largely peaceful. If you choose to focus only on the folks dancing and the members of the crowd who did not throw objects, and you believe 27 to 49 injuries aren’t so much considering the size of the crowd, that is a perspective, but it is a one-sided view that doesn’t take all the documented evidence into account. “Largely peaceful” doesn’t get across the fact that there was plenty of violence documented at this event.

This debate has been raging in the U.S., too, as journalists characterize recent gatherings as peaceful, while others insist they are largely violent or run by extremist groups. It’s a great reminder that we should always get multiple views across the political spectrum in order to reveal one-sided bias, know the facts, and think for ourselves.

This piece was reviewed by Managing Editor Henry Brechter, who has a Center bias, and CEO and Co-Founder John Gable, who has a Lean Right bias. 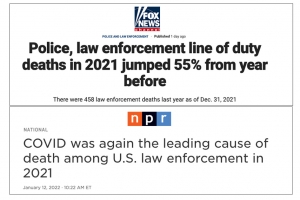 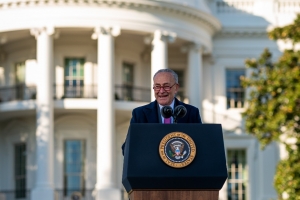