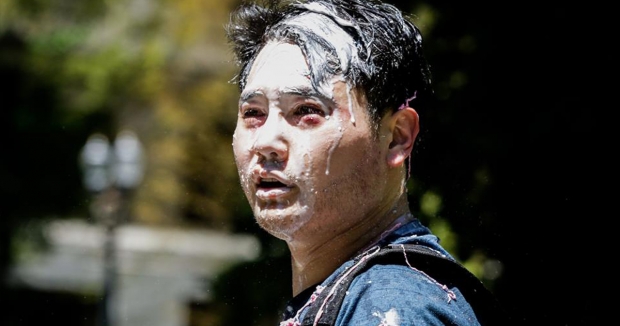 Media reports surrounding a Portland rally in which the presence of far-right and far-left groups resulted in violence — including the beating of a journalist — have much to reveal about media bias.

A video Oregonian reporter Jim Ryan posted to Twitter during the demonstration on Saturday showed members of the far-left group Antifa beating Quillette editor and photojournalist Andy Ngo, who often covers Antifa’s activities. Ngo, whom AllSides gives a media bias rating of Center, spent the night in the hospital after suffering a brain bleed, according to The Wall Street Journal.

The event led to a notable discrepancy in media coverage on the left and right, as well as polarized views on what took place.

A clear discrepancy was apparent in the media coverage of the event. At the time of this writing (7:49 pm EST on July 1), right-leaning media outlets Fox News, Washington Examiner, Reason, National Review, TheBlaze and Breitbart all had stories about the rally and the beating of Ngo featured on their homepages.

Left-leaning outlets Vox, The New York Times, The Washington Post, NBC, Politico and CNN did not have any coverage of the event featured on their homepages.

Center outlets USA Today, NPR online news and Christian Science Monitor did not feature coverage of the event on their homepages. Center outlet The Wall Street Journal did, but it was a piece from its Editorial Board, which AllSides rates separately as Lean Right.

Along with a discrepancy in media coverage, there were also marked differences in perspectives surrounding the events.

Many of those on the Left contend that Ngo is not really a reporter, but is a fascist or a fascist sympathizer, and that his beating was anticipated. Some, like Human Rights Campaign Press Secretary Charlotte Clymer, said that Ngo provoked the attack for attention or to boost his career.

"Andy Ngo intentionally provokes people on the left to drive his content. Being attacked today on video taken by an actual journalist (because Ngo is definitely not) is the greatest thing that could have happened to his career.

Violence is completely wrong, and I find it sad and weak to allow a sniveling weasel like Andy Ngo to get under one's skin like this, but I'm also not going to pretend that this wasn't Ngo's goal from the start.”

“If you show support for fascists over the course of many months while pretending to be a journalist and then get roughed up by anti-fascist activists after filming them, I’d call that predictable. That’s what happens when fascists come into contact with anti-fascists."

Andy Campbell, writing in HuffPost, said journalists like Ngo should expect violence at rallies like the one that took place Saturday because they are “specifically organized for the purpose of violence.” He also said outlets like Quillette are “determined to connect anti-fascists to violence,” so they instigate and then blame the far left.

“HuffPost has reported on how far-right extremists who organize [the rallies] meticulously plan to attack their ideological opponents and then claim victimhood when the dust settles.

It was a similar scene in Portland last August: Proud Boys and their allies in a punch-happy group called Patriot Prayer invited anti-fascist counterprotesters to meet them at the edge of the Willamette River to fight, under the guise of a “freedom” and “free speech” rally downtown. That arrangement played out as it regularly does ― with blood. Protesters punched Proud Boys in the face, antifa threw rocks and water bottles at police, Proud Boys sprayed antifa with bear mace, and officers put a counterprotester in the hospital, a tear gas canister lodged in his skull.”

CNN chief media correspondent Brian Stelter broke with most on the left to roundly condemn the attack, tweeting:

"Disturbing. Attacking a messenger shows weakness, not strength. Hopefully the authorities will get to the bottom of this."

On the air, Stelter said that the violence was "unacceptable, period," and that "it's important that everyone make that clear, even left-wing critics who don't like [Ngo]."

Meanwhile, voices on the right condemned the violence, saying reporters have a right to attend and document public events without threat of harm. The right criticized left-leaning media outlets and progressive groups, saying they failed to denounce the violence against Ngo, who is gay.

U.S. Ambassador to Germany Richard Grenell appeared on Fox News to condemn the silence of LGBTQ groups, and said that HRC spokesperson Clymer “tried to change it around to say Andy deserved this.”

Columnist Brad Polumbo expressed similar criticism about what he calls a “muted response,” writing at the Washington Examiner:

“A few prominent progressive journalists, such as CNN’s Brian Stelter, put out respectable statements condemning this assault, although he only spent about a minute on the subject. But others made excuses, ignored, or even justified the attack on Ngo. For instance, liberal journalist C.J. Werleman responded to the attack by calling Ngo an islamophobe and a party to white supremacy. (Ngo is Asian.) Huffington Post reporter Christopher Mathias called Ngo a “f--king snowflake” and feminist journalism professor Talia Levin, who was fired from her last journalism job for defaming a firefighter, mocked him in a since-deleted tweet as well.

“As of this writing, I can find no statement of any kind condemning the attack by HRC, HRC president Chad Griffin, fellow gay rights group GLAAD, gay media websites like The Advocate and Out Magazine, or Democratic presidential candidate Pete Buttigieg.”

The right also says Ngo is not a fascist nor a fascist sympathizer. They say his work reflects objective, center-right reporting, and that if he were on the left, prominent figures on the left would have widely condemned the violence against him.

Tiana Lowe writes at the Examiner:

“Watch any of Ngo's videos and just try to find an Alex Jones style stunt of him screaming in bystanders faces. You won't find it. The soft-spoken Quillette editor does what local news reporters are supposed to do: objectively document public events of community interest. If thugs willfully parading and pillaging the streets of Portland don't want to be caught doing so, they can stop at any time. His offense is bringing transparency to the situation.”

Journalist C.K Bouferrache, writing at The Federalist, said they were with Ngo at the rally, and that Antifa provoked Ngo — not the other way around.

"Where are the voices condemning the lawlessness and violence? If this violence had been directed at Antifa, there would have been an immediate call for an independent, outside investigation. This is a perfect example of Portland politics at work and why our great City is now under fire in the national news.

It's our job to ensure that our community can peacefully protest without fear of violence but right now our hands are tied.”

Far-Right, But Not Far-Left: Media Bias Revealed In Terms Journalists Use

Antifa does indeed stand for “anti-fascist,” but many of those on the right have accused antifa of being fascists themselves, and say referring to the group as anti-fascist is misnomer or doublespeak. They say journalists using the term “anti-fascist organization” instead of “far-left organization” give Antifa more credibility than is due, downplaying what they see as violent, extremist ideologies and tactics.

Some of those on the far left, including Antifa, believe it is okay to punch people perceived to be on the far right. "Punch Nazis" became a meme in late 2017 after a man punched far-right activist Richard Spencer in the face after the inauguration of Donald Trump in Washington, DC. The question, “Is it okay to punch a Nazi?” then circulated the internet.

There is a deep divide in American politics that is driving these volatile, violent situations and hampering our ability to handle our disagreements with civility. As Americans move farther away from the center and have less overlap in their political opinions, differences in how the left and right perceive extremist ideologies becomes apparent in how the media reports on politically charged events — or whether they report on them at all.

AllSides has written before about how political polarization and media bias leads to violence. Extreme bias is not specific to any political ideology. Bias itself isn’t always a bad thing, but extreme bias is a major problem for a peaceful democracy. Extreme polarization makes us far less tolerant of other people. It obscures information about “the Other Side,” so instead of understanding them, we perceive them to be evil and view them as an adversary, something to be destroyed or defeated. Instead of coming together to solve problems, we drift further and further away from one another — and if things get really bad, punches are thrown.

No matter which end of the political pole you lie on, violence is never justified. The mark of a civilized society is one that fights bad speech with good speech, not fists.