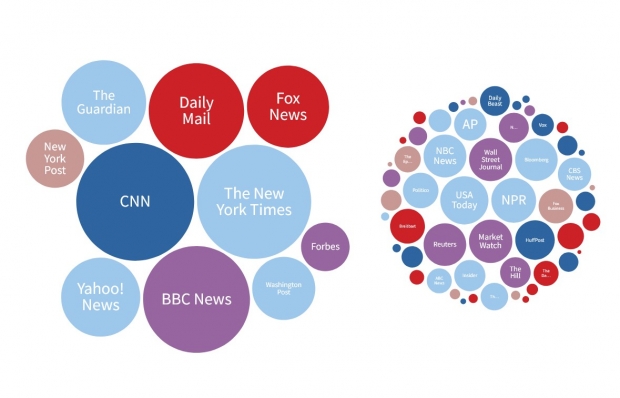 The AllSides Media Bias Chart™ might give the false impression that all of its featured outlets are read equally, when in reality, some have much more influence than others.

Pulling back the curtain and seeing which news sources people actually read can give us a better understanding of how the news media relates to the public. For instance, an AllSides analysis found that a handful of news websites get read more often than the next 50 sources combined.

Furthermore, and perhaps unsurprisingly, liberal news sources get visited far more often than conservative outlets. Sources with a Media Bias Rating of Lean Left in particular got many more site visits over a three-month period than outlets with other bias ratings.

In fact, outlets we rate as Lean Left and Center accounted for the majority of online news traffic. Meanwhile, outlets rated Left and Lean Left got roughly 375 million more site visits than Lean Right and Right outlets in July 2022, demonstrating their greater influence on the media landscape.

RELATED: How Should We Address Differences in News Outlets’ Audience Sizes?

Which News Sources Are Visited the Most?

AllSides gathered website traffic data for all 64 news outlets featured on the AllSides Media Bias Chart™ from the months of June, July, and August 2022, sourced from SimilarWeb. This included pageviews, not reach, meaning we measured how frequently a site was visited, not how many individual people visited it.

Here are the top 10 online news sources on the AllSides Media Bias Chart™:

The top 10 outlets account for twice as many site visits as the other 54 reviewed outlets combined. While outlets like CBS News (Lean Left bias) and The Daily Wire (Right bias) might find success in mediums like television and social media, they just don’t get as much online traffic as outlets like the New York Post (Lean Right bias).

This means that the top outlets, regardless of bias, have an outsized sway in the online news ecosystem. Any advantage a “side” has in news viewership can likely be attributed to two or three outlets.

As many would expect, Lean Left outlets got more site visits than any other bias group — by a lot. That advantage, bolstered by established sources like The New York Times, makes this group highly influential in the online news ecosystem.

Why Some News Sources Get More Attention Than Others

There are many possible explanations for why online news audiences don’t go to right-leaning media outlets as often as they go to left-leaning ones.

Many popular Lean Left outlets succeed because they are larger and older organizations that break more original stories than other outlets. This list compares magazines like The New Yorker (Left bias) and content hubs like The Blaze (Right bias) with established Lean Left news organizations like CBS News.

Or, perhaps people simply want to read daily news more than they want to read opinions on the latest political issue, and right-leaning outlets tend to be more commentary-heavy. On the other hand, sensational commentary could boost traffic, particularly on the fringes. A substantial portion of online traffic to Right and Left outlets comes from Fox News and CNN, which both combine established reporting operations with partisan commentary. In addition, right-leaning content is more prevalent in lists of the top U.S. radio and television shows than left-leaning content is.

Furthermore, the dominance of Lean Left outlets comes in part from the lack of Lean Right outlets. While major news sources may happen to see things from a more liberal perspective, sources that promote conservative perspectives often do so intentionally — thus allowing their biases to become more overt.

One possible explanation for the Lean Left/Lean Right imbalance is that journalists themselves tend to hold more liberal beliefs. A 2014 poll found that only 7% of journalists identified as Republicans, compared to 28% identifying as Democrats and 50% identifying as Independents. Partisan identification overall was down from 2002, when 18% were Republicans, 36% were Democrats, and 33% were Independents.

There could be several reasons for this; perhaps liberals are more likely to become journalists, or perhaps conservatives are less interested in reporting. Or perhaps Republican politicians just do more things that journalists don’t like.

That’s not the only way journalists differ from other groups; they’re also much more likely than the general public to think some sides deserve less coverage. In a 2022 Pew Research Center (Center bias) poll, 55% of journalists agreed that “every side does not always deserve equal coverage,” while just 22% of U.S. adults said the same.

How does your media consumption compare to the rest of the media market? Do you get most of your online news from outlets we rate as Lean Left?

How often do you read news from outside the top ten most-read outlets? Or do you rely on one of them for all your news?

How you consume news directly impacts your worldview. Getting a wider range of news can help us build a more accurate understanding of our communities, our country, and our world. The AllSides balanced newsfeed helps to even out your news consumption by displaying top headlines from the left, center, and right, side-by-side so you can get a full view.