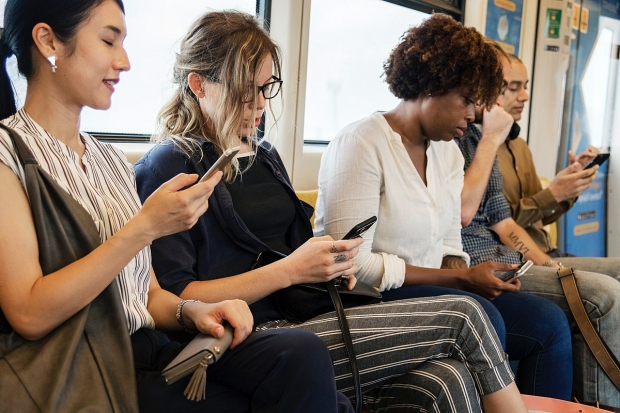 Here at AllSides, we do our best to curate news from diverse sources, which helps expose our readers (and us) to different perspectives. Not all news sources are equal, however; some outlets have much larger audiences than others. This means their coverage, and therefore their bias, carries greater weight in the media landscape.

As with any large organization — whether it be business, government or news — scale brings greater social responsibility. Facebook, for instance, was just a place for people to socialize online until it became the place to socialize online. Its size allowed it to have such a significant impact on American civic life that its founder was called to testify before Congress. Similarly, when news outlets corner a large enough section of the news market, their choices start having significant effects on how society at large engages with the news.

Let’s take a look at the current distribution of news audiences across some major media outlets. There are many ways to measure this, but for now we’ll focus on two: website traffic and social media audience. 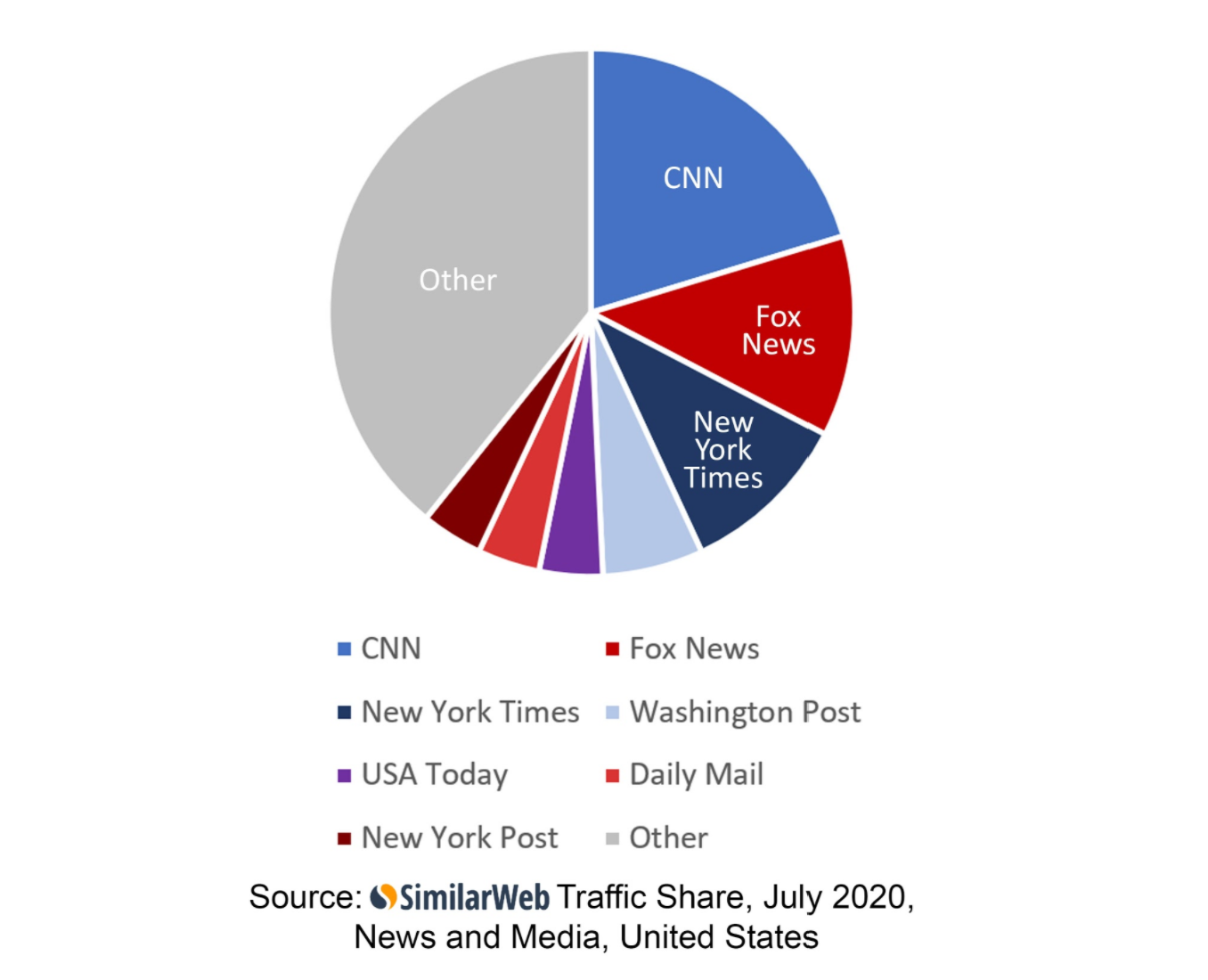 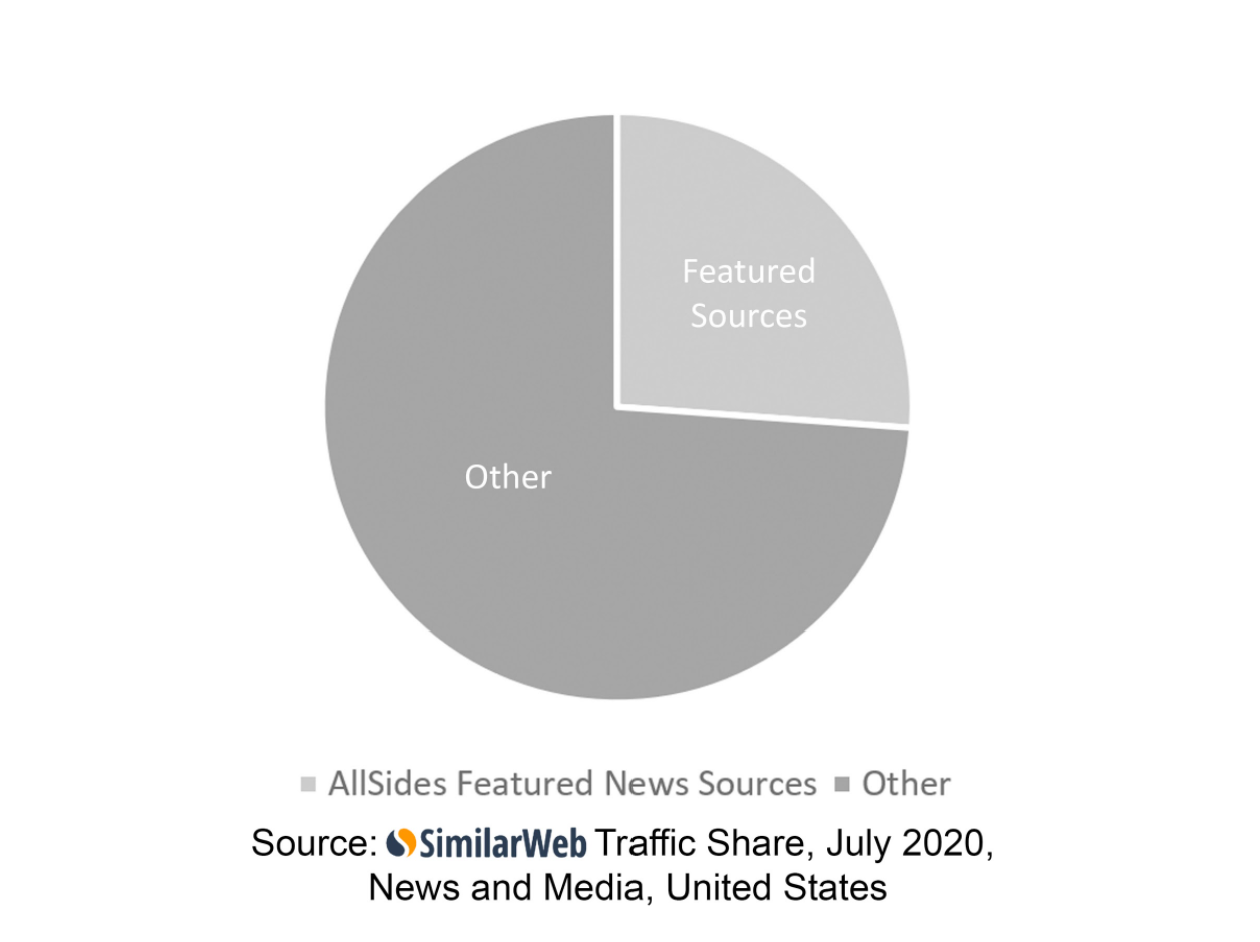 When we zoom out, however, the combined online audience of AllSides’ featured news sources pales in comparison to the total U.S. web traffic for all “News and Media” sites. Yahoo.com alone accounted for over 17% of U.S. web traffic (2.4 billion site visits!) in this category for the month of July, with MSN and Google News accounting for 3% and 2% respectively.

According to data from Pew Research Center, about one in four Americans gets their news from a news website or app. Thus, the charts above represent a truly significant portion of American news consumption. The same data, however, shows that about one in five Americans get their news through social media. According to Pew, this group also tends to be less knowledgeable and less politically engaged, suggesting different implications for outlets with large social media audiences. 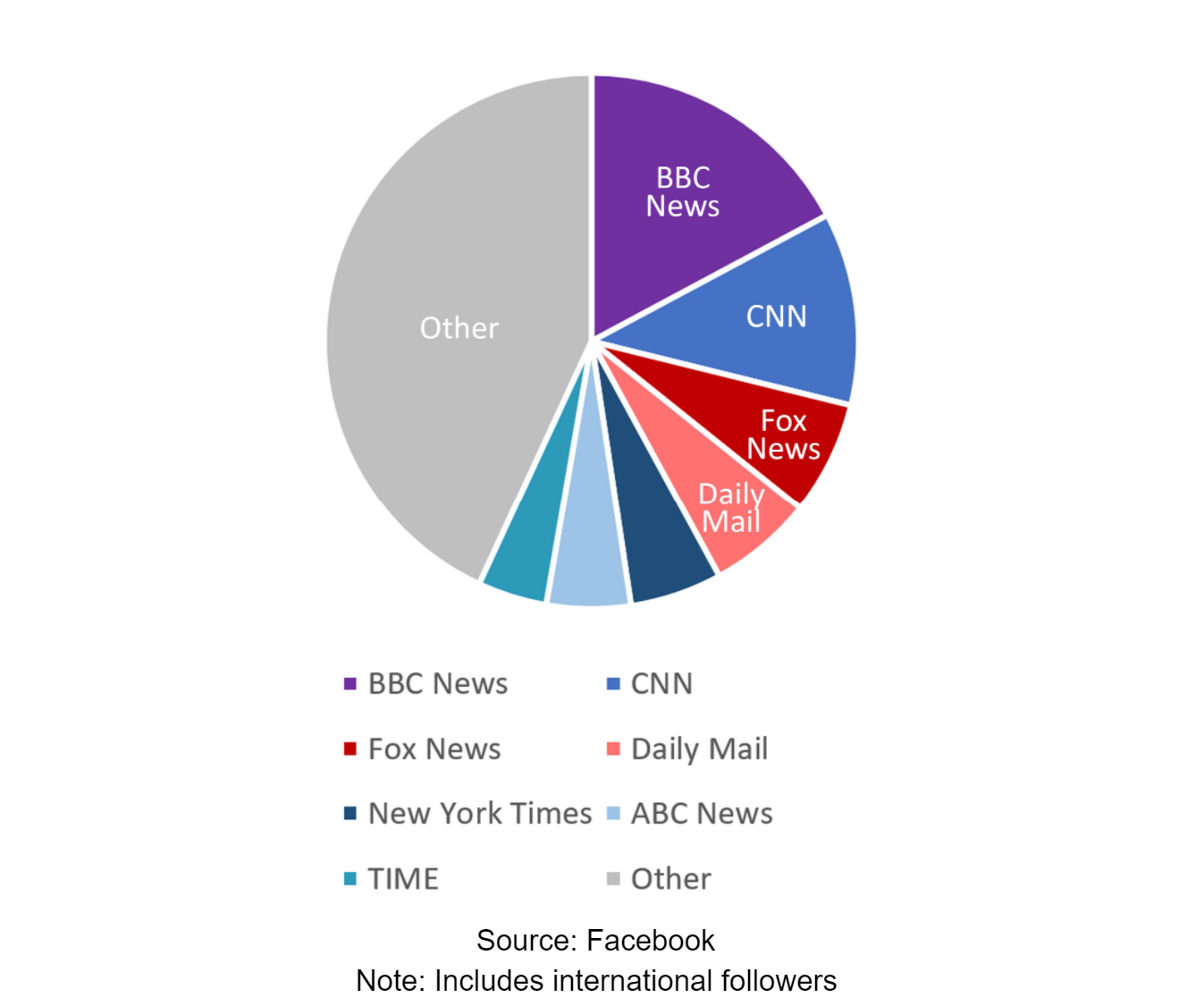 Of our featured news outlets with a Facebook presence, BBC News and CNN account for over a fourth of the total audience. Most of these top outlets have a left or lean-left bias rating, with Fox News and Daily Mail representing the right. 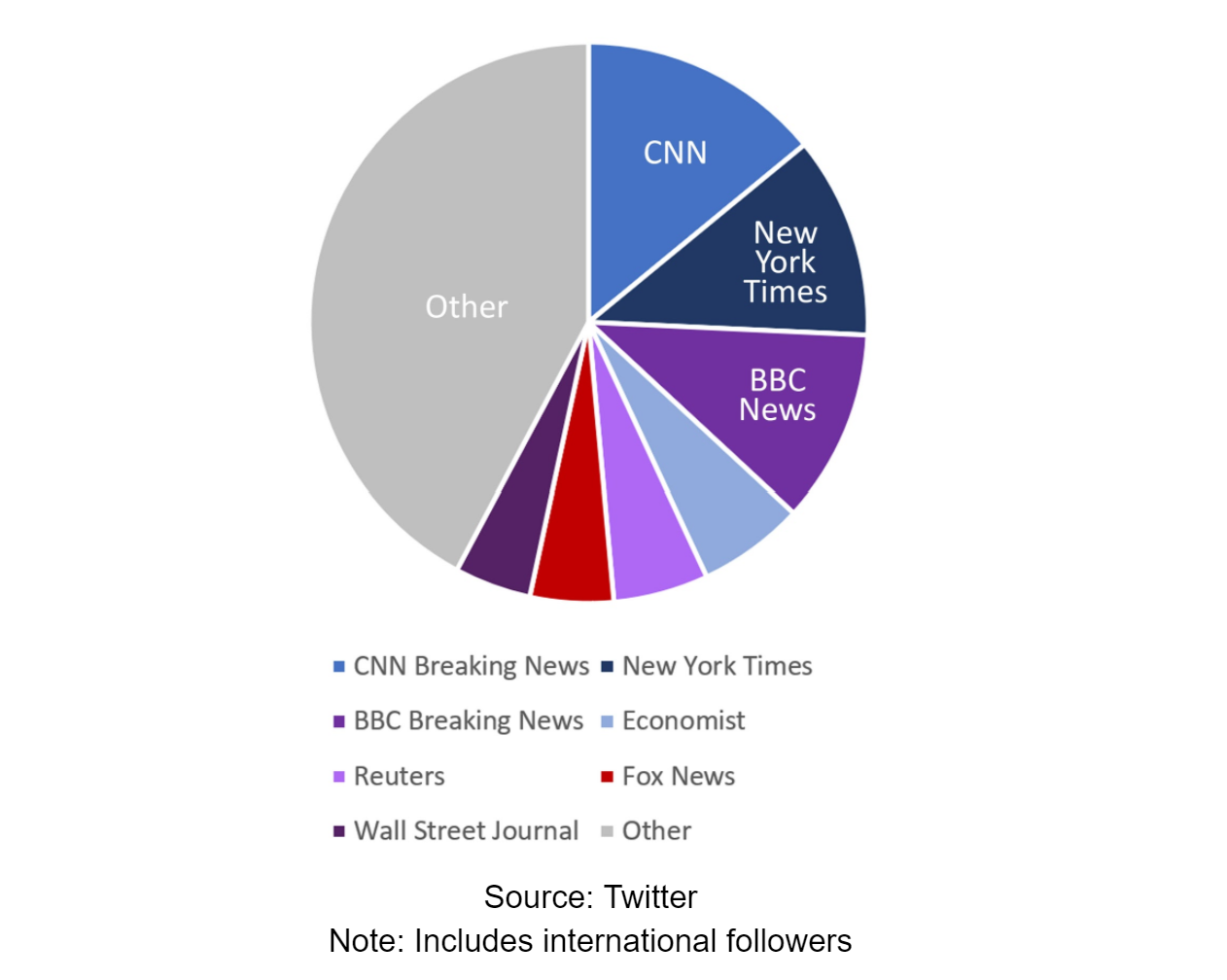 Notably, the top outlets on Twitter include more center-rated outlets than on Facebook. Here, Fox News is the only standout right-rated outlet, with CNN and The New York Times accounting for a fourth of featured news sources’s Twitter followers. This inequality would likely deepen if this analysis included the alternate accounts for each outlet (@BBCWorld, @BBCWorldAsia, @BBCNews, etc.).

We can see a few trends across the different audience measurements. Among the 43 featured news sources, CNN, Fox News and (to a lesser extent) The New York Times reach significantly more people than other sources. The differences in scale continue with smaller outlets as well; a third of featured news sources have over 10 million Twitter followers, a third have between 10 and 1 million, and a third have less than 1 million. On Facebook, only the top 8 featured outlets have over 10 million followers.

These trends can also be viewed through a lens of left/right bias. While left-rated outlets tend to have the largest audiences, Fox News consistently dominates among right-rated outlets. This isn’t much of a surprise; it’s a well-documented fact that Fox News performs well in its media niche.

In AllSides’ news curation, these trends are intentionally set aside in the name of source diversity. This has some interesting implications for how AllSides’ news curation represents the news media. Think of it this way: in the U.S. legislative system, the Senate represents each state equally, while the House of Representatives represents states relative to their populations. Both methods of representation are utilized to make Congress function properly.

Right now, AllSides is like the Senate — representing news outlets as equally as possible. This is valuable because it helps us achieve our goal of “giving voice to perspectives often ignored.” Like the Senate gives Nebraska more legislative power relative to California, AllSides helps give more of an audience to smaller news outlets by trying to give their coverage an equal platform with big outlets. In practice, this usually means avoiding curating articles from a news source if we’ve featured it recently.

Meanwhile, news audience inequality is still actively shaping how media bias functions and whose bias gets a platform. Even if AllSides represents each outlet and its bias equally, some outlets’ biases will continue to have an outsize effect on American politics and culture.

AllSides’ mission is to equip people to understand and resist news media bias. It’s arguable that if we haven’t addressed this issue, we haven’t done our job.

This has led some of us at AllSides to consider how we might use AllSides to address audience size inequality without compromising source diversity. We’re currently considering including site traffic data in each news outlet’s description page, but we’d like to get your opinion too.

How do you think we should tackle this issue? What kinds of information would most help you understand the scale of news media bias? How might we display audience size information in a way that makes your experience more informative? Send us an email to let us know!

This piece was written by AllSides Daily News Specialist Joseph Ratliff. He has a Lean Left bias.