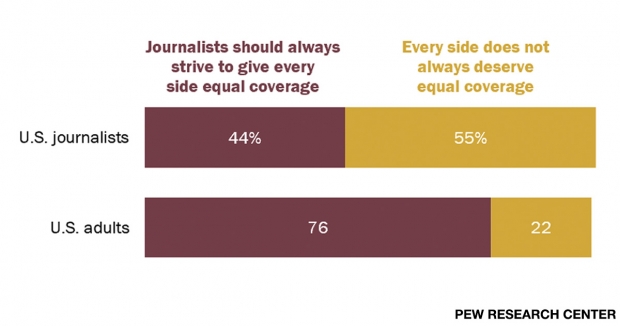 Over half of U.S. journalists (55%) say they believe that every side doesn’t always deserve equal coverage, according to a survey by Pew Research Center (Center bias).

Younger journalists and those who say their outlet has a left-leaning audience are most likely to say equal coverage is not always warranted.

There is a major gap between what the public thinks and what journalists think on this issue, too — 76% of U.S. adults think that journalists should always strive to give every side equal coverage, compared to 44% of journalists. 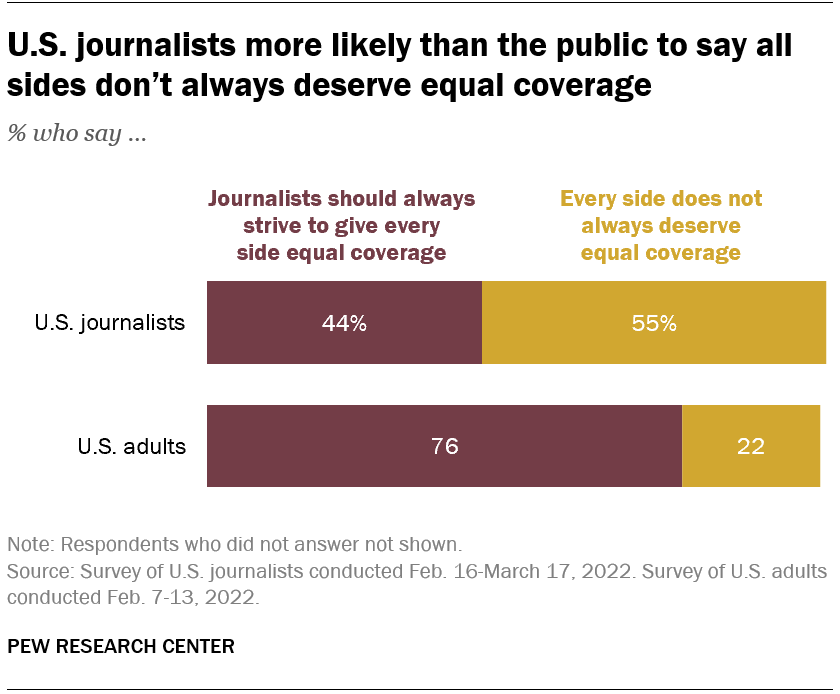 Among younger U.S. journalists (ages 18 to 29), 63% say every side does not always deserve equal coverage. Journalists 50 and older, however, are evenly split between the two viewpoints. 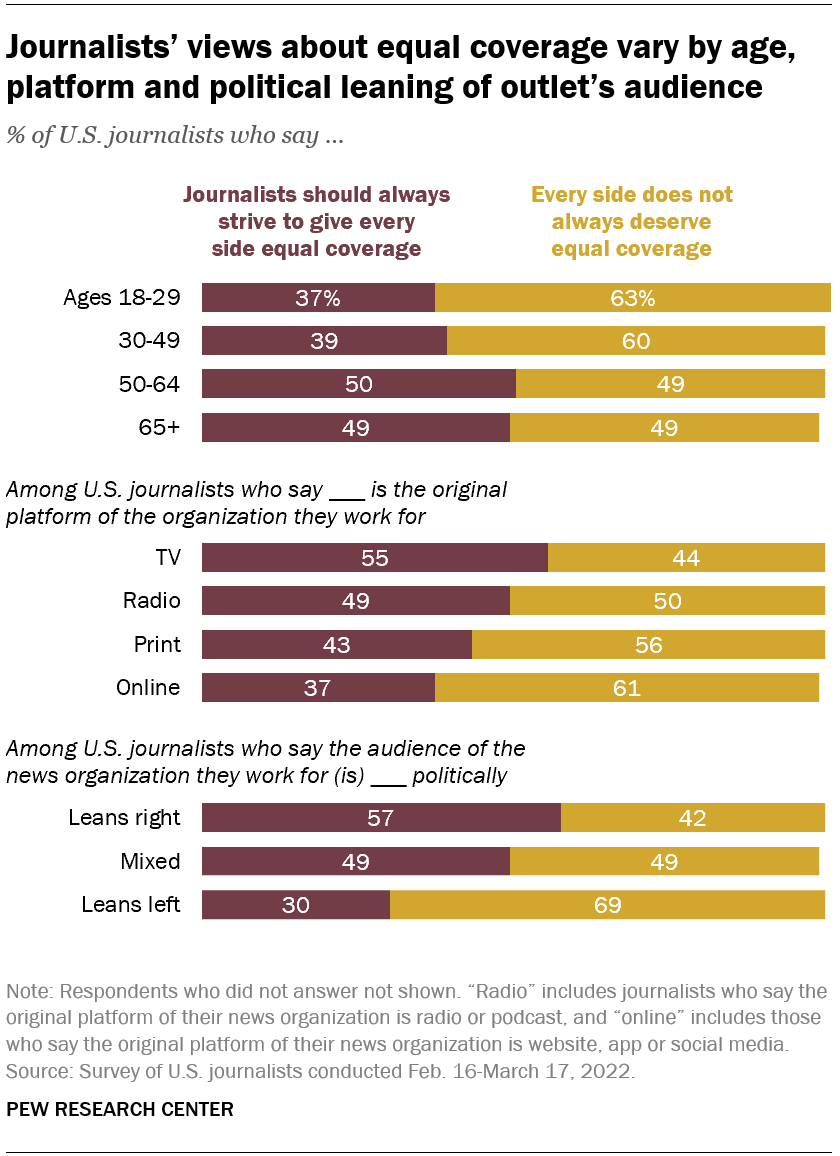 A separate survey found that of 46 countries around the world, the U.S. ranks dead last in news trust, with just 26% saying they trust the news most of the time, according to a Reuters Institute Digital News report. Could this be because some readers do not see their views given a fair shake in the press?

Journalists will always have to make subjective decisions about which voices to highlight and what information to cover. But whereas giving each side fair and equal attention is viewed by the public as a  key principle of traditional journalism, recent political polarization in our country has led to a mindset that some sides are so terrible or misinformed that they don’t deserve a platform in the press at all. Some journalists now feel they have a duty to not give a megaphone to what they view as false narratives or harmful ideas.

This goes beyond the typical concerns of false equivalency, such as giving a “fair shake” to genocidal regimes or flat-earthers. Now, because a viewpoint might be seen as one that represents the views of a certain political side or agenda, biased journalists may deem it unfit for mention in their work — further fueling the divide.

This is laid bare in the Pew data, which found that journalists who are worried about misinformation are more likely to say that not every side deserves equal coverage. 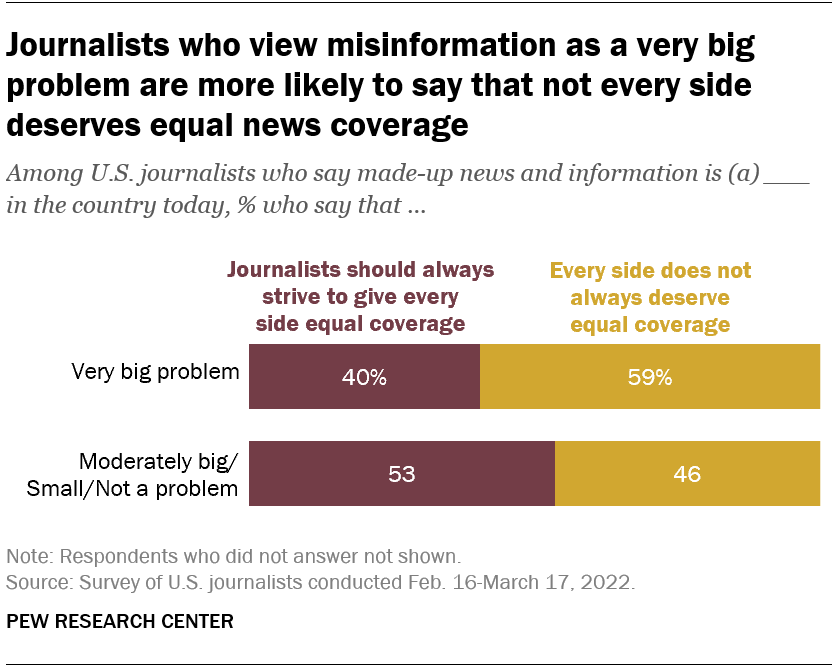 The idea that some perspectives don’t deserve to be covered because they are “wrong” or “bad” can lead to one-sided, biased news, in which perspectives the journalist does not agree with are omitted. This is why we created the AllSides balanced newsfeed, which allows you to get a broader view and see if a media outlet is not covering a certain angle.

When a journalist doesn’t cover all relevant sides, it’s a type of media bias called bias by omission. It’s closely related to slant, which is when journalists tilt their coverage by highlighting one particular angle (or playing down another angle). It can include cherry-picking voices or data to support one side, ignoring another perspective, or burying alternative views at the very end of the article, where they are less likely to be read. AllSides developed a resource guide to 16 Types of Media Bias to help you learn how one-sided news bias manifests.

Related: 16 Types of Media Bias and How to Spot Them

Of course, the issue of which sides to include in journalistic writing is not that simple. Journalists will generally include views that are within the Overton Window — the range of views that are considered acceptable in a society. This is why you don’t see op-eds advocating for slavery or pieces arguing the earth is flat in The Washington Post (Lean Left bias) or The Federalist (Right bias). Those views are considered to be outside the bounds of acceptable thought or policy, so they’re typically not included. Societies will always consider some perspectives as crossing the line.

The problem is when views that many Americans share, or perspectives on ongoing, unresolved issues are omitted from news pages.

Journalists are tasked with recognizing which views are truly extreme or on the fringes, while making sure they are not unfairly silencing legitimate voices worthy of being heard. And complicating matters further, just because a view is on the fringes doesn’t necessarily mean it is wrong or unworthy of being heard and explored — consider that the idea that cigarettes and sugar were bad for your health used to be fringe views.

More subtly, journalists also have to decide what information or evidence is relevant to a story, and their political bias may cause them to deem some things irrelevant that others would find relevant.

In most quality journalism schools, students historically have been taught to see themselves as neutral observers — people whose job it is to objectively describe what both sides are saying, to explore issues in depth, and to let the reader issue a judgment call for themselves. They are taught to strive for balance, and are typically taught not to see themselves as being in the role of arbiter.

But with a lack of proper training and emphasis on this — either from professors or editors — many journalists omit voices they think are “bad” or “harmful,” even if those perspectives are common or shared by many. This amounts to advocacy journalism or even propaganda, in which the journalist is trying to convince you of one side. Without balance on important issues, journalists do a disservice to the reader, who will not have enough information to make their own decisions and may grow to resent media institutions who consistently exclude their point of view.

Democratic societies are constantly debating what acceptable views are, and what we will sanction or disallow. If important or credible perspectives are unfairly ignored, these views may leave the Overton Window forever, without ever having been given their fair shake.

For example, imagine if voices arguing that black people should be allowed to eat at restaurants were never heard. We’d be living in a very different society today.

Journalists will always have a tough job, and humility is required. Journalists must recognize that their own judgment may not always be the right one or shared by all, and that other views ought to be explored.

While society engages in debate about key issues, readers need to be able to see all sides of an issue so that they can make judgment calls for themselves. This is why AllSides believes our mission of getting people out of their filter bubbles ultimately improves our democratic society — democracies cannot function without a free flow of information that gives multiple perspectives.