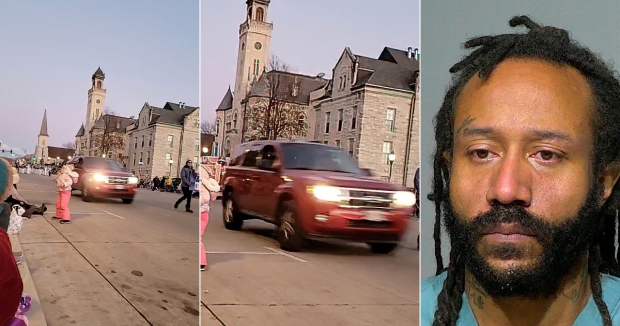 Some have accused the media of bias in their reporting of a recent attack in Waukesha, Wisconsin in which at least six people were killed and 62 were injured after a man drove an SUV through a Christmas parade.

Some commentators have accused CNN (Left) and The Washington Post (Lean Left) of committing bias by omission, as their reports did not assign a human agent to the incident and instead said an SUV carried out the attack.

Police have charged Darrell Brooks Jr. with six counts of intentional homicide; he is accused of driving his red Ford Escape SUV into a crowd of people. A police officer who witnessed the attack said the suspect carried out an "intentional act to strike and hurt as many people as possible," according to a criminal complaint filed in Waukesha County Circuit Court.

Yet CNN caught heat for stating on Twitter that “a car drove through a city Christmas parade, killing six people and injuring scores of others.”

Waukesha will hold a moment of silence today, marking one week since a car drove through a city Christmas parade, killing six people and injuring scores of others.https://t.co/QMNccpBI0y

The article’s preview text on Twitter also assigns the act to a car, reading: “The city of Waukesha, Wisconsin, will hold a moment of silence and light the city up in blue on Sunday, marking one week since a car drove through a city…."

According to Newsmax (Lean Right), The Washington Post tweeted and then deleted a message saying the incident was "caused by a SUV." The following screenshot of the tweet was circulating on Twitter (AllSides did not see the tweet firsthand): 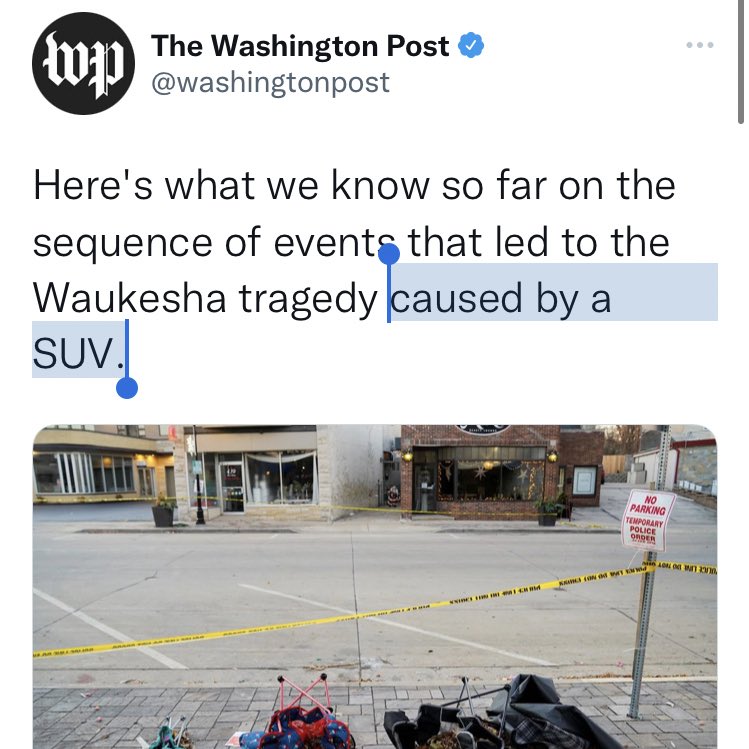 The article linked by The Post details how the event unfolded, and repeatedly refers to “the SUV” taking action, instead of the person accused of carrying out the attack.

Of note here are Washington Post and CNN’s use of passive voice, which is when whoever or whatever is performing the action is not the grammatical subject of the sentence. This can be a way to show bias by taking the focus off of the agent.

Some, mostly on the right, pushed back on CNN and Washington Post, accusing them of bias.

Nicholas Fondacaro, Deputy Managing Editor for Media Research Center (Right) and NewsBusters (Right bias), responded to CNN’s tweet by tagging CNN’s Weekend Supervising Editor: “Hey, @CNNKeith, what is up with this headline and tweet of your article? Maybe tell the headline writers and the social media team to do better. Also, you didn’t mention the car had a driver nor the name of the driver until the end, why?”

“A “car” did this? Not a human being with intent to kill and maim and being held on $5 million bail? You guys are a joke. @CNN,” tweeted Buzz Patterson, Candidate for the California House.

Professor and media critic Jeffrey McCall spoke to Fox News (Right bias), arguing that the media has not focused enough on the Waukesha attack, stating that they chose to downplay the story because “the facts didn’t align with the predetermined narrative," a sentiment others echoed.

Fourth Watch (not rated by AllSides) editor Steve Krakauer, a former CNN digital producer, wrote in his newsletter that CNN did not include information about Brooks’s past, which includes a conviction of aggravated battery with intent to cause great bodily harm, a Nov. 2 incident in which he allegedly ran a woman over and punched her in the face, and an outstanding warrant in Nevada for skipping bail on a sex crime charge.

"These points were missing from recent reporting from CNN. In fact, not only have most outlets avoided digging into Brooks and a potential motive, they've avoided Brooks' involvement altogether," Krakauer writes.

Some bias can also be seen in which stories are racialized and which are not.

Outlets like Washington Post and CNN frequently mention the race of people accused of crime, and have recently established editorial standards for whether the words “black” and “white” will be capitalized or not when referring to someone’s race. Choosing to mention or not to mention race can show a bias, and clue us in as to whether or not a reporter thinks that aspect is important to the story.

The Washington Post, for instance, frequently notes the race of those accused of crime or wrongdoing for some stories, including in the recent coverage of Kyle Rittenhouse during his high-profile criminal case (referring to him as a “White teenager”); they also repeatedly mentioned the race of the three white men who were recently on trial and convicted of killing Ahmaud Arbery in Georgia last year. They never mention the race of the Waukesha suspect, including in a profile of him. Mentioning or not mentioning race shows slant, which is a type of media bias when reporters highlight, focus on, or play up one particular angle or piece of information.

Some argue that the Rittenhouse and Arbery cases had clear racial angles, while others argue there is no evidence of racial issues in those cases. It’s the same in the Waukesha case, with some arguing Brooks may have been racially motivated. While police have not released a motive in the incident, some, such as Krakauer and journalist Andy Ngo, imply that Brooks’ social media posts may offer a clue, with Ngo noting he “expressed black nationalist antisemitic views.” The day after the incident, police said the incident was “not a terrorist event” and that Brooks was released from prison days prior on $1,000 bail and was leaving the scene of a domestic disturbance when he ran his SUV into the parade.

Media outlets have to be careful in their reporting when it comes to those accused of crime, and give time for court cases to play out and all the details to emerge. Jumping ahead of the justice system can mean ascribing false motives or even highlighting those wrongly accused. But the degree to which media is careful in its reporting of criminal cases shows bias, as AllSides discussed on a recent Instagram Live about the Kyle Rittenhouse case.

Media outlets show bias by omitting details or choosing to play up or play down specific details about criminal incidents and their perpetrators. Be on the lookout for bias by using AllSides’ balanced newsfeed to compare story coverage.