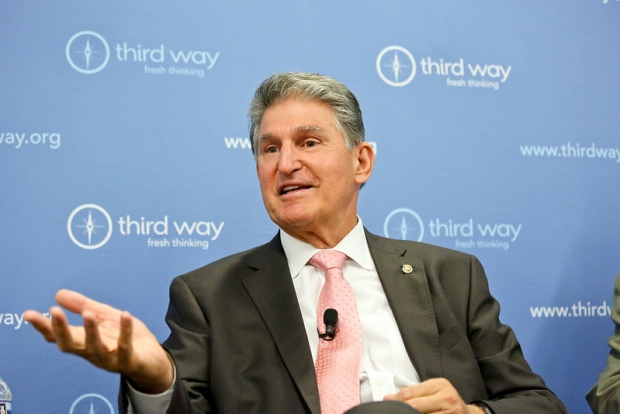 The Inflation Reduction Act (a scaled-back version of Biden’s defunct Build Back Better legislation) recently passed in the Senate after over a year of negotiation. Worth roughly $740 billion, the bill contains many different provisions for energy, healthcare, climate change and other needs -- and media outlets across the political spectrum showed bias in which features of the bill they highlighted or ignored. Outlets on both sides of the political spectrum covered the legislation very differently, typically reflecting the partisan opinions on the bill.

With all Republicans opposed, Democrats were able to pass the bill by a 51-50 vote with senators Joe Manchin (D-W.Va.) and Kyrsten Sinema (D-Ariz.) on board. The legislation is the largest climate bill the U.S. has ever passed.

What is in the Bill?

Related: Would the 'Inflation Reduction Act' Boost Savings or Raise Costs for Americans?

Perspectives From the Left

Many on the left are happy that this bill got passed after it looked bleak during negotiations. But some still remain dissatisfied with what was cut from the bill in order to get the necessary votes.

Slate (Left bias), calls out the $35 price cap on insulin and tax increases on private-equity single-owner corporations as important sections of the bill that were cut. Some of the other aspects of the bill that were cut in negotiations are universal pre-K, childcare and elder care aid, child tax credits, housing funding, earned tax income credit expansion, closing the Medicare gap, millionaire surtax, ending carried interest, tax rate hikes, community college, and immigration reforms. Even with all that Democrats conceded to get Sinema and Manchin on board with the bill, outlets on the left have celebrated many different parts of the legislation.

The same Slate article also highlights the increase in IRS enforcement funding, stating that between 2010 and 2020 they saw a 40% drop in key enforcement personnel. Stating that the IRS has not had enough funding to do its job, Slate argues this bill will make the rich pay their fair share of taxes.

CNN (Left bias) posted an opinion piece with writers Van Jones and Jessie Buendia emphasizing several things that excited them about this bill including greener transportation, lower energy costs, neighborhood investments, and an increase in job opportunities. The opinion piece focuses on the tax credits given to low-income families in order to help them afford solar panels and electric vehicles which will lead to lower utility costs and gas prices for families. Tax credits for disadvantaged communities combined with tax credits and grants for the manufacturers in those areas to switch to greener technologies will improve the pollution in neighborhoods, according to Jones and Buendia. Lastly, they highlight that the new technology will bring in new jobs, saying that if the bill passed the house, “we could see the single greatest investment in climate change and underserved communities than we have in years.”

Related: 0.25% or 0.33%? Democrats’ Inflation Reduction Act wouldn’t lower prices by all that much, analysts say

Overall, the left is praising the climate aspects of the legislation. Paul Krugman, writing for The New York Times Opinion Section (Left bias), posed the question, “Did Democrats Just Save Civilization?” calling the bill “a huge step in the right direction.” Vox (Left bias) said, “arguably, [the bill is] one of the single biggest investments ever made on climate in the world.”

However, the left is split on how much the bill will actually impact inflation. No one is claiming that inflation will immediately reduce, but Vox frames the impact of the bill as one that will help combat inflation for years to come. Meanwhile, Bloomberg (Lean Left bias) reported on a UPenn study that states the bill will have virtually no effect on inflation. Bloomberg states that the researchers’ modeling found inflation “may rise over the first few years, up to 0.05 percentage points in 2024. It would then create a 0.25 percentage point fall later in the decade. ‘These point estimates, however, are not statistically different than zero,’ they [Penn Wharton] wrote.”

Regardless of the immediate impact on inflation or the deficit, the sweeping climate and Medicare reforms are enough to deliver a win for the Biden administration in the eyes of the left.

Perspectives From the Right

The right, on the other hand, is more focused on the monetary consequences of the bill. They emphasize the minimal impacts on inflation and the deficit and critique the Medicare and tax reforms packaged in the bill.

Tommy Hicks for The Daily Caller (Right bias) calls the bill “Another Bidenflation Scam.” He focuses on the impacts of the new tax policy, stating that middle class families making less than $400,000 would end up paying more in taxes and points out hypocrisy from Joe Manchin. Citing a 2010 quote from Manchin in which he said, “I don’t think during a time of recession you mess with any of the taxes or increase any taxes,” Hicks writes that America is in a recession, yet Manchin agreed to increase taxes. Manchin has disputed the claim he supports raising taxes on families, telling Fox News (Right bias) that the bill only closes pre-existing loopholes rather than increasing any taxes on individuals or corporations.

Hicks also mentions a report by the National Association of Manufacturers, which argues that the 15% minimum corporate tax would hurt manufacturers and eliminate jobs. Hicks says the bill will increase energy prices and force Americans to buy expensive electric cars rather than affordable gas-powered cars. He also briefly touches on estimates that the bill would not reduce inflation.

The bill will actually raise inflation, and is a $369 billion handout to special interests, according to Jack Spencer of the Washington Examiner (Lean Right). Note that according to the summary provided by Senate Democrats, $369 billion (or 85% of all investments) will go to climate change and energy, which suggests the focus is on something other than reducing inflation. Many outlets on the right mocked the name of the bill itself, often using quotes to emphasize the “so-called ‘Deficit Reduction Act.’”

A prominent crique on the right is that the increase in IRS funding in the bill will primarily impact middle class families and small businesses as opposed to the super rich. The New York Post (Lean Right) argues that the new IRS agents could be weaponized, citing the IRS’s previous tax leak scandal as an example. One of the concerns is that if the IRS does impact middle class families they will not have the money to fight the IRS in court.

Several other outlets on the right honed into the effects (or lack thereof) on the national deficit, including the National Review (Right bias) and Reason (Lean Right bias). The piece from the National Review highlights the Congressional Budget Office’s analysis that over 90% of the budget deficit reduction advertised by the bill won’t take effect until 2026.

Reason stacks the bill up against existing spending for comparison, stating, “That $300 billion reduction created by the bill is the expected total amount over the next decade…the 10-year deficit has increased by about $2.4 trillion since President Joe Biden took office, thanks to items like the American Rescue Plan, the bipartisan infrastructure package, and this year's budget omnibus bill.”

While there is speculation about how much this bill may help or hurt inflation in the deficit for years to come, the Wall Street Journal Editorial Board (Lean Right bias) leverages a critique with more immediate consequences. Their article presents the Medicare price controls in the bill as a price increase for all of the other privately insured Americans. They say that providing Medicare patients with a steep discount on drugs will force companies to compensate by upcharging everyone else on the drug.

While the left and right agree that the impact on inflation won’t be substantial, they frame that impact quite differently; while Vox portrayed the long-term effects positively, outlets like National Review and Reason minimized them. Overall, the left and the right presented the bill differently, with the left focusing on successful climate change policies and the right focusing more on monetary costs to the American public.

At AllSides we encourage you to read both sides using our balanced newsfeed, so you can make up your own mind. Is this a historic investment in the global fight against climate change? Or is it a poorly-branded partisan bill that only raises prices for consumers? You decide.