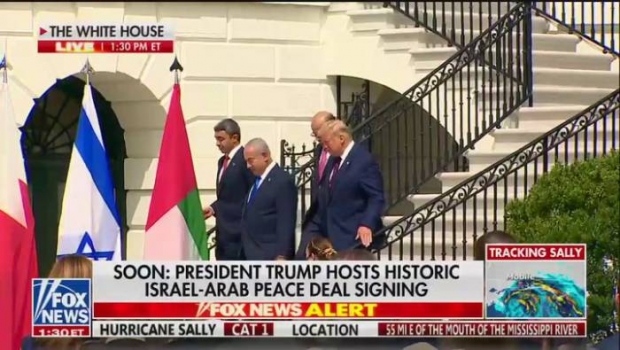 On Tuesday, the United Arab Emirates (UAE) and Bahrain signed a series of peace deals with Israel, likely paving the way for full normalization of relations between the countries. The deals, known as the Abraham Accords, were brokered by the Unites States. The UAE and Bahrain are the third and fourth Arab nations to normalize ties with Israel, and the first to do so since Jordan in 1994. Palestine is reportedly angered by the deal, viewing it as betrayal by their Arab allies.

Coverage from right-rated outlets tended to frame the peace deals as a win for President Donald Trump; coverage from center- and left-rated outlets tended to focus on the details of the accord and what it means for the countries involved. Some voices from the right criticized left-rated media outlets for purportedly ignoring the peace deal and not crediting Trump. Some left-rated voices framed the deal as a half-baked attempt to boost Trump's reelection push.

On the Blog: On the heels of the allegations, many are waiting for confirmation or denial from former Marine Corps Gen. John Kelly, the president's former chief of staff; and in a case of media bias by photo, The Hill faced criticism for misleading imagery regarding a recent Trump campaign rally.

More from AllSides: Media Bias Alert: Media coverage of the taped conversation between Trump and journalist Bob Woodward was decidedly partisan; and here at AllSides, we do our best to expose readers to different perspectives. However, some outlets have much larger audiences than others. How should we address those differences?; AllSides created a Facts and Fact Checking portal, where you can see the latest fact checks on a variety of topics and issues; you can also now support our work and mission by becoming a sustaining member of AllSides. Sustaining memberships allow you to read AllSides ad-free.

"Much of the media attempted to downplay the Israel-UAE-Bahrain agreement. NBC News chief foreign affairs correspondent Andrea Mitchell insisted that the Abraham Accords don't amount to "Middle East peace." CNN spent much of its programming focused on the potential health risks of the White House event that was held to commemorate the accords amid the pandemic.”

"...Biden’s main argument was reportedly that Trump had “put Israel in danger,” despite the peace agreements, because he had withdrawn from the Iran nuclear deal, and the Iranian regime was enriching uranium. However, an intelligence trove seized by Israel and revealed by Israeli Prime Minister Benjamin Netanyahu in 2018 showed that Iran had never intended to suspend its nuclear program. The deal allowed it to resume its work after roughly a decade."

"There were three documents signed today, reflecting the multiple parties in the room...The “Abraham accords declaration” was signed by Trump, Netanyahu and the foreign ministers of the UAE and Bahrain. It focuses on the intentions of all the parties to promote peace in the region; A "peace declaration” between Israel and Bahrain – a general document short of an agreement which will include a commitment by both parties to draft a peace treaty; and the Israel-UAE peace treaty. The treaty will come into force only after a vote in the Israeli cabinet and in the Israeli Knesset."

"The historic signing of the Abraham Accords in Washington this week represented a turning point in Israeli relations with the Gulf states and potentially could be a major shift in how Israel relates to many other states in the region...The region has a habit of swallowing up optimists and ruining their plans, however. Past assumptions about the Middle East entering a new era have sometimes proven incorrect."

"Israel’s real enemies, Hamas, Hezbollah and Iran, had no less enmity as a result of the accords. By way of a reminder, as the documents were being signed, the sirens were going off along the Israeli coast, and six people were injured by rocket fire from the Gaza Strip. The conflicting Israeli and Palestinian claims on territory and security, the impasse which had prevented diplomatic breakthroughs in the past two decades, was overcome in Tuesday’s White House deals simply by being ignored."

Trump’s Middle East Deal Is Good. But Not That Good.

"In this process, the Abraham Accords were something of a reality check, a confirmation of a Middle East landscape that had radically changed since the Oslo Accords were signed at the White House in 1993...But a true Middle East peace deal will require an accommodation with the 4.75 million Palestinians in the West Bank and Gaza, a people who have been denied a homeland for more than seven decades."

See other big stories from this past week, including news and perspectives about the West Coast wildfires.