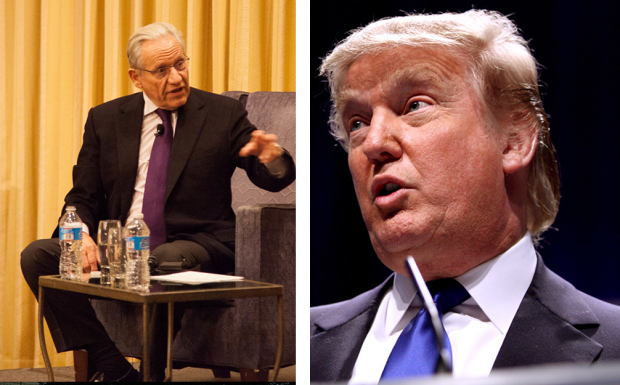 Outlets on all sides are zooming in on this quote and others from Trump, who spoke in 18 taped on-the-record interviews with Woodward between last December and July. Critics are also investigating Woodward’s decision to reveal the quotes now rather than immediately; the recordings will form the heart of his book, “Rage,” an inside look at the Trump presidency scheduled for release next week.

Trump’s public downplaying of the virus’ severity so as not “to create a panic” has been at the heart of most news coverage about Woodward’s tapes — coverage that’s often been influenced by various forms of media bias, based on which side of the media it’s coming from.

News reporting from several prominent left-rated media outlets injected subjective judgments and framing into their coverage of the news — common types of media bias including spin and mind-reading.

The Associated Press (whose politics section AllSides recently re-rated as Lean Left, after extensive review) published a news report with the headline “‘Deadly stuff’: Trump’s own words bring focus back to virus”. The piece focuses on Trump’s public handling of the virus.

Try as he might to change the subject, President Donald Trump can’t escape the coronavirus.

In April, the president tried to shift the public’s focus to the economy. In July, to defending the country’s “heritage.” In September, to enforcing “law and order.” But all along the way, the death toll from the coronavirus continued to mount.

From the start of the piece, the AP is framing Trump’s management of the coronavirus pandemic as undeniably poor. A similar tone continues throughout.

Roughly halfway through the article, the author cites previous “devastating revelations” involving Trump during his presidency:

For all of that, Trump has faced devastating revelations of his own creation before and survived them. They stretch back to his 2015 comments questioning the heroism of Sen. John McCain, a decorated Vietnam prisoner of war, or the notorious “Access Hollywood” tape that emerged just before the 2016 election in which Trump described sexually assaulting women.

Deciding whether or not these events are related is a subjective judgment largely based on the author’s perception of whether or not the past events should influence the societal impact of the most recent event. This judgment may or may not be valid, but is akin to analysis, and should be left out of a so-called news report.

The Politico article, however, focuses more on the specific recordings, the subsequent media attention, and Trump’s self-defense. In several paragraphs like the one below, the writer describes Trump fielding questions from the media right after the news broke:

When asked if he felt the outcome of the pandemic could have been different had he been more forthcoming to the American people, Trump said his response showed leadership. He declined to take responsibility for not reducing the 200,000 deaths from the disease in the United States, claiming millions more would have died had he not shut down the country to foreign visitors.

Saying the president “declined to take responsibility for not reducing the 200,000 deaths” suggests Trump is directly responsible for coronavirus-related fatalities. Again, this is a subjective perception that belongs in an explicitly-labeled opinion piece, not a news article.

Like in the AP piece, the Politico writer also ties the news to other recent events that paint the president in a negative light:

The damaging recordings come in the final weeks of a general election campaign which has seen the coronavirus emerge as the most important issue to voters, and as the White House is already deflecting reports of Trump disparaging the U.S. military and America’s war dead.

A purportedly balanced news article from Bloomberg (also recently re-rated as Lean Left) showed explicit media bias both in the headline — “Trump Unable to Escape Virus Fallout as His Own Words Haunt Him” — and in the very first paragraph:

Donald Trump’s bid to focus his re-election campaign on anything but the pandemic hit another setback Wednesday, as the president acknowledged publicly downplaying the threat of the coronavirus in February even though he knew it was dangerous.

Using “escape” and “haunt” in the headline implies that Trump is guilty of wrongdoing — that there is something to run from or something bad following him. This is an example of spin. In addition, describing his reelection bid as such is mind-reading, and is not backed up by stated facts. Calling the news a “setback” also suggests that the president’s reelection chances will surely suffer from the news, despite no cited evidence to support that insinuation.

Right-rated coverage was also biased, but in a much different way. This bias was less due to subjective analysis inserted into what is passed off as a hard news report, and more apparent because of biased story selection — a common type of media bias known as slant.

Headlines and reports from many right-rated news outlets concentrated on the president’s defense of his statements. Coverage also focused on individuals attempting to quell criticisms of Trump’s decision to publicly downplay the virus’ severity while privately acknowledging it to Woodward.

On "The Daily Briefing," host John Roberts asked Fauci if he thought Trump had played down the threat of the virus.

"No, I didn't," Fauci responded. "I didn't get any sense that he was distorting anything. I mean in my discussions with him, they were always straightforward about the concerns that we had. We related that to him. And when he would go out, I'd hear him discussing the same sort of things. He would often say, 'We just got through with a briefing with the group from the task force,' and would talk about it. So it may have happened, but I have not seen that kind of distortion.'

Shortly after audio of the Trump/Woodward interview was published, White House Press Secretary Kayleigh McEnany defended Trump, arguing that he acted like "good leaders" do by staying "calm" in the midst of a crisis. She added that the president "has never lied to the American public on COVID."

President Trump said Thursday if Bob Woodward was so worried about the fallout from his decision to downplay the coronavirus then the veteran journalist should have sounded the alarm earlier on.

Mr. Trump said Mr. Woodward is the one who should be coming under fire for withholding information from the American public if he thought it could save lives.

Similarly to the WashTimes piece, an article from the New York Post (Lean Right) titled “Trump tells Hannity he ‘wanted to show calmness’ amid COVID epidemic”, focused on recapping Trump’s Wednesday interview with Fox’s Sean Hannity, in which Trump reiterated that his intent was to avoid instilling fear. The article also prominently mentioned the president’s argument that his moves to restrict travel from China indicated his intent to protect Americans.

The president emphasized his moves on restrictions to certain travel from China as a decisive action to control the spread of the virus.

“I did something very important, at the end of January I banned China,” Trump said. “Nobody wanted me to do a ban on China.”

With this one-sided focus on display throughout coverage from these and other prominent right-rated news outlets, readers were missing out on the full story. By focusing mainly on the president’s defenders rather than giving equal attention to his critics, some right-rated outlets deprived their audience of balanced news.

Election season is an important time to polish your news-consuming habits. Seek out multiple perspectives on the stories you encounter, and be wary of how modern media is often built to profit off of you, not help you understand the world.

In addition to the comprehensive curation of news across the political spectrum in our balanced newsfeed, our Balanced Search technology allows you to sort Google search results from dozens of news outlets based on our media bias ratings.

And as always, in the event that you think we’ve missed a spot, send us an email.

"Donald Trump" by Gage Skidmore is licensed under CC BY-SA 2.0