Learn more about Lean Left ratings
Go to Google News
No Paywall
Our records indicate that content from this source is free to access. If this is incorrect, please email us to let us know.
Contents

Google News is a news media source with an AllSides Media Bias Rating™ of Lean Left.

What a "Lean left" Rating Means

Google News is a website and app developed by Google that aggregates news from around the world. Its AllSides Media Bias Rating™ is Lean Left.

Launched in 2006, Google News is one of the most popular news aggregation tools in the world. It has been scrutinized for allegedly suppressing right-leaning and conservative news and opinions while magnifying those on the left. AllSides has done extensive research on Google News bias; our 39-page research report on Google News bias, released in October 2018, found Google News is biased 65% toward Left and Left-leaning news sources. A separate audit by Northwestern researchers Nicholas Diakopoulos and Daniel Trielli found more evidence of Google bias. The audit revealed Google’s “Top Stories” section, which often appears at the very top of search results, favors a very small number of Left-leaning media outlets. 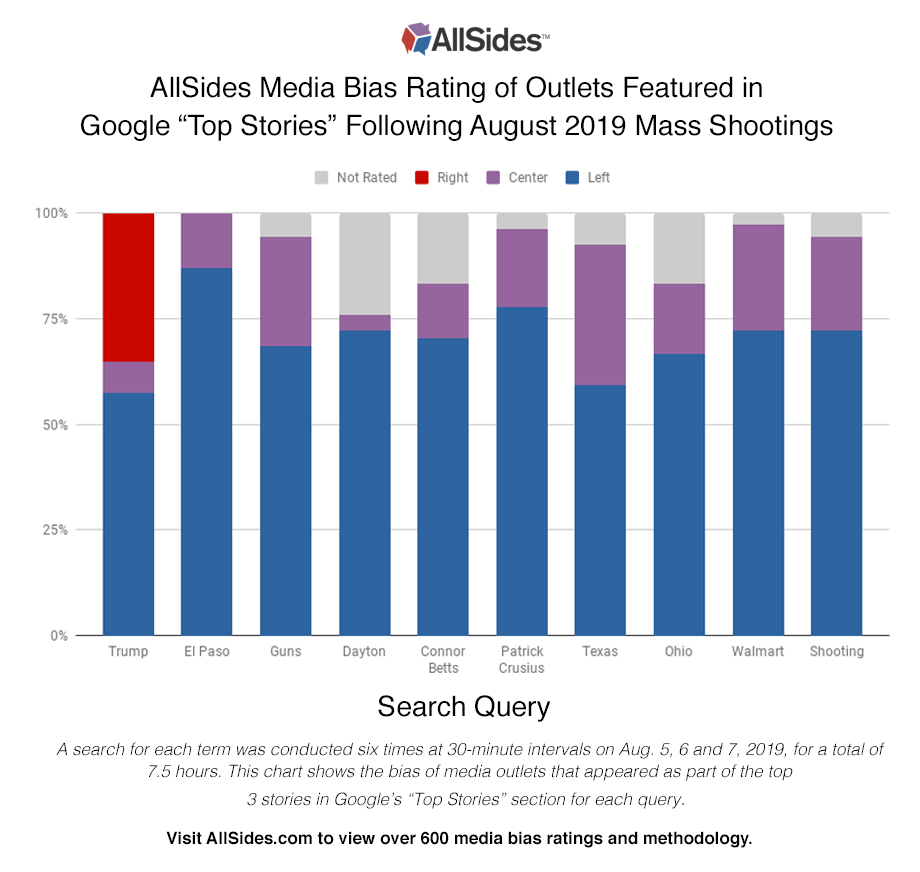 In August 2018, AllSides Google News bias study included 123 different measurements of Google News bias over two weeks, from August 23 to September 5, 2018. Eighty-eight of those measurements assessed the number of links that pointed to media sources AllSides rates as Left, Center, or Right. Because the vast majority of traffic goes to the very first links displayed on Google, AllSides also took into consideration link position. We gave the top 5 links more weight than those that appeared lower on the page.

The aggregate result indicated that the overall bias of Google News is 65% Left, 20% Center, 16% Right. View the AllSides study here.

The audit by Northwestern involved researchers collecting Google results for more than 200 queries related to the news (such as “colin kaepernick,” “earthquake,” “tax reform,” or “healthcare.gov”) in November 2017. They took measures to reduce the impact of result personalization and ran each query once per minute for 24 hours. They collected 6,302 unique links to news articles that appeared in the Top Stories section, with each link amounting to an impression each time it appeared.

Researchers found that just 20 news sources account for more than half of article impressions on Google Top Stories. 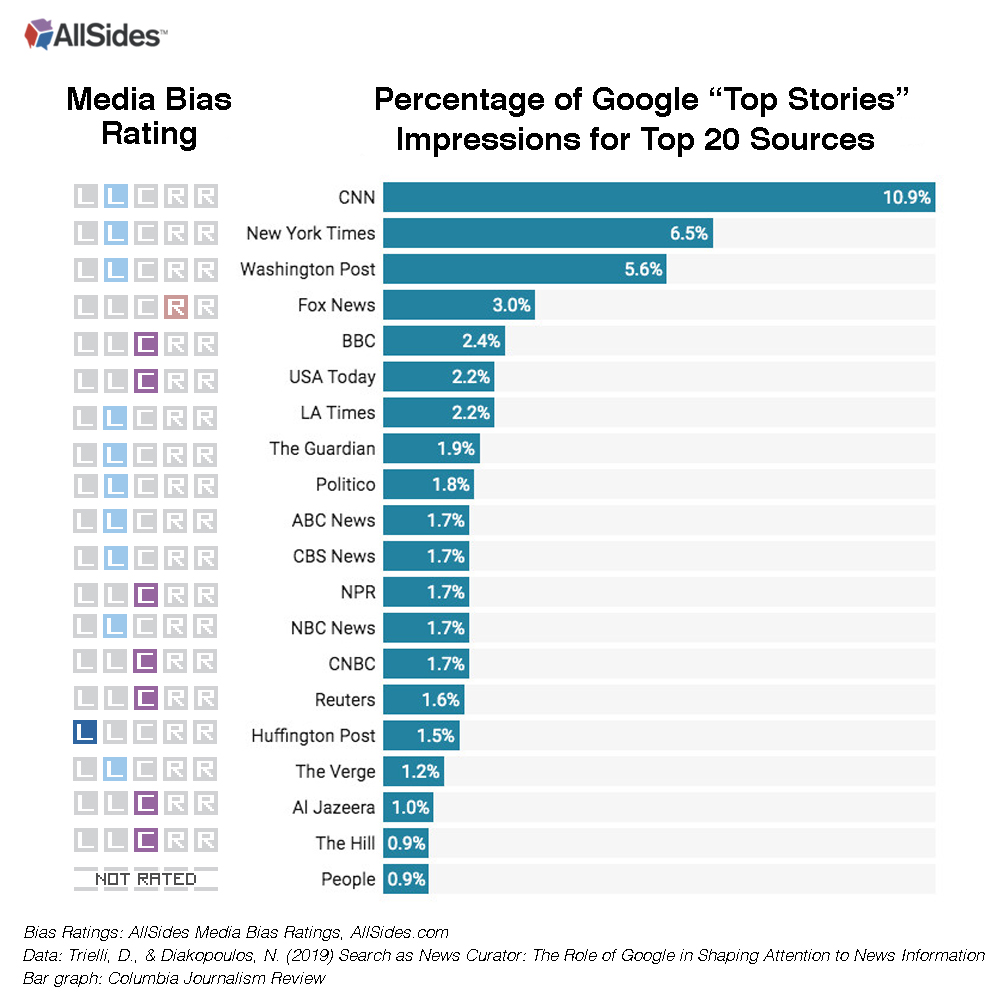 The top 20 percent of sources (136 of 678) accounted for 86 percent of article impressions. The top three accounted for 23 percent: CNN, The New York Times, and The Washington Post. Each of these outlets has a Lean Left AllSides Media Bias Rating. Learn more about this study on the AllSides blog.

In August 2018, President Donald Trump claimed Google is “rigged” against him, and that Google is “suppressing voices of conservatives.” In December 2018, Google CEO Sundar Pichai appeared on Capitol Hill and was grilled about bias, which he denied. In July 2019, President Trump held a social media summit to discuss alleged anti-conservative bias by big tech companies like Google, telling attendees "we’re not going to be silenced."

While AllSides has independently verified claims that Google News is biased to the Left, claims have also been made that Google's main search engine, as well as YouTube (which Google owns) are also biased against conservatives. For example, in late June 2019, YouTube removed a video created by Project Veritas (Lean Right media bias rating), a nonprofit founded by conservative James O’Keefe that is dedicated to exposing corruption. The video showed undercover footage of Google executive Jen Gennai discussing the tech giant’s search algorithm. Some of those on the right said Gennai’s comments confirmed Google is biased and that the search giant is taking a role in shaping elections. AllSides found the story was largely ignored by media outlets on the Left.

In October 2017, conservative nonprofit PragerU sued Google and YouTube for "unlawfully censoring its educational videos and discriminating against its right to freedom of speech." The lawsuit cited over 50 PragerU videos with a conservative bent that were “restricted” or “demonetized” by Google and YouTube. A judge threw out the case.

As of December 2022, people have voted on the AllSides Media Bias Rating for Google News. On average, those who disagree with our rating think this source has a Lean Left bias.

As of December 2022, AllSides has medium confidence in our Lean Left rating for Google News. Two bias reviews have affirmed this rating or multiple reviews have returned differing results. If we perform more bias reviews and gather consistent data, this confidence level will increase.