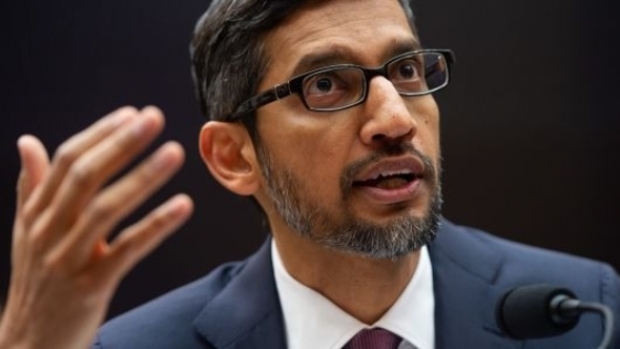 All eyes were on Google CEO Sundar Pichai as he traveled to Capitol Hill on Tuesday to testify on the company's privacy policies as well as perceptions that the platform is biased against conservatives. Unfortunately, lawmakers largely missed their opportunity, failing to get to the bottom of how the media giant contributes to the polarization seen in politics today. An in-depth Google bias study conducted by AllSides over the course of two weeks found Google News results are biased, with 65 percent of links pointing to Left-leaning media outlets.

Rep. Zoe Lofgren (D-CA) asked why President Trump's picture comes up when googling the word "idiot." Rep. Ted Poe (R-TX) held up his iPhone and pressed Pichai on whether he could track his whereabouts by tapping into the device. (Wrong company, Congressman Poe — Google makes the Android.) The questions danced around but did not succeed in digging into the question of the hour: Are Google's search results heavily weighted in one partisan direction, and if so, do they have an obligation to do anything about it?

President Trump has long asserted that their news section is rigged. That claim lacks sufficient evidence, but the platform certainly appears to be biased against right-leaning voices, albeit perhaps unintentionally.

Google operates on a popularity algorithm, which places the most prominent links and perspectives at the top of the fold. Since the majority of news outlets skew to the Left and most online news consumers lean Left, users see viewpoints that are associated with the mainstream. Great for maintaining the status quo, but not so effective at popping those pesky filter bubbles and allowing readers to decide for themselves.

According to the in-depth Google News bias study conducted by AllSides, the overall bias of Google News is 65% Left. Approximately 20 percent of links come from Center sources, and just 16 percent are from Right-leaning publications. AllSides provides media bias ratings for hundreds of media outlets, rating the outlets as Left, Lean Left, Center, Lean Right, or Right.

Rep. Steve Chabot (R-OH) inched closer to this, lamenting that "article after article opposing the Republican tax cut" filled the first several pages of search results before anything positive came in view.

Chabot should understand that, in reality, the algorithm really is behind the mayhem. But if Google wants to play a role in alleviating groupthink and the resulting polarization, perhaps it's time to head back to the drawing board.