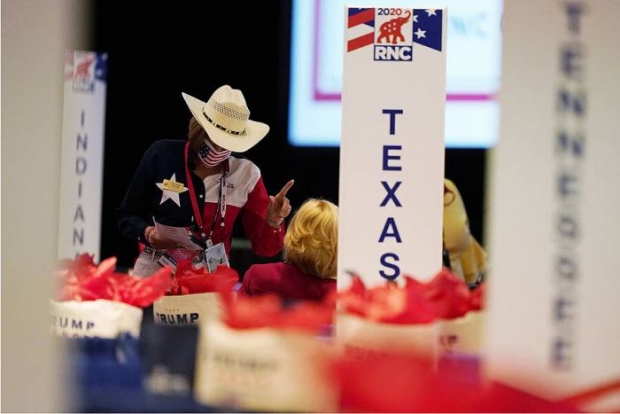 Coverage of the convention has often differed along partisan lines. Each side has focused specifically on TV ratings for each convention, often with different slants. Some coverage and voices in left-rated outlets framed the RNC rhetoric as ominous, and concentrated on purported falsehoods by RNC speakers. Some reports and voices in right-rated sources framed overall media coverage of the convention as biased, and contrasted the RNC's purportedly unifying and optimistic messages with the ostensibly gloomy themes of last week's DNC.

On the Blog: Sensationalist news is everywhere, and has become core to the modern media business model. Luckily for you, we're committed to eliminating sensationalism in our original content; to viewers, each convention may have made it seem like the Democratic and Republican Parties are operating as if they're in two entirely different worlds.

More from AllSides: Learn how AllSides curates news and represents diverse perspectives. Read our Editorial Philosophy and News Curation Principles; AllSides created a Facts and Fact Checking portal, where you can see the latest fact checks on a variety of topics and issues. You can also now support our work and mission by becoming a sustaining member of AllSides. Sustaining memberships allow you to read AllSides ad-free.

"Mrs. Trump and Mr. Pompeo both bucked tradition with their remarks. It is not typical for a sitting secretary of state to give political speeches, particularly while on a diplomatic mission overseas, and political activity is generally not conducted on White House grounds."

"President Donald Trump may prefer to focus on law and order, standing up to China, and the “socialist” Democrats. But COVID-19 remains by far the most important issue facing the nation in both impact and voter interest. It has reshaped almost everything about daily life in America – including the political conventions themselves. Many of the speakers at last week’s almost entirely virtual Democratic National Convention touched on the pandemic in one way or another. Former Vice President Joe Biden has promised a more forceful federal coronavirus response, including, if necessary, lockdowns."

"The Republican National Convention is underway, and it ­offers a hopeful, pro-American agenda that stands in stark contrast to the radicalism that radiated out of the Democratic National Convention last week. The Democrats’ convention ­revealed a disturbing truth about the party’s November ticket...While the DNC trotted out Hollywood celebrities and the old Washington political establishment to bash America and sow division, the RNC is celebrating hardworking Americans who make America great."

Like Joe Rogan, The RNC Will Thrive Because Corporate Media Fails

"Judging by the left’s reaction to the first night of the convention, they are still clearly too terrified and too ignorant to understand why it’s better for business and journalism to give people like the McCloskeys or pro-Trump Alvarez a fair platform...New media is thriving because of corporate media corruption. They’ve created an exploding demand for heterodox perspectives, perspectives that undercut the elite narrative that everyone to the right of Alexandria Ocasio-Cortez is bigoted, whether they’re black like Tim Scott or immigrants like Alvarez. The legacy outlets are losing their monopoly."

The RNC portrays Trump as he wants to be seen

"...every speaker has offered a view of the President that, no matter how divorced from reality, is the view he’s always wanted to see depicted on television. Trump’s self-produced television show — with his own editors and himself as the casting director — has achieved what near-daily complaints about news media converge and lengthy venting sessions to aides cannot: a depiction he finally agrees with."

What country does Mike Pence live in?

"During his acceptance speech at the Republican National Convention on Wednesday, Pence sounded as though he lived in some kind of fantasyland that perhaps had encountered a few tiny little bumps in the road. His party has spent the week claiming to represent “the common man,” but Pence spoke as though he knew next to nothing about the daunting challenges that Americans are having to deal with every day. The most he could muster was an acknowledgement that “we’re passing through a time of testing,” as though he were consoling a motorist after a fender bender."