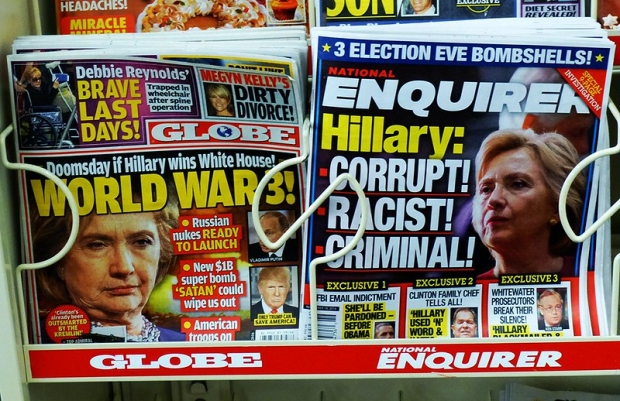 Modern media business models encourage journalists to seek engagement. Clicks mean success, right? If everyone is reading and sharing my work, haven't I done a good job? Plus I earn ad revenue! My audience is commenting like crazy, so I must be doing something right. Plus these numbers mean big bucks for me!

Not necessarily. In fact, some journalists aren’t really doing what (we think) they were trained to do.

Naturally, advertising and social media incentivize a type of media bias known as sensationalism: presenting information in such a way that it makes things seem more extreme or dire than they actually are. Sensationalism gives a shock or makes a deep, often emotional impression, with the goal of making you engage and share.

It’s a type of media bias that’s extremely common today, especially across the web. Some journalists may think it helps craft an engaging narrative or immerse readers in the story. However, AllSides has a standard of avoiding sensationalism in our original writing. Here’s why.

In the quest for audience engagement, journalists frequently push the boundaries on accuracy when describing content. This is especially true with how stories are characterized in headlines or social media blurbs, which can be re-shared widely and drive the circulation of knowledge — even if the characterization is misleading and over-hyped.

Some may argue that it’s hard to fault journalists for sensationalism if it’s part of what helps them keep their job and perform well in the eyes of superiors. Fine. But if an employee at a meat-packing facility is told to follow protocol that contradicts their training and understanding of ethics, I’d like to think they’d speak up and move to make a change in the name of public health. Whatever the cost of that change, it’s less than the human cost of potentially spoiled meat — or, in this case, spoiled information.

Clicks are essential to the journalism business, so sensationalism is becoming common. Unfortunately, sensationalism also stands at odds with the traditional pillars of journalism — balance, fairness, accuracy, and a desire to make readers more informed. The industry’s embrace of sensational tendencies flies in the face of its core values, and is part of the reason why many are losing faith in the media.

So what makes this so detrimental for readers? As my colleague Julie Mastrine expertly wrote in November:

“When we don’t know how to spot media bias or when we continually get only one side of the story, we cannot make a conscious decision about what we think. We become automatons, just repeating whatever we last heard. Being a smart media consumer means exposing ourselves to different perspectives and being open to changing our view.”

As described in our Editorial Philosophy, AllSides balanced news curation strives to reflect the media as it is across the political spectrum. But when it comes to our own original writing and analysis — as we frequently provide in our Headline Roundups and on our Perspectives Blog — we employ our own standards for word choice and how to describe content. Those standards include actively avoiding sensationalism. Commonly-used sensationalist words like “shocking,” “remarkable,” “lashed out,” “showdown,” and “scathing” won’t appear in our writing, except under extraordinary circumstances in which we have a strong reason to believe they are the most accurate and least subjective words to use.

If one politician takes aim at another, we’ll describe it as “criticism”, not as “blasting” or “slamming” or “ripping”. All may be technically accurate, but the latter three unnecessarily evoke strong emotion and distract from the subject matter.

If a prominent figure is accused of a violent crime, we’ll describe it as a “significant allegation”, not as a “bombshell claim” or an “explosive accusation”. Again, the goal is to inform you of the news, not to fire you up.

If someone says something that’s verifiably untrue, we’ll describe it as such with an appropriate fact check. We won’t call it a “flagrant lie,” a “blatant dismissal of the truth,” or an “appalling falsehood”. It’s our job to provide the info, not to pass judgments.

If something downright unusual happens, we won’t tease with phrases like “You won’t believe what happened with this,” or “Click to see a shocking moment caught on camera.” We’ll give the story to you straight, and let you decide how notable you think it is.

However, there’s times when sensationalism and accuracy go hand-in-hand. Some special events do warrant language that conveys deep impact. If the U.S. someday lands astronauts on Mars, we’ll almost certainly describe it as an “unprecedented moment in American history.” The same goes for when the first woman is elected president, or for when countries reach international agreements with world-changing potential.

We understand that using more inflammatory, emotional language in our everyday content would get us more clicks, more advertising revenue, and maybe even more notoriety. But that’s not our main objective. We want you to be informed, empowered, and confident in your own evaluations of the world. We’re here to point you in the right direction, not to manipulate you for our own advancement.

There are ways to get clicks without being sensational. Journalists just have to be more creative. As evidenced by our website's tremendous growth over the past year and through the COVID-19 coronavirus pandemic, avoiding such bias is both possible and sustainable. And with public trust in media on an apparent decline, now's not the worst time for a bit more balance.

So next time you’re reading one of our blogs or Headline Roundups, and you think, “Hmm, this language seems a bit more bland than what I’m used to,” remember that’s offered with your best interest in mind. Sensationalism might be embraced far and wide in modern news media, but not here at AllSides. We can do just fine — and even better than most — without it.

Henry A. Brechter is the Managing Editor of AllSides. He has a Center bias. Reach him at henry@allsides.com.