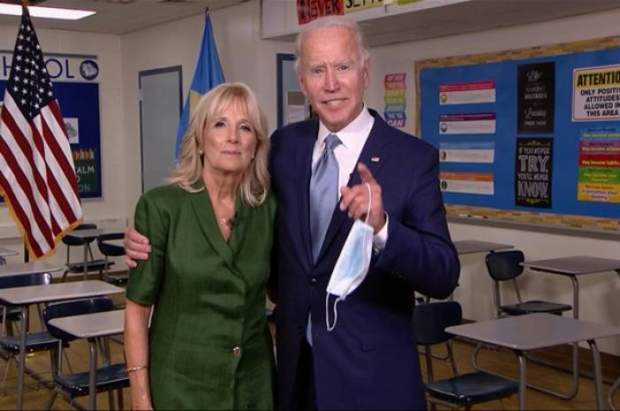 The Democratic Party kicked off its first virtual election convention on Monday, featuring multiple prominent speakers and portraying Joe Biden as the candidate who can pull the nation together amid racial justice protests and the COVID-19 coronavirus pandemic. The convention culminated Thursday night with Biden officially accepting the party's nomination.

On the Blog: A case of media bias by omission: national news initially ignored the case of Cannon Hinnant, a white child allegedly murdered while riding his bike by a black man; and media coverage of Biden choosing of Harris as his running mateonce again highlighted pernicious filter bubbles.

More from AllSides: Learn how AllSides curates news and represents diverse perspectives. Read our Editorial Philosophy and News Curation Principles; AllSides created a Facts and Fact Checking portal, where you can see the latest fact checks on a variety of topics and issues. You can also now support our work and mission by becoming a sustaining member of AllSides. Sustaining memberships allow you to read AllSides ad-free.

Democrats are against Trump — but what are they for?

"No doubt the pandemic and the shuttered economy have something to do with the current mood, and it’s typical for the out party to paint a dark picture to justify removing an incumbent president. But the messages of the first two nights have been long on pain and grievance and short on hope and faith. Perhaps the Dem Downers are right, that a majority of Americans see their country through the darkest possible lens. But I suspect the party is too much in the thrall of the activists who want to overthrow most of our institutions."

"The convention featured a video of an 11-year-old girl, Estela Juarez, whose mother was deported by the Trump administration. The clip featured Juarez's remarks about the pain her family felt after her mother was deported alongside clips of Trump discussing his policies...Members of Trump's campaign noted that the Obama administration was in power when photographs were taken of children in cages inside a detention facility. The video also overlaid audio of Trump, making it appear as though he called illegal immigrants "animals." That claim has been fact-checked several times and deemed false."

"Democrats know — and polling shows — that Biden’s supporters aren’t nearly as enthusiastic as Trump’s. But there are more of them. And unlike Trump, Biden hasn’t been crippled by his handling of the coronavirus pandemic or its economic wreckage. Biden is leading Trump by a wide margin nationally, and he continues to lead Trump in swing states."

Obama, Harris, and an Unconventional Convention

"So far, the Democrats have largely succeeded in creating a new and effective form of Convention, not so much with balloon showers but with nightly critiques of a calamitous and ugly Presidency and a series of emotional appeals to the country’s better angels. This Convention is a decidedly earnest spectacle...but, over all, this event just may end up playing a critical role for the Democrats in an election that is far from decided."

When the Democrats Tell Young People To Wait Their Turn

"Only Kamala Harris’ vice presidential nomination acceptance speech, and a 17-person relay race of young Democratic leaders teaming up to deliver a crowd-sourced keynote address represent anything more than a fleeting acknowledgement of what may lie on the other side of the party’s Biden Bridge. For Biden Democrats, it appears that the future can wait."

Progressives irked by spotlight on GOP at Dem convention

"The GOP’s prominent billing reflects one of Biden’s core arguments in the closing months of the campaign: He can appeal to and work with Republicans to bring stability to a Washington paralyzed by the chaos of Donald Trump’s presidency. But progressive Democrats seeking to exert influence over Biden argue that such outreach risks undermining the party’s principles and harkens back to an era of bipartisan cooperation that no longer exists."