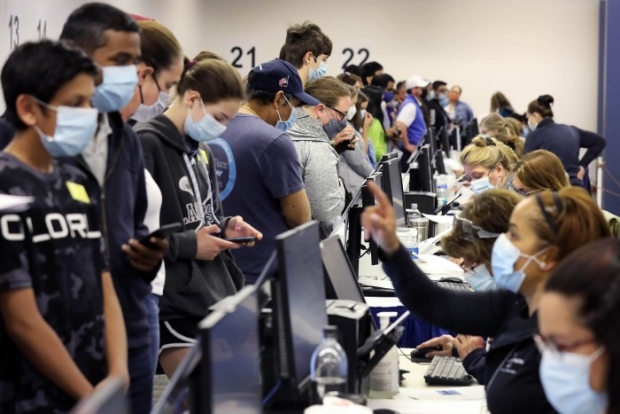 The COVID-19 pandemic continues to wind down in the United States as vaccination rates rise and communities ease their public health restrictions. The seven-day average numbers of new cases and hospitalizations in the U.S. are all at their lowest point since the beginning of the pandemic; the number of COVID-19 related deaths is also the lowest it's been since the start of last summer. As of Thursday morning, more than half of U.S. adults had been fully vaccinated; 19 states still require facemasks in most indoor public settings.

Media on all sides have covered the consistent statistical improvements and lifting of public health restrictions, most with positive undertones. Some left-rated voices expressed concern that restrictions are being lifted too early, citing the continued risk of infection and praising facemasks as a mark of a safety-first community. Many right-rated voices have lauded the loosened restrictions while remaining critical of the purportedly oppressive way governments and public health authorities handled pandemic restrictions.

"The misery in Gaza has been unrelenting. Israeli airstrikes have illuminated the skyline for 11 days, causing an inferno of destruction on the ground. The Gaza Health Ministry said on Thursday that the death toll from the bombing campaign had hit 230, with 65 children among the dead."

"There’s a risk, too, that the warmer weather and potential seasonality of the virus will in some sense give the country a false sense of security. By letting much of the US (though not all) safely socialize outside, while Covid-19 cases and deaths continue to decline, there’s a risk that people will move on from the virus too quickly — and the remaining unvaccinated will come to believe, if they don’t already, that they don’t really need to get the shot."

""The U.S. averaged roughly 24,000 new cases per day over the past week, a 20% drop from week before. Cases have fallen every week since mid-April. 38 states improved over the past week. Only four states saw their outbreaks grow."

"Some workers have taken to social media to cheer, but many others protested. Some don’t trust customers — or their co-workers — to be truthful about their vaccination status since most companies are not requiring proof. Others fear they will be judged if they leave their own masks on, even though their reasons for doing so are varied."

"As of 12:30 p.m. Tuesday, 49.8% of Americans 18 years old or older had been fully vaccinated, according to CDC data. At least 61.5% had received at least one shot of a vaccine, the data shows. Earlier this month, President Biden said he wanted to get at least 70 percent of Americans inoculated by July 4."

"Anthony Fauci, Biden's top COVID-19 adviser, said lifting mask mandates 'is really quite risky,' because 'when you pull back on measures of public health, invariably you've seen a surge' in cases and deaths. Rochelle Walensky, director of the Centers for Disease Control and Prevention, said she had a 'recurring feeling' of 'impending doom,' warning that premature relaxation of 'public health prevention strategies' could lead to a 'fourth surge.' More than two months later, the public health disaster predicted by Abbott's critics has not materialized."