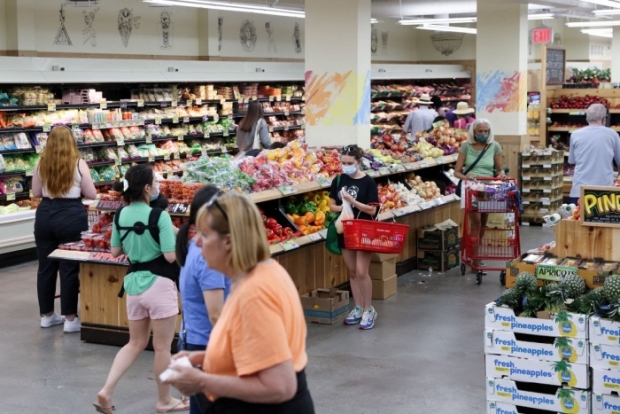 U.S. consumer inflation is at its highest level in four decades. What is the government doing about it?

President Joe Biden called on Congress this week to enact a 3-month federal gas tax holiday; reports from the left and right both say the measure has a slim chance of passing. The White House is also reportedly considering other measures to mitigate the effects of high gas prices, including sending gas rebate cards to millions of Americans.

The Federal Reserve also raised interest rates by 75 basis points last week, the biggest increase since 1994, in an effort to curb inflation and ease demand. Some economists see high interest rates adding to the risk of an economic recession. Chairman Jerome Powell said this week that a recession is "certainly a possibility."

In addition to energy costs, food and housing prices are both up significantly compared to recent years. The average interest rate on a 30-year fixed-rate mortgage climbed to 5.78% last week, the highest level recorded since 2008. In May, the cost of "food at home" in the Consumer Price Index (CPI) was 11.9% higher than a year ago, the largest annual increase since April 1979.

Inflation is a big story across the political spectrum, and many partisans blame the other major political party for purportedly not doing enough about it.

Both media coverage and voices on the right frame the Biden administration as incapable of reducing inflation on its own, and many express fear that inflation will only get worse. On the subject of gas prices, right-rated sources continue to paint Biden's clean energy agenda as an obstacle to lowering fuel costs.

Many sources and voices from the left frame the U.S. government's handling of inflation less negatively, and instead highlight inflation in more global terms, such as how OPEC heavily influences oil prices and how energy costs are also high in other countries. Many focus on high prices of goods around the world and their potential drivers, such as Russia's invasion of Ukraine, China's COVID-19 pandemic lockdowns, and heightened consumer demand after the pandemic.

Biden is considering lifting Trump-era tariffs to slow inflation. Here's how that may affect you

"It's not a simple decision and advisers within the administration are divided on whether to lift the tariffs. On the one hand, China has not lived up to purchase commitments it made during the Trump administration, and some US industries struggle to compete with China's unfair trade practices. On the other hand, Biden is eager to take any step that shows he is combating high prices. He could decide to lift some tariffs and leave others in place."

The GOP keeps slamming Biden over inflation, but it has no solutions to offer

"We all get how politics works. The party out of power blames the party in power for everything that’s bad. But in this case, inflation is directly impacting the lives of all Americans. It’s time Democrats and the media press every Republican who blames Biden for inflation to answer this simple question: What is the GOP plan to reduce it? Americans deserve an answer."

"Supply chain issues, once seen as a kink set to resolve swiftly once the global economy re-opened from COVID-19 pandemic-era lockdowns, have proved stubborn with China continuing to enforce periodic restrictions to curb the spread of the virus while Russia's invasion of Ukraine has caused a spike in energy and food costs."

Powell tells Congress the Fed is ‘strongly committed’ on inflation, notes recession is a ‘possibility’

"Powell’s remarks are part of a congressionally mandated semiannual report on monetary policy – more commonly known in markets as the Humphrey Hawkins report and testimony, for the act which mandated them...Over its past three meetings, the central bank has raised rates a cumulative 150 basis points – 1.5 percentage points – in an effort to tackle inflation that is running at its fastest annual pace in more than 40 years."

"In April, the Department of the Interior (DOI) announced it would proceed with the six oil and gas lease sales as part of a reformed federal leasing program that reduced land available by 80% and increased royalty rates for drillers. The administration said it would hold the sales because of a June 2021 federal court ruling blocking President Joe Biden’s attempted pause on all new leasing. The administration has yet to hold a single onshore lease sale over the last 18 months ago."

How to Fix Inflation

"By next year, inflation will likely be so unpopular that Americans from the far left to the far right will demand that Congress do something about it. If the Republicans regain some political power, an inflation-fighting bill will have to be their top priority. The bad news is that they will inherit a mess. The good news is that it won’t take rocket science to fix things, just a common-sense understanding of supply and demand, and a modicum of political courage."