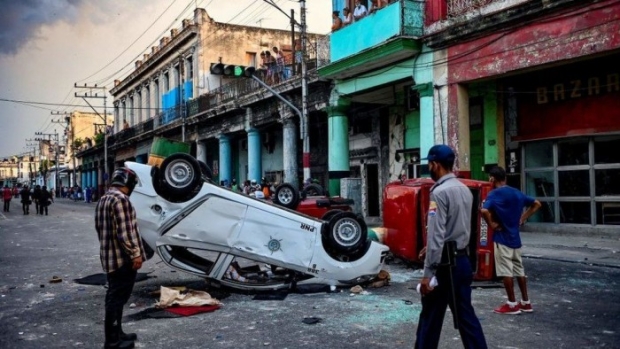 Thousands across Cuba rose up in protests this week, an uncommon uprising in the authoritarian country. Their cries covered many topics, from freedom and liberty to food and COVID-19 vaccine access. As a result, President Joe Biden criticized the Cuban government and said America stands "with the Cuban people and their clarion call for freedom." Cuban President Miguel Díaz-Canel has blamed U.S. trade sanctions for poor economic conditions in the country. The demonstrations were then picked up in South Florida, where some protested in solidarity with those in Cuba.

Despite being an international story, the protests made headlines across the spectrum throughout the week. Some coverage from left-rated sources pointed out the Trump administration's sanctions on Cuba and connected them to current poverty in the country. Most coverage from right-rated outlets highlighted the calls for freedom, and framed communism and Cuba's government in a negative light. Reports from the left more often highlighted Cubans' limited vaccine access.

Why has Cuba exploded in protests? It goes beyond the U.S. embargo and the pandemic

"Cuba’s strict measures during the pandemic were praised for having greatly limited the number of Covid-19 infections last year. But the success came at the expense of the economy. Cuba shut its borders for eight months with absolutely no tourism. Cuban Americans desperately tried to send medicine to relatives through agencies, but it took months to arrive, adding to the frustration."

Homeland Security chief says U.S. will not give refuge to those fleeing Cuba and Haiti by boat

"Mayorkas said those trying to reach the U.S. by sea will be intercepted by the Coast Guard and immediately returned to their home countries. Even if asylum-seekers manage to get interviews with U.S. officials, Mayorkas added, they will not be permitted to set foot on U.S. soil, regardless of the outcome of their screenings."

"While the scrapping of the import tax is seen as a rare concession by the government, its temporary nature has been a source of derision. With the Covid pandemic leading to a restriction in the number of flights arriving on the island, the effect the lifting of the restrictions will have is thought to be limited. 'No, we don't want crumbs. We want freedom,' government critic and journalist Yoani Sánchez tweeted shortly after the announcement."

"The Miami area has long been home to the largest Cuban exile community and a focal point for anti-Castro sentiment. The South Florida demonstrators sought to replicate the protests by thousands of Cubans on Sunday who denounced a deep economic crisis, shortages of basic goods and power outages in the largest showing of unrest in decades."

"Florida Republican Governor Ron DeSantis is calling on President Joe Biden to restore the internet to the Cuban people after the communist government shut it off. 'I write to urge you to assist in providing Internet access to the people of Cuba standing up against communist oppression and demanding a voice after decades of suffering under the yoke of a cruel dictatorship,' DeSantis wrote in a letter to Biden Wednesday night."

"BLM is calling on the Biden administration to lift all embargoes on the nation. BLM isn’t alone in blaming the U.S. for the ongoing protests in Cuba, with Independent Vermont Sen. Bernie Sanders also blaming the embargoes. 'It’s also long past time to end the unilateral U.S. embargo on Cuba, which has only hurt, not helped, the Cuban people,' Sanders said in a tweet. The U.S. embargo does not affect humanitarian aid donations."